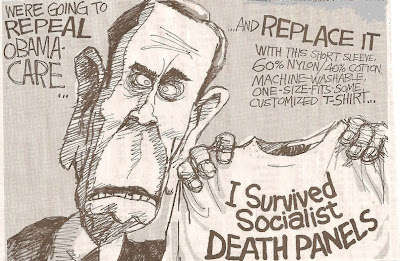 Now that the Teabagger contingent has arrived in D.C., they've made clear their number one priority is to "repeal Obamacare". They view it as anti-constitutional (and they're all carrying around their own copies of that document) but evidently they forgot to check the Preamble where it clearly states one mandate of government is to "promote the general welfare".

Note the words stipulate GENERAL welfare! Not military welfare, not corporate or business welfare, but GENERAL! What better way to accomplish that than to ensure every citizen has access to affordable health care? After all, a nation of sick citizens or comprised of those who are ill and can't afford to get care, is an unproductive and sick nation! Further, no nation that has mostly sick citizens or those too ill to actively seek care can even remotely speak of "pursuit of happiness". How can it if half its citizens may be getting seriously dehydrated from a prolonged bout of intestinal flu yet can't afford to seek care? The "pursuit of happiness" is possible only after basic needs have been taken care of!

Is this what the Teepees want? I guess so, to hear and see them blather away on the tube. I mean some of these characters are even more pompous, ignorant and arrogant than the ever bombastic Pastor Mikey! Where the hell do they get this chutzpah, given that most haven't been out of Podunk, Missouri or Pissants Grove, Mississippi before?

Anyway, what seems evident is that the constitutionality of the individual mandate is what will make it to the Supreme Court (eventually) and they will decide if citizens need to pay into this system or not. But do the Repukes really really know what they're getting into if the Court decides in their favor? Do they have any remote idea?

Are they prepared to see hard working people (whose "liberty" they're ostensibly trying to "protect") consume 50% or more of their income on health insurance? Or maybe 75%? With so little left to spend in discretionary income that the economy goes into the crapper again - like it did when people pulled in their wallets after the 2008 credit crunch? Have these self-righteous, liberty spouting bloviators processed ANY of this? No, I didn't think so!

In the meantime, what do these deficit charlatans want to do? (I call them charlatans, because at the same time their budget -pretentious party is pushing for $100 billion in spending cuts before they raise the debt ceiling, they allowed over $140 billion in tax cut extensions for the wealthiest - all amounting to a pure increase to the deficit with nearly zero benefit to the economy).

Well one of the first things they plan to try and kill out of the new health care law, is to take away the $850 compensation (for generic drugs) for seniors in the donut hole. Let's process this: currently seniors falling into this hole are trapped until they have to spend over $5,000 out of pocket for their medicines. With this donut hole fix in place, however, they can get help to buy generics up to $850 - which may likely save most from the ravages of either doing without food to pay for medicine, or the converse.

What the Repukes are proposing then, is to deprive hyper-voting seniors of this crucial assistance! Do they have any remote idea of how this can come back and bite them in the ass politically once seniors get word it is the Repukes responsible for forcing them to divide their Lipitor and Diovan into quarters?

Then their other item they want to go after at once is the part of the health care law that forbids insurers from denying care to children with pre-existing conditions. Currently, for example, a kid with some pre-existing condition like diabetes, or jaundice or whatever, can't beg, borrow or buy insurance. They are simply impeded from getting health care. What the repukes plan to do is to return families to this unconscionable condition of having to see little Jackie or Jill suffer as opposed to receiving life giving care.

Somehow, I just don't think that's going to play out very positively for the Teepee Repukes either, but we'll see.

Maybe families, people really are deluded, drunk, doped or dumb enough to vote for spending cutters at any cost - while little Jackie or Jill withers away from lack of care, or Gramps has to raid dumpsters to get enough crumbs or Kibbles to live off of - having already paid through the nose in the donut hole!

Nice move, Tea baggers!
Posted by Copernicus at 11:59 AM