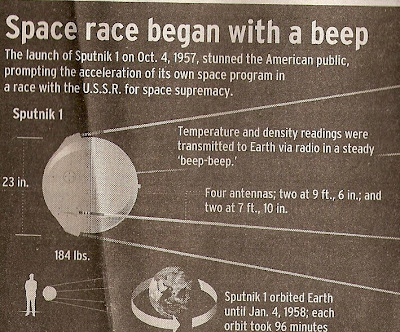 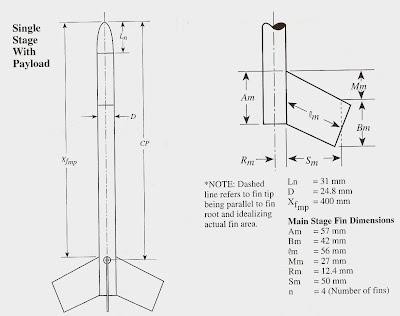 Rocket design I used to launch lizards, crickets and roaches (inserted into a cotton-lined payload section) to be part of the Rocket Age that swept the USA in the wake of Sputnik. 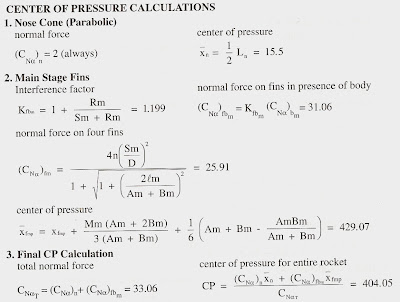 In his State of the Union address last night, President Barack Obama was mostly very fuzzy with the speechifying, only becoming exact and precise in a couple of places- including the necessity to not grant any further extensions of the Bush tax cuts.

The part that caught my attention was when he invoked the Russian satellite Sputnik - launched on October 4, 1957, in asserting "This is our generation's Sputnik moment" - in terms of a revival of American competitiveness. In this respect, he outlined initiatives in five areas: innovation; education; infrastructure; deficit reduction; and a more efficient federal bureaucracy (vowing to freeze federal spending for five years). He also pledged to increase the nation’s spending on research and development, as a share of the total economy, to the highest levels since John F. Kennedy was president, and vowed to prepare an additional 100,000 science and math teachers over the next 10 years.

For those who weren't alive at the time, Sputnik was a resounding event, and had the impact of a train collision on the American consciousness. As the attached graphic shows, Sputnik was a 184 lb. satellite that orbited the Earth every 96 minutes at an altitude of about 900 km (600 miles).

I was 11 at the time, and had much more interest earlier on that particular day (a Friday) in how my Milwaukee Braves would fare in Game 3 (the next day, Saturday) of the World Series against the New York Yankees - than in any space exploits. So far the Series was tied 1-1, with the Yanks taking the first game at Yankee stadium 3-1 on Oct. 2nd, and the Braves coming back to tie it 4-2 on Oct. 3rd.

So Oct. 4th was a travel day with the Series to resume in Milwaukee (I was living in Miami at the time, and had been since January, 1956). Because of this, the evening news of the Sputnik I launch had even more impact on me than it otherwise might have (say if a game had been played). The entire news was dominated by the weird looking craft and its 4 long antennae.

Some days later, we got the first radio 'beeps' from the thing. The signal had been picked up by an RCA receiving station at Riverhead, New York and relayed to the NBC studios in Manhattan, when most of us alive then in the U.S. heard it over the Huntley-Brinkley Report.

How did the nation react, as well as politicos? (This was during the Eisenhower administration which alas, for most of the population today constitutes ancient history!) According to Paul Dickson, author of Sputnik: The Shock of the Century, p. 20:

"Ross Perot recalled in a 1997 interview: 'This is just like Kitty Hawk, the world is forever changed and I'm going to be part of that new world.' Ralph Nader, then a third year student at Harvard Law School, told Air & Space magazine, 'It hit the campus like a thunderbolt'.

"Polls taken within days of the launch showed that Americans were concerned - so concerned that almost every person surveyed was willing to see the national debt limit raised and forgo a proposed tax cut in order to get the United States moving in space".


THAT - specifically - encapsulated what was necessary to translate THAT rhetorical Sputnik moment into a space competition that would ultimately see the United States reaching the Moon before the Russians. It disclosed a collective willingness to sacrifice financially, via raising the debt limit and rescinding a proposed tax cut, to achieve it. Compare that to the current predominant meme that "we've already spent too much" and factor in Obama's implicit cooperation with it by announcing a 5-year federal spending freeze ....at the same time as a putative "Sputnik Moment". Cognitive dissonance, anyone?

By the time of Sputnik's launch in October, 1957, the Russians were producing some 66,000 engineers a year compared to the United States' 22,000. In addition, the key subjects of higher math and physics were almost nowhere to be found in the U.S. secondary school curriculum - nor were there the teachers to teach them. All this had to be factored into the coming expense to get the U.S. on a competitive par with the Soviets. Teacher education and training alone came to over $1 billion by the time of the Apollo 11 lunar landing.

Let us also quickly understand and acknowledge the marginal highest tax rate was then 91% compared to a measly 36.5% now and that not even allowed to rise to 39% by rescinding the Bush tax cuts. So again, how can anyone be serious about calling for a Sputnik moment when the money isn't there, and no one really wants to provide such funding - whether for training new teachers (100,000 according to Obama, but more realistically 250,000 is what we need), as well as repairing our crumbling infrastructure.

Hell, most Americans today are more focused on the DOW crossing 12,000 than that the American Society of Civil Engineers has awarded our infrastructure condition a 'D' and estimated its repair cost (merely to being rendered serviceable) at $1.7 trillion!

But this indicates how much further we've willingly divorced from reality since those Sputnik days back in October, 1957. We place more inherent value on a number in Maul Street's Casino than on the actual fiscal sacrifice required to ensure a "Sputnik moment" becomes reality!

And how mammoth would the JFK inspired Space Race project be? Dickson again (p. 217):

"On May 25, 1961, Kennedy addressed a joint session of Congress and asked for a joint commitment to 'landing a man on the Moon and returning him to Earth', within the decade. America's biggest, costliest and most ambitious effort ever was under way, rivaled only by the building of the Panama Canal and the Manhattan Project's building of an atomic bomb to end World War Two."

Dickson goes on to note that a $20-40 billion estimate of cost was provided, with $20 billion being the final tally. Or, about $100 billion in today's dollars. The problem here is that the cost to accommodate Obama's "Sputnik moment" could easily be $2 trillion, just to repair the existing infrastructure so all our roads and bridges don't collapse, and the training of 100,000 teachers. (Some independent news assessments have been around $500 billion for the whole thing, but this lowballs the total infrastructure expense dramatically.)

If you want to factor in an alternative energy project to attain the goals Obama mentioned last night, making us virtually oil-independent by 2020 (meaning more than 50% of energy would have to come from non-oil sources) you better toss in another trillion!

But WHERE is this going to come from? Well, a trillion of it might have been available had the Bush tax cut extension not been passed last month - but that train's left the station. As it is, the Repukes want more tax cuts, and vast spending cuts on the order of $500 billion or more. In this sort of climate - and with most of the population concerned over debt, there's little leeway to launch massive new projects on a par with what we did as a nation after Sputnik.

Back to the early 1960s, the American educational system was truly transformed as for the first time up to 50% of high school students actually took a physics, as well as advanced math classes (trig and algebra II). Many of us were on a "rocket high" as we followed each rocket launch in the race to beat the Russians.

I got into the design and construction of amateur (model) rockets, which I used to launch either lizards, or roaches up to altitudes of 1500' or more. Some of those launches actually filmed by Miami TV station, WTVJ. A design and computational graphic are shown above. Most of the calculations for the design could be done in under three hours, using my trusty Mannheim style slide rule. (There were no electronic calculators back then, folks!)

That was an era where an entire generation's imagination had been captured, and teachers of math and science could enter a classroom and fully expect 100 percent attention, because all of us wanted to learn. We wanted it so we could become rocket engineers, astronauts, or anything remotely allied to space and the distant planets.

Sadly, in the diminished age of Twitter, Facebook, i-pods, i-pads and X-box game stations most of that wonder has been lost, and I doubt it can be recovered, even if the funds could be found to fuel a "Sputnik Two".

It just isn't in the cards.

But hey, nice thought, Mr. President!
Posted by Copernicus at 8:56 AM