Another Evangelical Moron -and at State level! 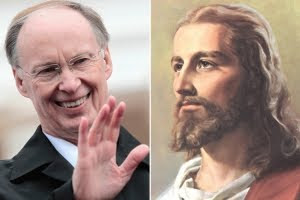 New Alabama governor Robert Bentley (left) and Yeshua. Yeshua would actually reject this creep for isolating one of his flock from the rest based on the specious "salvation" bunkum.

One would think the rednecks and backwoods descendants of those that fire-hosed and beat Martin Luther King in Selma and set their dogs on him at Birmingham, would at least have had the decency to give it a rest for his special day. But no way! They are bound and determined to use even that special day to try and lord it over the non-Evangelical or non-Christian citizens of Alabam and exercise the dubious notion that the U.S. of A. is a "Christian nation"- which I have debunked so many times that I am blue in the face!

Once more, anyone buying this codswallop, I refer them to the words of the Founders who signed the Treaty of Tripoli:

Art. 11. As the Government of the United States of America is not, in any sense, founded on the Christian religion; as it has in itself no character of enmity against the laws, religion, or tranquillity, of Mussulmen; and, as the said States never entered into any war, or act of hostility against any Mahometan nation, it is declared by the parties, that no pretext arising from religious opinions, shall ever produce an interruption of the harmony existing between the two countries.


Now, yesterday, despite this clear wording, and the fact we know Yeshua was an egalitarian Rabbi who excluded no one- except maybe Pharisees (or hypocrites) -from his embrace and friendship, we have this load of bollocks from a moron named Robert Bentley, the new Republican governor of Alabama. (Well, hell, he's a damned Repuke, so what can you expect? Probably hatched from some Tea Bagger or two)

"'I was elected as a Republican candidate. But once I became governor ... I became the governor of all the people. I intend to live up to that. I am color blind. But if you have been adopted in God's family like I have, and like you have if you're a Christian and if you're saved, and the Holy Spirit lives within you just like the Holy Spirit lives within me, then you know what that makes? It makes you and me brothers. And it makes you and me brother and sister.

Now I will have to say that, if we don't have the same daddy, we're not brothers and sisters. So anybody here today who has not accepted Jesus Christ as their savior, I'm telling you, you're not my brother and you're not my sister, and I want to be your brother."

Of course, as I've belabored it so many time before, the whole "salvation on the Lord JC" shtick is just a load of rubbish and utter horse pockey. It has no serious scriptural basis no matter how many times these demagoguing semi-literate hicks cite chapter and verse of whatever bible they have. They're all living in delusion.

The fact is, "salvationism" introduces a false and VERY un-Christian exclusionary isolation and apartheid which Yeshua himself never evinced, certainly not with the common people of his land. In one of the most in-depth historical and scholarly books ever written (The Historical Jesus: The Life of a Mediterranean Jewish Peasant) specious separatism based on fictious belief is never seen.

As Crossan documents, everything about Yeshua telegraphed that he was a "peasant Jewish Cynic". (As Crossan points out, p. 421, a 'Cynic' embodied "a life-style and mindset in opposition to the cultural heart of Mediterranean civilization, a way of looking and dressing, of eating and living and relating, that announced its contempt for honor and shame, for patronage and clientage. ....Hippies in a world of Augustan yuppies.")

In other words, a role and set of behaviors (Crossan refers to them like latter day hippies) which would absolutely tweak the disjointed noses of executive state assholes like Bentley. As Crossan notes, little wonder then that Yeshua's habits would infuriate not only Jewish orthodoxy but the Roman government. Leading ultimately to execution for what they'd have perceived as "subversion" of the Empire. (Like Bentley would doubtless depict any atheists or hippies still living in his state now, though I can't imagine anyone deliberately choosing to live in such a backwater of civilization - which ranks nearly dead last in every quality of life index from health care access to educational competence, to public services.)

Most important is Crossan's insight regarding Yeshua, that(p. 422):

"His strategy, implicitly for himself and explicitly for his followers, was the combination of free healing and common eating, a religious and economic egalitarianism that negated alike and at once the hierarchical and patronal normalcies of Jewish religion and Roman power.

And lest he himself be interpreted as simply the new broker of a new God, he moved on constantly, settling down neither at Nazareth or Capernaum. He was neither broker nor mediator but, somewhat paradoxically, the announcer that neither should exist between humanity and divinity or between humanity and itself. Miracle and parable, healing and eating wwre calculated to force individuals into unmediated physical and spiritual contact with God and unmediated physical and spiritual contact with one another. He announced, in other words, the borderless kingdom of God."

Note that common eating and healing meant he mingled with EVERYONE! He didn't set certain people aside by first getting them to pass a belief litmus test! EVERYONE was welcomed into the fold! The "borderless kingdom" meant just that - NO BORDERS, NO SEPARATIONS! No ficititious boundaries to isolate one from another.

Even Bentley's press secretary was evidently caught off guard by this ignoramus' remarks, as he scurried to clarify and try to save the day, later telling the media: "He is the governor of all the people, Christians, non-Christians alike."

Oh yeah? Then why the hell didn't HE say that? Why is it necessary for you to "clarify" after the fact which then ends up meaning nothing!

The true fact is what we have in this Repuke Alabamy guv is just another backwoods hick who thinks his shit don't stink because he got "jesus" and "salvation". He believes he's better or holier or at least not hellbond like the rest of us poor schmucks.

The tragedy of this idiot bellowing out his spirtual apartheid on Martin Luther King's day, is that it brought an even more virulent reaction from the blogosphere including many rants from Catholics - not even atheists.

A particular comment (in the 'letters' section at salon.com) went:

"Sorry, Governor Fuckface - if you're not a Catholic or a Greek Orthodox Christian, then you're not really a Christian in my book, and YOU ARE GOING TO HELL.

All you fucking Protestant scum led astray from Holy Mother Church by the Demon Martin Luther and the lusts of a fat English King are NOT MY BROTHERS.

You are fallen, debased heretics who live outside of God's true grace and YOU ARE ALL GOING TO HELL’ ‘specially Born agains for whom the hottest fires are ready.

And I'm here to cast the first fucking stone at you, protestant scum!

There is only One True Catholic and Apostolic Church, and it was founded by St. Peter, not some hillbilly named Vern, or a dumbass King named James!


Which, of course, can no more be condoned than Bentley's exclusionary pontificating, because what this Catholic is proposing is equally exclusionary! Not only does his hyper-polemic resort to the odious and reprehensible "real Christian" arrogance, but also emphasizes "Hell" for good measure and to add insult to injury. (And make no mistake, consigning anyone - even in the imagination- to "Hell", constitutes the ultimate exclusion and apartheid. It is saying one hopes that the person so vouchsafed will be in never-ending pain and isolation!)

As I said before in other blogs, ultimately to have a chance at some remote peace- just between Christians, never mind atheists, or agnostics - the whole "Hell" concept needs to be torpedoed since it is the primary basis (as evidenced in the above rant) for rejecting one's fellows. It is too much played for hate, as well as some holier than thou vindication while also piling on to those demonized as the "other". This Catholic clearly regards all Protestants as the 'other' and his harsh words bring to mind the tortures of the Inquisition and the persecution of Protestants during the Religious wars, in France and other places. (For a horrific film treatment, see 'The Devils of Loudon')

But again, since Evangelicals and Pentecostals likely have done it to him, what can you expect? This hell shit just spreads from mind to mind like a toxin. The sooner we can gut it from the human vocabulary and thought process the better off we'll all be. Indeed, the overuse of this foul meme makes me wonder what the ones who employ it would do to "gain souls" if they had to do without! My guess is that they'd be rudderless and totally lost! Without a Hell to fall back on, they know in their heart of hearts no one would pay them any mind at all. They'd be like drunken screech monkeys yammering away at the wind, and probably candidates for the funny farm. In other words, without the use of Hell they have absolutely nothing, nada, to offer anyone! After all, minus "Hell", salvation becomes meaningless (which it already is anyway, since as Biblical scholar Bart D. Erhman has observed (God's Problem), "there is nothing to be saved from.")

Better, ditching the Hell bogey would mean that jerks like Bentley would be without an excuse to deny fellowship with their own citizens- they'll have to find an excuse closer to home: say like racism?

But at least they won't be able to play the old Hell card, which really, humanity ought to have long outgrown by now! The fact that it's still held on to in order to try to gain leverage in the mind control game, shows how much of the lizard brain still governs human affairs. No wonder, if any aliens are out there - amongst some of the billions of planets of 300 trillion stars - they'd want no part of our sorry, backwards asses!
Posted by Copernicus at 11:12 AM