Horse Pockey by the Ton. When does it end? 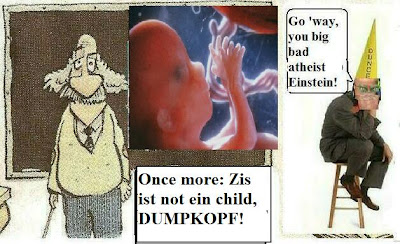 It's bad enough to deal with tee pee morons entering this blog and trying to have their insane, semi-literate and ignorant comments put up (which I emphatically will not do, as I've said many times before- unless I use them to mock or exhibit as what not to write), but now I see a certain teepee -prone pastor in Florida is also at it- putting in his two cents on the Giffords shooting.

In his case, we have this astounding high IQ remark:

"Guns DO NOT kill people - PEOPLE (via Satan) KILL PEOPLE ! "

Oh really, Einstein? Guns do not kill people? Okay, then riddle me this, maestro- if this Jared Loughner creep had only been armed with a knife - NO Glock weapon- would he have been able to get off 31 rounds and strike 18 people, killing six?

Of course guns kill people! Take away the psycho's gun, and the damage inflicted is maybe three or four wounded at most, maybe no one killed, before a bystander takes him down. The fact is that an automatic or even semiautomatic DOES make a difference in its lethal output and to deny that is to deny reality and live in la-la land. (Like the teepees do when forced to confront the words in the preamble of the Constitution to "promote the General welfare")

Now, granted any weapon in the hand of a psycho will do damage. And obviously a psycho or psychotic person will have malevolence in mind when he or she acts. But one can't willy nilly assert that the mass of damage inflicted at any one time is purely associated with that malevolent psychosis (we will leave "Satan" out as that entity has never been proven to exist) and no part connected to the TYPE of weapon used!

That's like saying the guy would or could have inflicted as many fatalities or wounded if he'd just used a knife. No WAY! Using a knife takes time! You have to get up close and personal to drive it into its destination, you can't inflict the damage from forty or so yards away! Or even forty feet! Thus, it is nonsense to assert guns don't kill people! The truth is that any gun in the hands of a malevolent or psychotic person will kill more people than that malevolent person armed with a less potent weapon.

A malevolent person armed with an UZI or AK-47 will always kill more people than one armed only with a Glock 9mm.


DUHHHH!!! How hard can this be to grasp?

Well, evidently pretty damned hard especially for a character that already demonstrated he can't tell the difference between his KJV being excoriated by the same principles he invokes to reject the Gnostic writings.

But what do you expect when he applies false balance in yet another insipid and illogical direction, asserting:

", it's just as tragic that there is not as much outrage on the MURDER of God's unborn innocent children ! "

But it's not "just as tragic" because an unborn entity or fertilized egg, is NOT an autonomous human being and certainly NOT A CHILD! A child has a level of independent being in that it is capable of living apart from the womb, and also eating by itself or moving on its own (using two leg express or toddling). I've yet to see a fetus, any fetus, just leave the womb and walk out anywhere on its own!


Thus, our primed up pastor commits the genetic fallacy!

As Antony Flew described it in his logical treatise, Thinking About Thinking:

"The Genetic Fallacy consists in arguing that the antecedents of something must be the same as their fulfillment. It would be committed by anyone who argued, presumably in the midst of the abortion debate, that a fetus - even from the moment of its conception, must be ...because it is going to BECOME...a person".


Flew goes on to note it would similarly be committed by a person who picks up an acorn and insists that it is an "oak tree". But in that circumstance we dismiss the claimant as a nutjob, or plain ignorant or worse- yet many give credence to the claim a fetus is a "child". NO! It can never be! And also it can never be a person - a state reserved for an autonomous thinking individual capable of independent action.

Thus it is an abomination and skewering of logic to claim that the six people killed in Arizona by the madman were like the entities aborted in abortions! There is NO comparison! Those six were full independent beings! They possessed autonomy and were able to move, eat and think as well as act on their own - without being tied to a maternal blood supply!

These are the very sort of egregious mental conflations that destroy the basis for reasoned discourse and also pave the way for acrimony. The reason is that again, the other side is invested in belief, as opposed to fact and reason!

Lastly, this bombastic fruitcake has the audacity to hyperbolically issue his "hell" threats again, even as Gabrielle Giffords fights for her life, as he scribbles:

"Let us pray for not only her TRUE SALVATION , but that The LORD will have mercy on her and give her a full recovery "

In other words, he's praying that the congresswoman recovers so she won't be sent to his ignorant asinine "Hell" - which he's never been able to prove in any logical sense!

What we can only do, again, is hope the REAL salvation emerges in the rebirth of brain cells of people like him and his tea party hateful cohort- who think it's cool to hate Obama and call him a 'socialist' when he's the furthest thing from it (as a footnote, a REAL socialist would never have approved or signed the tax cut extension he did. They'd never have allocated one thin dime to the richest 1%!).

In the meantime, let's continue to wish Gabby Giffords a speedy recovery and also full use of her brain function, not out of fear she'll end up in an otherwise hostile "eternal fire" sparked from the brain of a mindless buffoon - but because she's a decent person with terrific potential and is fighting on behalf of people who support her, centrist Democrat or not.
Posted by Copernicus at 3:21 PM