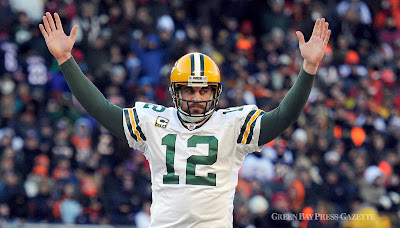 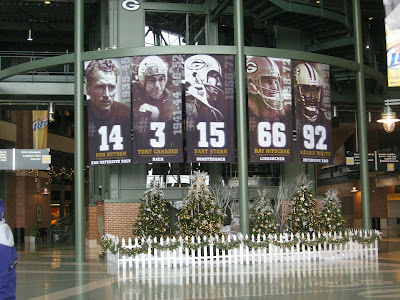 Inside the Atrium at Lambeau Field, Green Bay, Wisconsin, December, 2009, with the Packer Hall of Famers on the main display wall.
Well, my team, the Green Bay Packers, has claimed the NFC Championship after a (sometimes) nail biting victory over their arch Nemesis, the Chicago Bears. So now the Pack will be on to Dallas to play the Pittsburgh Steelers in the Super Bowl. This final step arrived after the Packers (the no. 6 seed) had to win three straight playoff games on the road.

They did it in style, beating the Philadelphia Eagles first, 21-17, then the top seed Atlanta Falcons, 48-21, and finally the Bears. The last championship match up between the Bears and Packers was on Dec. 14, 1941 or a week after Pearl Harbor. The Bears took that one, 33-14.

This win was all the sweeter coming on the heels of my visit to Green Bay last year to see the Pack play at historic Lambeau Field (see photo of the Atrium there) and beating the visiting Baltimore Ravens, 28-14.

This game opened with two quick touchdown drives that opened a 14-0 Packer lead, and for a moment looked like a blowout. Then the Bears defense stepped up and scrunched extra TD efforts using turnovers. One turnover came off a bounced ball and catch missed by Donald Driver (into the hands of Lance Briggs), and the other came off a Brian Urlacher pick of an Aaron Rodgers ball aimed at the end zone - which would have put the Pack up 21-0.

Fortunately, however, Rodgers managed to tackle Urlacher before he could rumble into the end zone for a Bears' score.

By the third quarter the Bears QB Jay Cutler had left the game with an apparent leg injury, and backup Todd Collins entered, playing an uninsipiring 15 minutes. Bears Coach Lovie Smith finally had enough with about 4 minutes left in the third quarter and brought in a rookie named Caleb Hainie who almost emulated Johnny Unitas as he damned near brought the Bears back - getting them to 21-14 and on the way to 21-21 (with a minute left in the game) when he was picked by Packers' DB Shields.

So now the Pack are off to the Big Show, their first Super Bowl appearance since 1998 when they lost to the Broncos.

Let's hope (at least I hope) they can bring the Lombardi Trophy back home to Green Bay!
Posted by Copernicus at 10:42 PM