Nihilism vs. Atheism: No way the same! 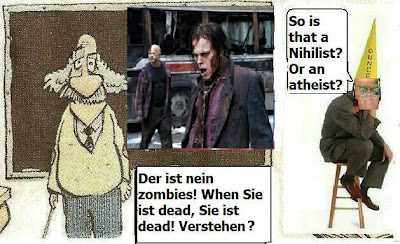 Last night’s “60 Minutes” episode first segment featured two of Jared Loughner’s close friends who mentioned how he veered into a philosophy known as “NIHILISM”. That meant he believed in nothing, and took such an extreme stance he didn’t even believe or accept the power or utility of language. Recall his question posed to Gabrielle Giffords: “If words have no meaning what it is the use of government?”

Loughner’s nihilism appears to meet the criteria of one of the primary definitions:

This is based on his denial (according to his pals) that words are any use in communicating ideas. As one of the friends quoted last night averred:

“He’d hold up a cup and say it could be anything: a shark, a barrel, a piece of grass….we don’t know what it might be…so the word ‘cup’ is meaningless”

Of course, this way insanity lies. If words or ideas are all absolutely meaningless or the meanings are purely those that we subjectively assign, then no objective universe remains. We are at the behest of the whims of unstable minds and their basic beliefs or non-beliefs, which are not supported by any evidence.

In the case of nihilism, since even the basis of communication is rejected, life truly loses its meaning (as defined by applying it oneself) because one can no longer recognize meaning without the use of words or language. If this happens, then all values lose meaning also, and that includes all moral values – which are forged by the use of language. But if words mean nothing, then language means nothing and so anything which language crafts means nothing. Given ethical and moral principles are crafted by language they also fall like ten pins.

Sadly, there are some, not being educationally competent to know the difference, who've conflated nihilism and atheism. Sure it helps them to try to link Loughner with atheism, but the logic is entirely flawed - based on two separate premises.

Unlike nihilists, atheists DO accept that words have meaning and that language conveys principles- whether philosophic, logical or scientific. Indeed, if the atheist were a nihilist of the Loughner type, he’d not be able to use or rely on logic at all! Since communication would be viewed as useless, there’d be no point even proposing a premise, far less an argument.

So we see here the nihilist’s belief in nothing is not in any way like atheism –which does believe in ONE thing: the power of science to disclose and expose physical reality and its operation. Thus, we know science works because it has been demonstrated repeatedly to do so!
For example, we know celestial mechanics works and therefore believe in it, because we’ve beheld actual spacecraft directed to other planets like Mars and Venus and landing there. If celestial mechanics was wrong, this couldn’t be. We'd never have seen the Apollo astronauts land on the Moon, far less the Viking and Mars Rover land on Mars, or the Russian Venera probes on Venus! Similarly, we know quantum mechanics works since its basic (Schrodinger) equation can exactly predict the location of the spectral lines of atoms and energy levels. We know general relativity works because it can predict the advance of Mercury’s perihelion by 43” per century. And we know that evolution works because we have amassed evidence – both genetic and from the fossil record—to disclose this. For example, evidence of common ancestry since the chimp and human cytochrome -c protein sequence are exactly the same - for which the odds are 10^93 (10 followed by 93 zeros) to one, if based on "coincidence".

Let’s use another example to show how nihilism and atheism are distinct: the religious belief in life after death.

To the nihilist of Loughner’s type it’s a non-issue since words have no meaning so nothing can be known or communicated. Hence, he doesn’t even make the basic effort to argue! Why would he if he doesn’t accept words are any use? He’d never use them!

The atheist by contrast, will take on the religionist believer here precisely because he accepts the power of words, as well as logic (even though he can’t say the same for his opponent).
For example, the afterlife believer’s whole argument rests on the fallacy of Argumentum ad Ignorantium or appeal to ignorance. The one true fact (scientifically) we know about death is that there is no evidence that it isn’t the end. NDEs don’t make the case (as we saw, last blog) but neither does citing biblical authority (which commits the additional fallacy of appeal to authority).

Thus, the logic proffered by the afterlife believer fails as an argument (in the case of appeal to ignorance) since it requires us to accept the lack of knowledge (about an afterlife) as knowledge, and the lack of evidence as evidence! One of the most notable illustrations of this nonsensical form of argument was given by Bertrand Russell. He was fond of suggesting that a teapot orbited the Sun just beyond Mars. He said that since no one could disprove his claim, therefore it must be TRUE! In like manner, clueless believers argue since no one has been able to disprove their claims that an afterlife or god exists, these claims must be true!

Following this line of specious reasoning, one would have to accept that the more evidence we lack the greater the likelihood the claim (afterlife or god) is true! This is total bollocks since it's based on the total sum of knowledge not yet acquired! Hence, total ignorance!

In addition, it commits the ‘burden of proof’ fallacy which states if one cannot prove ‘X’ (e.g. “There is an afterlife”) to be false, then ‘X’ is true. Thereby, the inability of the atheist to disprove that there is an afterlife becomes the proof of an afterlife. But this is invalid. The onus of proof as well as knowledge and evidence is on the believer, and it is HE who must provide it in the case of either his God or his afterlife. Copping out by using Argumentum ad Ignorantium or burden of proof fallacy doesn’t cut it. Nor does citing chapter and verse in a bible. (Catholics at least are less likely to commit this particular fallacy than Protestants, maybe because Catholics were forbidden to read the Bible for centuries, so didn’t develop the incredible dependent crutch displayed by many evangelical Protestants.)

Because believers haven’t delivered, the atheist is quite justified not to take their claims seriously. Emotionally feeling there "must be an afterlife" or life itself has no purpose otherwise, isn't good enough and indeed is another copout that goes by the name, "Sob story". This also includes the claim, by extension, that if life has no purpose and it ends at physical death, then BOO HOO HOO...we could as well off ourselves right now! Not so, we can act like grownups instead of bawling infants, and create our own authentic purpose!

As for the religious believer’s claim that the atheist “fears death”, hardly! Fear of death can only occur if one believes or accepts it has some supernatural import but all the collected evidence thus far shows none. Thus, death is a purely natural phenomenon that happens to every creature – whether ape, lizard, spider or human…hence has no meaning apart from this. The only one for whom death can impart fear is therefore the one who extends special significance.
The bottom line here is that the atheist doesn’t assert there’s no afterlife because he’s “afraid of death” but because the religionist hasn’t provided any significant evidence to counter that proposition! All the evidence shows that when we die, that’s it, finito! Also, by the Ockham's Razor precept (the simplest hypothesis is generally the true one), non-existence after death trumps existence after death (since the latter is more complicated by having to posit special afterlife realms and beings as well, like heaven, hell, demons, angels etc....all way too complex!)

If the religionist has ironclad EVIDENCE – not Argumentum ad Ignorantium nonsense or petulant whining and tears, then we are waiting for him to give it!

UP to now all the believers do is dodge, and dodge and dodge the issue while they plaster their insipid hell cartoons on their websites and expect us to capitulate to those! At the very least, they ought to be able to marshal some kind of argument as opposed to resorting to childish extortion tactics! But given religious IQs are plausibly much less than the IQs of skeptics (see: Skeptic Magazine, Vol. 15, No. 2, 2009), don't look for it. James Allen Cheyne notes: "Correlations between measures of intelligence and reported religious belief are remarkably consistent. Approximately 90% of all the studies ever conducted have reported that .....as intelligence (as measured by IQ) goes up, religious belief goes down."
Posted by Copernicus at 10:32 AM