Catechists v. Fundie Witnessers: Is there a difference? 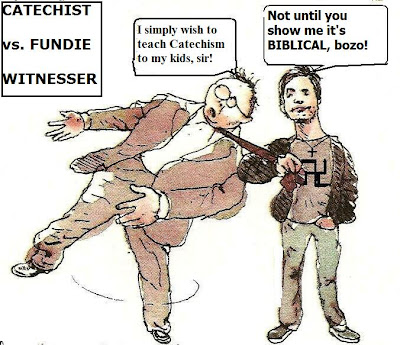 On certain fundie blogs it has come to our attention that Catholic Catechists have been singled out as some forlorn source of spreading "unscriptural" and "Satanic" messages to young people in their most vulnerable stages. Of course, these critics might say the very same about freethinkers and atheists!

What are Catechists? Well, surely not the possessed "demons" they're made out to be but rather ordinary members (laity) of the Catholic Church who feel a calling to go beyond their prosaic daily tasks and make a contribution to society. They choose to do this by integrating the precepts of their Church with social justic imperatives as well as environmental awareness and stewardship.

Having been out of the Catholic loop for years (actually decades) I thought I'd do some checking up and try to find out whether these Catechists were indeed the simple, ordinary folks of the nation out to make it better, or some kind of sinister threat with an aim to seize minds. As it turns out, they are much more the former than the latter!

On one of the sites for prospective Catechists:

One is introduced to their general aims, and principles as well as resources. Basically, their function is very simple: given the current critical shortage of religious in the Church (what with vocations falling each year) these folks who sign on as Catechists assist the Church in its traditional educational role for inculcating religious principles in the minds of the young.

It is also to be noted that these certainly aren't "demonic" by any stretch. Indeed, free files and resources available, e.g. at:

Provide a deep insight into the nature of the material taught. One such file deals with 'The Life and Dignity of the Human Person'. Certainly something any rational person would agree with. Among the basic precepts:

† The human person is central, the clearest reflection
of God among us.

† Each person possesses a basic dignity that comes
from God, not from race or gender, age or economic
status.

† The test of every institution or policy is whether it
enhances or threatens human life and human dignity.

† We believe people are more important than things.

The last two no atheist would disagree with, while he'd have 'druthers' regarding the first two, preferring to accept a human's basic worth comes from his very existence and his centrality from the acknowledgement that we are all "in this together". No man is an island, and all that!

Related to the above are the Rights and Responsibilities:

† All people have a right to participate in decisions
that affect their lives.

† Corresponding to these rights are duties and
responsibilities to respect the rights of others in
the wider society and to work for the common good.

† Any denial of these rights harms the persons and
wounds the community.

Again, none of which the atheist would dispute! (Especially the last). Most interesting and important to me are these social justice imperatives:


† The moral test of a society is how it treats its most
vulnerable members.

† The poor have the most urgent moral claim on the
conscience of the nation.

† We are called to look at public policy decisions in
terms of how they affect the poor.

† The overarching Gospel principle is the obligation to
attend to the poor-”the least of these.”


The last refers to Christ's admonition: "Whatever thou doest to these the least of my brethren, that thou doest unto me".

Which makes me wonder why more Protestant fundies aren't out there serving the homeless at soup kitchens, than dispensing useless pseudo-scriptural nonsense about "hell" and "Satan" (both fictions) on their damnation-heavy blogs.

This brings me to the differences between Catechists and Fundamentalist witnessers. The first and most important is that the Catechist doesn't force herself on anyone or accost hapless bystanders at Malls or on sidewalks like the witnesser! She instead has a specific venue where people come to her! Thus, choice is involved.

There are also rigorous principles to which the Catechist must adhere, so any old odd thing can't be taught. The Catechist must adhere to the time-honored precepts that the Church has endorsed for the past 2,000+ years. As for being "unbiblical" this is over-exaggerated and over played. The truth is the bible alone - while useful for inspiration- can't be fully trusted to impart principles or truth because it itself isn't reliable.

For one thing, its moral authority is questionable. What we behold are the actions of a quixotic and petulant deity which no small child will comprehend. For instance, 2 Kings 2, 23:24 allows children to be slain by wild animals if they insult their elders (in this case a "prophet"). Well, good luck on that, elders! I daresay that if some young sprats were to taunt you with "Baldy!" and you set your three pitbulls loose on them, citing this Kings text, no cop or judge or jury in the world would accept it and you'd likely do time. Thus, the bible is not offering any kind of absolutist moral teaching here! It is regurgitating the bloodthirsty thoughts of the vengeful moron that wrote it - who is saddled with a deformed brain.

Then there are the more than one thousand contradictions, which are bound to screw up any kid's sense and intellect. Just consult a few of the 105 contradictions pertaining to "salvation" alone, e.g.

Will everyone get saved?


Is one who believes in God's son, but who has never repented, saved?


Is one who believes in God's son, but who has done no good deeds, saved?

YES: (See the verses for the “yes” answer above)

Given this much confusion, it makes eminent sense to leave "scriptural" references and reading out, as far as possible. Much later, when the child has matured, he or she can be slowly introduced to the New Testament - while leaving the Old Testament (which bears the vengeful Jewish God) on the shelves. (Note: Many bibles today are produced with the OT and NT separate which makes things easier)


Thus, it would be totally idiotic to turn impressionable kids loose on the bible without strict guidance and control.

A second most important difference, is that Catholic Catechists are not entitled to terrorize their charges like the wayward Witnessers of fundyism do, invoking "Hell" and "Satan" baloney. (Which again, are only used to demonize, thus being contrary to the basic precepts taught by the Catechists, especially "We are one human family and are interdependent".

Clearly, if one segment is consigned to "Hell" - if even figuratively, this cannot be so. Rather a de facto spiritual apartheid is used to segregate the human family into sheep and goats: the "saved" on one side, and the "usaved" (and supposedly 'demon-possessed') on the other!

On this score alone, the Catechist operates on a higher moral plane than her fundie witness counterpart, whose first words to a stranger in a Mall are often:

“IF YOU WERE TO DIE TONIGHT WHERE DO YOU THINK YOU WOULD BE?”

There is only ONE correct answer: you are no place. (Though the Catechist will say that one is ascended to heaven- but that is less offensive than threatening "Hell")

Your consciousness no longer exists, since your brain is dead- so there is no “YOU” anywhere to be found other than in a newly cooling corpse that will soon be rotting unless special measures are taken (in the case of burial, using special preservatives to feed into the veins, and otherwise – burning the body in cremation)

Here we detect the thrust and underlying meme of the question. Translated to the target’s sub-conscious: “Death is a terrifying experience and as soon as you die there is a supernatural part of you that will TORTURED forever and ever unless it is SAVED!”

But this is bare bollocks on a number of fronts. First, death is wholly natural. Unless old beings are removed by death, so new beings can take their place, the world will: a) become vastly over-crowded – soon ending with not enough food available for all the multiplying (undying) species, b) Since no new genes are introduced into any species, since there is no death, then species’ genomes will not change. Thus, NO evolution will occur!

Thus, death is an essential element of the natural world in controlling the numbers of species and populations that can occupy the planet at one time or one era- given limited planetary resources which need time for replenishment. Thus, death is critical in enabling the basis for further evolution of new species.

Thus, the psychological terror inheres in taking a perfectly NATURAL act, and transmogrifying it into a fearful, fretful possible transition to HELL. In this way, the natural human fear of death is metastasized and magnified out of all proportion to its actual import – leaving the person in near despair unless they are prepared to surrender control of their minds to the agenda of the “witnesser”. (Much like the sad and forlorn folks duped by the Rev. Jim Jones had to surrender their possessions as well as minds to him before they could emigrate to Jonestown, Guyana- where, of course, he promptly demanded those same zombified minds to ingest cyanide-laced kool aid on his demand.)

Truth be told, though we disagree with many of the Catechist's fairy tales on the afterlife, we fully concur with her principles - especially to do with social justice and protecting our environment!

In this sense, we have to side with the moral imperative and actions of the Catechist before the fundie witnesser, more interested in terrifying "souls" into the fold than educating them on a Christly life.
Posted by Copernicus at 10:42 AM