Is It Wise to Piss off a Romanian Witch? 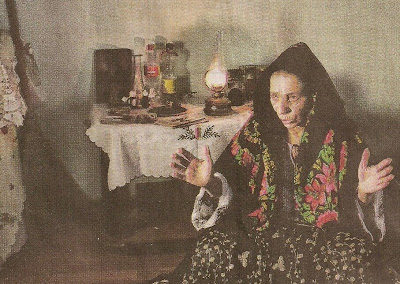 Romanian witch Bratar Buzea, in the process of preparing materials for her protest spell at having to pay 16% in income tax.

It appears that Romania's "Queen Witch" Bratar Buzea is quite outraged at the Romanian government after they announced plans to tax all witch activities, whether casting spells or simply selling a witch's brew or an amulet. Under the new law, all active witches (which is to say those who cast spells or sell items for money) will pay 16% income tax and have to make contributions to health and pension programs. Mdm. Buzea so incensed that even now she's gathering assorted mounds of cat excrement and dog carcasses to cast spells on the Romanian President and government.

"This law is foolish. What is there to tax, when we hardly earn anything? The lawmakers don't look at themselves and how much they make, their tricks. They steal and they come to us asking to put spells on their enemies"

Of course, one might be interested in asking the Queen witch if any of those spells have actually worked. Also, why she believes the current "evil spell" will actually put a hex on the Romanian government so "evil will befall them".

But what IS evil at the end of the day? In reality, we know there's no external evil personality or agency, it's basically all in one's head....or rather brain. What people refer to as “evil” is easily explainable in terms of brain evolution. Thus, Homo Sapiens is fundamentally an animal species with a host of animal/primitive instincts residing in its ancient brain or paleocortex.

Meanwhile, the paleocortex sits evolutionarily beneath the more evolved mesocortex and neocortex, the latter of which crafts concepts and language. One clever person has compared this tri-partite brain structure to a car design welding a Lamborghini to a Model T Ford chassis, with a 1957 Chevy engine to power the Lamborghini. If an automotive engineer can conceive of such a hybrid beast, I'd be interested to know exactly how he thinks it would run.

Given the preceding brain structural defect, there is much evidence that the aggregate of human behavior will get progressively worse as the complexity inherent in technological and globalized societies increases, but brain evolution is unable to keep pace with it. Basically, we are a species with the capability of making nuclear weapons and intercontinental missiles – but with Cro-Magnon brains – and a swatch of reptilian tendencies.

The behavior resulting from this hybrid brain is bound to be morally mixed, reflecting the fact that we literally have three “brains” contending for emergence in one cranium. Behavior will therefore range from the most selfless acts (not to mention creative masterpieces) to savagery, carnal lust run amuck and addictions that paralyze purpose. The mistake of the religionist is to associate the first mode of behavior with being “human” and not the latter. In effect, disowning most of the possible behaviors of which humans are capable- and hence nine tenths of what makes us what we are. Worse, not only disowning these behaviors – but ascribing them to some antagonistic dark or negative force (“Satan”) thereby making them into a religious abstraction.

The Devil” or “Satan” is simply the projection of the most primitive brain imperatives onto the external world. And yes, this imperative (which I will soon get to in more detail) is capable of mass murder as well as genocides. A supernatural Satan need not be invoked here, only the ancient brain residue of reptiles (based in the reticular formation) aided and abetted by a newly perverted neocortex, which now does the reptile brain’s bidding, as opposed to attempting to halt it.


But is there any feasibility at all to the Romanian witches' threat- say at a physical level? The only conceivable one emerges from the basis of quantum physics, but it's a long shot! It is based on the well-known Bell Theorem that allows an entanglement or nonlocality to operate - that is, the possibility of an effect being transferred over vast distances without any evident direct causal mediating agent. See, e.g.


Based on these, any success that might be afforded the witches would emanate from their collective ability to generate a sufficiently large quantum potential, defined according to:

Thus, V_Q has units of energy as the other potential energy functions in physics, e.g. gravitational and electrostatic. On average, the greater the number of possible states, the greater the difference (f' - f) (for brain originated wave frequencies) and the greater the quantum potential.

Of course, in a real human brain, we have a "many-particle" field (especially since we're looking at neuronal complexes) so that the quantum potential must be taken over a sum such that:

Thus, theoretically there is the possibility that Mdm. Buzea's hexes might work but one must also consider that an input into this collective particle aggregate also comes from witches that don't agree with her. According to one, Mihaela Minca: "This law is very good. It means that our magic gifts are recognized and I can open my own practice".

So, enough of those that think this way, will neutralize the magnitude of the negative quantum potential generated by Bruzea and her lot.

Perhaps more worrisome on the level of "evil" than any spell, is the fact that dozens of Mdm. Buzea's allies will hurl poisonous Mandrake plants into the Danube. If anyone then swims or drinks this polluted water, there will be nasty effects - but they won't come from spells, or hexes!
Posted by Copernicus at 9:46 AM