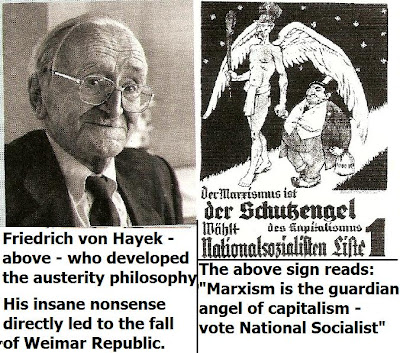 Kudos and commendations must be extended to President Barack Obama for his decision not to play the austerity card in tonight's State of the Union message. According to reports this morning out of The Washington Post: "President Barack Obama has decided not to endorse his deficit commission's recommendations to raise the retirement age and otherwise reduce Social Security benefits in tonight's State of the Union address, cheering liberals and drawing a stark line between the White House and key Republicans in Congress".

Make no mistake this is a wise decision, because frankly, Mr. Obama's re-election hinges on getting his base aboard for 2012, as opposed to their massive abandonment in last year's mid-terms. (Which was the major reason for the Dems losing so many House seats, not a Repug "tidal wave"!)

But bullshit often passes muster especially in this country, where even college grads are found to lack basic critical thinking skills because of diminishing time investment in their studies- see: http://www.econ.ucsb.edu/~babcock/College_time_use_NBER.pdf.

As for those Republicans who are on the other side, it pains me to say that none is more prominent right now than Rep. Paul Ryan of Wisconsin. (A state that had featured for most of the early 20th century Socialist mayors, e.g. in Milwaukee - such as Frank Zeidler). Quoted in a recent Financial Times piece ('Pay down Problems', Jan. 14, p. 7), Ryan avers, in respect of the country refusing to tackle its "mounting debt":

Well, not quite! Especially since American college and high school age kids are more wedded to their Facebook and Twitter than exhibiting any kind of remote activism or political consciousness!

But anyway, the point is there is likely to be lots of hostility and probably instability, including protests that will might make the tea Party anti-Obama Health reform ones look like.....well, tea parties!

But maybe fewer benefits and more need for 'nose to the grindstone' is exactly what the Washington-Wall Street axis wants! A clue can be found in an Economist piece ('A Boomer's Wrinkle', Jan. 1, p. 25) wherein it was observed:

"Andrea Campbell of M.I.T. believes it was the creation of Social Security in the 1930s and Medicare in the 1960s that transformed the elderly into the most politically-engaged group in America. Ever more comfortable in retirement, they had the time and the means to follow politics ....."

Which gets to the heart of the matter, because truly following politics is not easy or straightfoward, especially in a nation that has a corporate-owned media which often substitutes PR dreck for actual facts and news. Hence, unlike in many other nations, one must spend an inordinate amount of time trying to find out what's really going on, as opposed to what we're merely told is going on.

Add in to this mix Americans' traditional historical amnesia and you have a potent brew designed to keep people ill-informed or half-informed, particularly on issues that most concern them.

Not to put too fine a point on it, but had most of us lacked the time back in 2005 to ascertain what privatizing Social Security would really mean, we might not have done the spade work that provided the fuel to overturn Dumbya's efforts! The sad aspect here is that most Americans do lack the time to follow politics, which also explains why most are ignorant of critical issues and hew to a "moderate" (read: know little or nothing) path. It is exactly for this reason so many moderates base votes on vapid personality issues like whether Mr. X is "someone you can have a beer with". (To which Bill Maher once responded on seeing a poll weighted that way: "Hey, dummies! We're not taking the prez to a bar!")

Meanwhile, those of us who survive via political consciousness (or what we call "deep politics") want to know how he plans to protect our entitlements, or if he's inclined to immerse us in costly, undeclared wars and occupations.

Clearly then, it serves the stealth interests of the elitist, Neoliberal capitalist Overclass to ram austerity down the throats of the people to divest them of ever more benefits and support, to thereby render their existence marginal unless they're working 24/7. If so working, then they can't meddle in or track political issues or events, and hence become ever more the expendable serfs of the same Overclass. So dumb and ignorant (ultimately) they can't even parse when their own welfare is being gutted and extirpated. Not surprisingly the loudest calls are coming from the richest turds around, such as billionarie Peter G. Peterson and his cohort, as well as useful idiots like Ernest Bowles (himself an investment banker) and Alan B. Simpson.

Now, back to the issue! The real hobgoblin that Paul Ryan needs to worry about is forcing austerity measures down the throats of middle or working class folks while he intends to lessen the tax burden on the wealthy. This is almost a surefire way to initiate or instigate social instability leading to ...who knows what? But the Weimar Republic in Germany before Hitler seized control can serve as an object lesson.

A key insight is derived by examining the events following March 30, 1930 and concerning then Chancellor Heinrich Brüning. This is based on a recounting in Ian Kershaw's excellent monograph, Hitler Hubris(1889-1936), which documents the history leading up to 1936 and Hitler's seizure of power-consolidation of the Nazi state.

First some background. Brüning was an austerity maven and learned this fell philosophy as a doctoral student at The London School of Economics - where it was promoted by "free-market Austrian school" whores like Friedrich von Hayek (one of the heroes of the modern Libertarian Right, and their Ayn Randian nattering nabobs). As Kershaw notes (p. 324):

"By June (1930), Brüning was running into serious difficulties in his attempts to reduce public spending through emergency decrees"

Note here that under existing German laws for the Weimar Republic, if no majority could be achieved for financial reform in the Reichstag (which was the case, ca. March, 1930), the Chancellor had the option of issuing an "emergency decree" and attempting to obtain a majority for that. If such presidential decrees even failed to gain a majority, then - under Article 48 - the President could dissolve the Reichstag (which necessitated new elections within 60 days)

Unfortunately for Brüning, on July 16, 1930 his financial reform bill aimed at a (deflationary) policy of massive public spending cuts was rejected by the Reichstag. He then resorted to an emergency decree to make the bill law, but when this was rejected by a majority- so he resorted to dissolution of Parliament by July 18, 1930.

The dissolution provided the opening gambit for Hitler and his brown shirts, who beat up socialist and workers, trade union members to the delight of big Business. Hitler totally exploited the weaknesses of the Weimar system, calling down his wrath on its failed promises of tax reduction, flawed financial management and failure to trim unemployment. In vague terms, and with the massive austerity still threatening terrified Germans, Hitler promised security - financial and personal- with the central idea of "national liberation through stength and unity"

The result of the election was a resounding success for Hitler and the Nazis with nearly two-fifths of all votes coming from the German middle classes (Kershaw, p. 334). The major paper, The Frankfurter Zeitung, called it the "bitterness election" and cast the middle classes as villains for being motivated by the desire to "overturn the current political system."

Not long after, Weimar austerity did strike as the World War I allies called in their war debts and credits and Brüning got the Reichstag to go along with huge spending cuts . After just two years of “austerity” measures, Germany’s economy had completely collapsed: unemployment doubled from 15 percent in 1930 to 30 percent in 1932, protests spread, and Brüning was finally forced out. After just two years of austerity, Germans were willing to be ruled by anyone or anything except for the kinds of democratic politicians that administered their “austerity” pain. In Germany's 1932 elections, the Nazis and the Communists came out on top — and by early 1933, with Hitler solely in charge, Germany’s fledgling democracy was shut down for good.

In the wake of this,von Hayek and fellow Austrian aristocrats were forced to flee from the fruits of their economic programs, then did a complete revision of history. Once safely ensconced in England and America, funded by oligarch grants, von Mises and von Hayek pushed a revisionist history of the collapse of Weimar Germany. Rather than blaming their deflationary austerity measures, they tagged big-spending liberals who were allegedly in charge of Germany’s last government.

The Nazi Propaganda Minister Josef Goebbels, not willing to let a good piece of bullshit go to waste, incorporated this into propaganda posters for the elections of 1932 and 1933, incredibly depicting Marxism (conflated with liberals) as being the "guardian angels of capitalists"! (This, at the exact same time big business was applauding the Nazi SA street thugs thumping and killing Marxists, communists and any ordinary workers demanding more assistance!)

Today much of the same sort of horse manure comes to us compliments of shills like Paul Ryan, who insist it is the big public spending that is ruining our finances - as opposed to unwinnable, undeclared wars and occupations, and over ten years of massive tax giveaways to the rich. but bear in mind, Ryan is a stooge of von Hayek just like most of the free market worshipping Repukes.

Meanwhile, the clarion calls for cutting public spending continue to sound (e.g. 'Indebted America Risks an Age of Austerity', Financial Times, Jan. 24), and from investment bankers like Ethan Harris of Merril Luynch and the Bank of America, who writes (FT, 'Paydown Problems')

Indeed, we're playing a "dangerous game" - but that is precisely the Hayekian stupidity of further gutting public support and benefits for a financially-strained middle and working class already on the ropes. As opposed to going for the money where it already is, concentrated in the hands of the über-rich.

Venezuela’s austerity programs created greater poverty, richer oligarchs, worse corruption, and the inevitable backlash in the form of Hugo Chavez, who staged a coup in 1992 that almost succeeded and later won the presidency through the ballot box. Austerity programs in the ex-communist Soviet countries led to similar disastrous results. And last year's Sovereign debt austerity saw fire bombing all over Greece, and then later mass riots and burning autos in London (when the Brit PM introduced his austerity measures).

Don't we ever learn? Must we continue to worship discredited fruitcakes like von Hayek and von Mises and their Tea Party fawning idiots over and over? Is the example of the fall of the Weimar Republic not enough to remind us that this Republic may also be at risk?

Those who sincerely believe von Hayek-style austerity is the way to go, would be well advised to process Baltimore Sun columnist Jay Bookman's words below, which appeared in a 1999 piece (''The New World Disorder Evident Here, Abroad'):

"The global economy has been constructed on the premise that government guarantees of security and protection must be avoided at all costs, because they discourage personal initiative. In times of crisis, however, that premise cannot be sustained politically. In times of trouble it is human nature to seek security and protection and to be drawn toward those who promise to provide it. That is how men such as Adolf Hitler, and Vladimir Ilyich Lenin came to power, with disastrous consequences"


At least President Obama has appeared to sense the risk of public spending cuts for now, and we duly applaud his good sense for that!
Posted by Copernicus at 1:12 PM