Obama Must Not Yield to the Repuke Budget Terrorists! 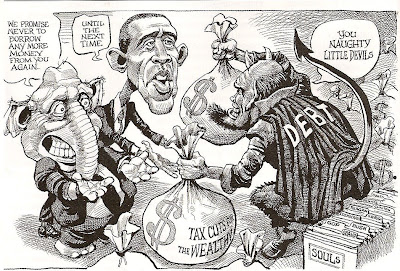 As dozens of Repuke-reptile Tea Baggers enter Washington, D.C. to take their places in a remade House of Representatives, they've made their mission abundantly clear: 1) to shoot down "Obamacare" in any way they can, and 2) to refuse to raise the government's debt ceiling which now stands at $14.3 trillion, unless massive domestic spending cuts are made on the order of $100 billion.

Apart from the fact the Tea baggers' own GOP party has lost all credibility on this (awarding $140 billion in UNPAID for tax cuts to the wealthiest 2% for the next two years, and holding governance to ransom for it to get passed) they have no rational leg to stand on. To demand $100 billion in spending cuts, therefore, when you've already tendered over $140 billion in deficit increases is the epitome of cynical hubris and insanity.

Worse, to refuse to increase the debt ceiling (which now lies parlously above actual expenditures - by barely $400 billion) the Teepees invite total government shut down, and loss of bond rating quality for the nation (the 'full faith and credit of the U.S. government') which will likely see the U.S. bond rating changed from AAA to BBB, by Moody's, Standard and Poor's and other rating agencies.

Many observers in the financial world have noted that the catastrophe that ensues would make the 2008 credit crisis look like a game of tiddly winks. Indeed, think about this: the credit crisis - arising from credit default swaps(CDS) literally brought all bank lending to a screeching halt because no bank around knew how much liability (in CDS holdings) any other retained. Given many of those CDS are still on the books, a downgraded national bond rating on top of this would have an even worse effect, compounding the existing liabilities with a definite low national bond rating - making international exchanges or borrowing nearly impossible. Even common bank transfers would be problematical.

Meanwhile, with no money by which to conduct its business, the government would have to stop all activity. The Social Security Administration would stop sending out checks, even as the Veterans Administration (VA) would cease sending out veterans' benefits or disabilities checks, and Medicare would cease paying physicians for care. Unemployment insurance benefits, of course, would also be a casualty even though approved in the tax cut extension bill passed last month. But with no money to actually deliver what the bill promises, it ends up totally hollow.

According to Austan Goolsbee, of the White House Council of Economic Advisors, a refusal to raise the debt ceiling would essentially push the country into defaulting on its financial obligations for the first time in history.

Think of the debt ceiling somewhat in an analogous fashion to a credit card limit. Say your limit is $15,000, then that means theoretically you can charge on your card up to that limit - but if you exceed it, there's a serious penalty (often your card is withdrawn). In the same way, the "debt ceiling" represents the national "credit" limit. If it isn't increased, then outside bankers and bond markets will not permit valid lending beyond the existing limit, to enable the spending that keeps government going.

People may think that a $400 billion "margin" between current spending and the existing debt limit of $14.3 trillion is quite a lot of breathing space, but they're seriously mistaken. One month's Social Security, Medicare and VA payments would easily suck up half of that. Now, factor in all the other agencies that need money to keep running - from the CDC (Centers for Disease Control), to the Post Office and EPA, to the FDA (which oversees protection of your food and drugs) to the Justice Dept. (FBI etc.) as well as CIA, NSA etc. and the money's used up before we even get to approving another $75 billion for Afghanistan operations.

Hence, we are talking serious shit here, make no mistake. According to Goolsbee (speaking on ABC's 'This Week' on Sunday):

"The impact on the economy would be catastrophic. It would be a worse financial crisis than anything we saw in 2008. I don't see why anyone's talking about playing 'chicken' with the debt ceiling".

But as we know, the ideologically -driven tee pees promised their supporters they'd cut spending by any means necessary. Thus, the leveraging of the debt ceiling comes into play. As they see it, refusing to raise the limit on the federal debt would be an effective tactic to force lawmakers into cutting spending and facing such contentious issues as the rising costs of Social Security, Medicare, and other programs.

Even non-tee pee Repuke, Sen. Lindsey Graham (SC) has gone along with this budget-terrorist thinking according to a recent (Jan. 3) Associated Press release, asserting that he would not vote on raising the debt ceiling unless there was a plan in place for "dealing with long term obligations, including for Social Security and returning to 2008 spending levels."

Maybe Graham and his Repuke allies ought to have thought of 'returning to 2008' spending levels before approving over $650 billion in tax cuts - without which we would have had 2008 levels! But they don't seem to understand that if you raise the federal debt by over 7.8% (by holding all government business to ransom) you can't then demand federal debt be cut by holding it to even more ransom.

On this score, as Bill Clinton did in 1994, President Obama cannot blink or back down! He cannot again allow these budget terrorists to get their way - and cede them the spending cuts they want (which would likely be mostly in education, and transportation) for the price of the government's continued business. As with Clinton, if 'chicken' is the game the Rs want to play, then so also he must play.

If they want to drive their 'rod to the edge of the road, where it meets the 400' chasm, so must he! He cannot back down, because this time he will likely lose his base permanently. Let the REPUKES bring the nation to financial perdition, then let THEM pay the horrendous costs for their folly when people - including veterans and the elderly- see they're not receiving their benefits because of grandstanding by 40-odd kooks and their nutty enablers.

The political solution here is what we may call 'financial Armageddon' - but the Repukes must be taught that "bipartisanship" does NOT mean "date rape" as one Republican mouthpiece (Grover Norquist) once put it. If it means bringing the nation to default, so be it. But the alernative:Obama allowing himself to appear as the Repukes' "bitch" - is too unthinkable (including for future R-ransoms, hostage -taking) to contemplate! Hopefully, having re-charged during his Hawaiian holiday, Obama is re-energized and viscerally fortified himself and is "loaded for bear" to confront the Reeps - if that is what they want. NO MORE giving in to them, on THEIR TERMS!
Posted by Copernicus at 8:27 AM