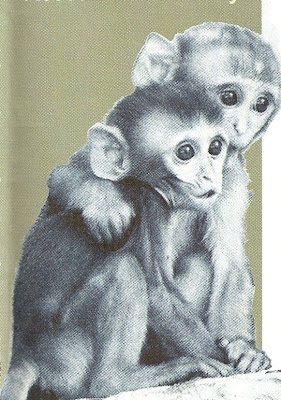 An older rhesus monkey protects a younger one from a perceived threat. This shows that a sense of right and wrong is not confined to humans (Compliments of the Wisconsin Primate Center).

We continue now with exploding the ten common myths:

6. Only an Intelligent Designer could have made something as complex as the eye

Richard Dawkins originally shot this specious reasoning down when he observed:

At the very minimum, advocates of such a complex intelligent designer should at least have provided the necessary and sufficient conditions by which its design operates, but they haven't even done that.

Secondly, the anatomy of the eye certainly doesn't bespeak the existence of any kind of intelligent designer, but rather more the outcome from an algorithmic process. For example, it's built upside down and backwards- with photons of light having to actually travel through the cornea, lens, acqueous fluid, blood vessels, ganglion and amacrine cells, horizontal and bipolar cells, before reaching the light sensitive rods and cones that convert the light into neural impulses. (Which are then sent to the visual cortex at the rear of the brain for processing into meaningful patterns).

For optimal vision, why would an intelligent designer have built an eye upside down and backwards? Further, why on earth create it with a blind spot?

Far from a "designer", the human eye betrays the pathways and structures that naturally would result from an evolutionary dynamic based on natural selection!

7. Evolution's only a theory and we know theories aren't real

This myth is based on a false idea of what a theory is, actually confusing it with conjecture or speculation. In fact, a theory is the most advanced articulation of the scientific process: it represents the phase at which a hypothesis has actually been found to meet its predictive tests, and been confirmed. Thus, all branches of science are based on theories. For example, in physics we have the modern quantum theory (which explains the origin of the spectral lines in atoms, as well as their energy levels) and the theory of general relativity - which accounts for the action of gravitational fields near massive objects.

A theory is considered robust and reliable if it consistently predicts new phenomena that are subsequently observed. Facts then, are the world's data, and the theory of evolution is replete with them, including: the fact that humans and chimps display the same cytochrome-c protein sequence, and the fact that the 2p and 2q chromosomes in apes have undergone telomeric fusion to become the single '2' chromosome in humans. Thus, theories represent explanatory ideas about such facts we behold.

Speculations, meanwhile, are nontestable statements that are not strictly part of science. The "intelligent designer" is such a speculation until such time the ID backers can come up with not only an explanation for its nature (especially the necessary and sufficient conditions) but also describe specific tests by which we may confirm its existence.

Unlike the speculation of the ID, the theory of evolution meets all the criteria of good science, including:

- guided by natural laws and principles

- it is explanatory by reference to natural laws and principles

- it is testable by way of using those laws and principles - against the actual patterns, constraints of the eempirical world

- it is not only testable but falsifiable

By contrast, no ID proponent has informed us how to falsify the intelligent design notion.


8. Evidence for human evolution recovered so far has all been fake.

This is invoked often because most creationists are eager to discredit evolution and to do so they characteristically ignore hominid fossil discoveries while they cherry pick examples of hoaxes (like Piltdown Man) and mistakes in science - under the belief that such show weakness. But infact, they disclose the STRENGTH of the scientific process in being able to expose frauds, hoaxes, and errors. This is done via a rigorous publication system in which all research is not only subject to initial peer review, but further inspection by those in the field (by having the work published in journals)

Given the journal publication process, and inevitable exposure to many experts, hoaxes such as Piltdown Man and errors like Nebraska Man, Calaveras Man and Hesperopithecus, are soon expunged and corrected in time. Note too, it was never creationists who published their results (in peer-reviewed journals) and brought these to light, but scientists working in the field. Creationists and ID'ers mainly just read about the already published work of others, and parasitize it for problems, errors and whatnot - but they never initiate the original process on their own.

This myth commits at least two fundamental errors:a) The error which assumes that evolution means more primitive organisms develop into more complex or organized ones, and, b) The error that the second law (because it refers to increasing disorder or "entropy") applies to all living things- hence it is impossible they can "evolve" to more orderly, organized forms.

Consider (a) first: At no point and no place do evolutionists claim that more organized forms are the inevitable manifestation of natural selection and adaptation, and represent evolutionary success.What evolution states,which any high school biology student learns, is that the species which survive best are the most well adapted to their environment.

Thus, the humble cockroach beats just about all other species on Earth for evolutionary success given it's been around for 150 million years. Humans, though much more complex and organized than cockroaches, have only been around in their modern form for barely 1.5 million years, if that. Humans, up to now, have barely 1/100 th the evolutionary success of the cockroach, measured in time!

The last part is very crucial but it is exactly the part that the creationist-ID crowd omits, which renders their question a non-starter. The reason is that neither the Earth nor its biological systems are "closed" systems, hence do not exhibit constantly increasing disorder. The Earth, for example, receives a constant input of radiant energy from the Sun - quantified as some 1360 joules per square meter per second. Plants on the Earth are likewise OPEN to solar energy, and receive it and then use it in the process of photo-synthesis.

Since Earth is an open-dissipative system then at any given time for any subsystem, entropy may decrease and order increase, thus life may evolve without violating any natural laws.

Bottom line: so long as the Sun is radiating its energy, life can continue thriving and evolving. (Thus, more highly organized organisms such as humans have had the capacity to emerge, by dint of this input energy which they've been able to consume and retain - if only briefly).

In fact, the most recent research into primates shows that morality of a sort isn't peculiar to humans - as one find self-sacrifice and sharing behavior in monkeys, as well as in dolphins, gorillas, whales, and elephants.

As a social primate species, humans also evolved a deeep sense of right and wrong, probably emerging during the transition from the hunter-gatherer culture of the Stone Age to the Agricultural milieu. Because humans in the latter framework depended on reciprocity and cooperation to get crops harvested and that meant sharing the bounty for all. This stability for the purpose of shared work also required strict moral codes to preserve the cohesion of the group and its survival. Thus, certain behaviors such as selfish hoarding, rape, theft, or wanton aggression were unacceptable. Current evidence suggests human morality was in place on this basis long before the first religions apeared.

Thus it was that evolution created the social and moral sensibilities and emotions that inform us that lying, adultery, murder and stealing are wrong because they destroy the the trust in human relationships contingent on truth-telling. No "Ten commandments" was needed.

Nor would it be possible for a social primate species to survive without some inborn, evolved moral sense. Without that moral sense, for example, no outrage would be expressed at the rape and torture of others, and because of this incapacity, the unique cohesion and order binding human societies would soon be destroyed. Our recognition of the pain and suffering of others is a direct outgrowth of these evolved moral emotions, not an invented "god".

Thus, contrary to religous fabrications, it is the evolved moral and ethical sensibility which enables us to empathize with the suffering of our fellows while also recognizing that such suffering inflicted by peer aggression is wrong. We need no god to tell us this, and what religions have done is merely to appropriate the natural moral sense and smother it with hundreds of religious platitude and rules. Thus, on the evolutionary constitution of a moral human nature is built the stable constitution of human societies. Those which tend to forget that, or allow temporary tendencies such as greed blind them, will pay the price by not surviving.
Posted by Copernicus at 4:15 PM