NO! To the Hell-Benders Desecrating Funerals of the Fallen! 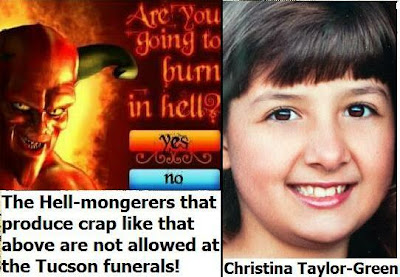 It is tragic that we can't contain and keep out the Christianoid Hell-benders and purveyors all over the web: pasting up their hateful screeds against all those they deign "hell-bound". However, at least Arizona has taken a major step to keep one group of real world Hell mongers away from the funerals of the victims of the Tucson mass -slaying. Especially for Christina Taylor Green's tomorrow.

This little girl, a devout Catholic, doesn't deserve to have her funeral desecrated by crazies who really ought to be locked in rubber rooms, and outfitted with straight jackets, while they're delivered ECT and thorazine every hour on the hour. ANY one who seriously believes in "Satan", "demons" and "Hell" merits the same. I am talking of course about Fred Phelps and the fruitcakes from his insane church who had planned to stage protests at the funerals, starting with Christina's.

Members of Phelps’ controversial Westboro Baptist Church picket military funerals to draw attention to the church’s anti-homosexual views. They hold up terrorist signs with burning fires (similar to a certain Florida Pastor's) warning the family of the deceased they are going to "Hell", believing that anyone serving a country that doesn't outright condemn homosexuals deserves condemnation themselves. Members last month picketed the funeral of Elizabeth Edwards, wife of former presidential candidate John Edwards, and had planned to protest at the Tucson victims' memorials and funerals.

However, Gov. Jan Brewer has done one thing right and scuttled their ambitions with an emergency law. Brewer on Tuesday signed a bill to create a “funeral protection zone” to keep Phelps' protesters from disrupting the funerals of those killed in the mass shooting near Tucson.

The bill embodied a bipartisan show of support for the victims, and it passed both chambers of the Arizona Legislature on a unanimous vote earlier in the day. State Senate Bill 1101 creates a “funeral protection zone” that bans protesters within 300 feet of a funeral service. The ban applies to one hour before, during or after a funeral service. A violation is a Class 1 misdemeanor.

The bill has an emergency clause, which required a three-fourths vote of the Legislature but allows the law to go into effect immediately. Brewer also said that last year, she instructed the state Attorney General to join 46 other states in a brief at the U.S. Supreme Court filed in support of the right of grieving families to seek a civil remedy against those that choose to protest and disrupt the funerals of their loved ones with hateful, Hell-mongering.

“Such despicable acts of emotional terrorism will not be tolerated in the State of Arizona,” her statement said.

The Rev. Fred Phelps of Westboro Baptist Church in Kansas responded to the shooting by posting a video on the YouTube website, saying, “Thank God for the violent shooter.”

This discloses that Phelps needs as much mental treatment as does the one he praises for his foul deed. If nothing else, Phelps needs to be brought up on hate speech charges.

“Anybody has a right to say what they want to say in this country” Adams, R-Mesa, said after the bill passed the House on a 58-0 vote. “But we have a right to regulate the time and place (of such speech).”


There is also a precedent for the law. The bill is patterned after an Ohio law that establishes a 300-foot protection zone around a funeral location from one hour before the event until one hour after it. The Ohio law was recently upheld by the Sixth U.S. Court of Appeals, which made Arizona lawmakers confident their proposal is constitutional.

To ensure further security that these crazed Hell-benders don't crash the funerals, the Republican and Democratic parties in Pima County, AZ are urging people to help form a human barricade along the funeral routes to protect the victims’ families from Phelps and his small band of vocal protesters. Such a barricade would be similar to those recently formed at military funerals to keep Phelps' whackos on the outs.

Nine-year old Christina Taylor Green met her untimely end after a neighbor invited her to go along to the "Congress on Your Corner" event - featuring Gabby Giffords- at a Safeway supermarket because he thought the newly elected student council member and aspiring politician would enjoy it.

"The next thing you know, this happened," said her uncle Greg Segalini. "How do you prepare for something like this? My little niece got killed -- took one on the chest and she is dead."

And, of course, the same all-powerful deity of the believers stood by and did nothing: not even allowing the bullet to whiz by and miss the child with so much potential. An infinite being incapable of even the most minor, accidental sort of involvement- yet we're expected to believe It can step in anytime it chooses, even to part a Red Sea or allow walking on water or whatever. Yet it couldn't or wouldn't step in to assist a small child.

Then these insane morons also want to tell us there's a Hell, that this deity of theirs made for those of us who doubt its existence.

Tragically, the events in Tucson merely reinforce once more that no one is minding the cosmic store. We are all on our own, inhabiting a universe of no purpose and no grand protectors. The only meaning that can be imparted, is that which we create or allocate. And if we truly honored these Tucson victims - as Congress purported to do today with its seven minute posturing - it would pass gun regulation laws outlawing semi-automatics so the next little girl of Christina's age is not shot down and killed.

But will they? Hardly! They will pray and pray and say more useless prayers - but pass one USEFUL piece of legislation within the limits of human consciousness and competence? Well, they'd more likely wait for their God to come down and do it for them! All Obama indeed plans to do in Tucson today is call for "unity". But unity without concerted action is meaningless, and if the speech merely punts and avoids naming those responsible - at least in creating the hateful rhetoric - he could as well have stayed in D.C.
Posted by Copernicus at 1:25 PM