The Chaos In The House: A Prelude For What's Coming If "Freedom Caucus"' Gains GOP House Control

Representative Kevin McCarthy of California offered fresh concessions to a hard-right band of rebels in a desperate effort to lock down the votes to become speaker, as a historic Republican deadlock that has paralyzed Congress entered its third day on Thursday with no resolution.

After losing a half-dozen consecutive votes for the post over two humiliating days, Mr. McCarthy privately agreed to more demands from the right-wing rebels that he had previously refused to countenance, including allowing a single lawmaker to force a snap vote at any time to oust him from the speakership,

"If this is the chaos that ensues just to choose a Republican Speaker, what hope is there of a functioning legislature even if a Speaker is eventually chosen ."  - The Republicans Descent Into Dysfunction', The Financial Times

"What you are seeing is a version of the January 6th insurrection brought indoors.  You are seeing supporters of overturning the last presidential election in a generally non-violent, polite battle with each other, in which they use votes instead of bear spray."- Lawrence O'Donnell, The Last Word, MSNBC last night

"House Republicans say they want to drain the swamp and save America, but they can’t even get through Day 1 without a display of dysfunction." - 'The GOP Chaos Caucus Returns', WSJ editorial yesterday

Norm Ornstein, appearing on ALL In last night, put the best perspective on the MAGA wing of the GOP now creating chaos in the House of Representatives -  which basically has devolved to a defunct arm of government.  He compared it to the Tea Party in 2011 which nearly sent the U.S. "over the cliff" because of an attempt at default with the debt ceiling.  Then, we were saved by John Boehner who had the leverage to salvage the situation. But as Ornstein noted, neither McCarthy or anyone else in any remote position of leadership is going to be able to do that now.  Further "the Tea party looks like Milquetoasts compared to the Freedom Caucus now."

But how bad can it get?  Ornstein stated if the "never Kevin"  vote - from the cabal now called the "Taliban 20" is 20 or even 19, this standoff could go on for days or longer.  All the time the House existing merely as a defunct branch of government, basically "the Walking Dead" in Ornstein's parlance.

Is he exaggerating? No, because this deranged wing isn't seeking to build a coalition to govern, to pass specific policies. Their primary goal it to throw "sand into the gears" to block Dems and any moderate Reeps from passing any key legislation and that may include raising the debt ceiling limit.

Even FOX blowhard Sean Hannity was exasperated Monday night in the 1st round of McCarthy rejections as he addressed the GOP’s intra-party fracas, blabbering:

“It is day one of the 188th [sic, 118th] Congress, and House Republicans now are on the verge of becoming a total clown show if they’re not careful,” Hannity began. Then adding "But at least it's not a total clown show....yet."

But it will be again today, sonny. As it was yesterday.  Hannity then addressed any concerns his viewers might have, spouting this balderdash;

"Now, McCarthy has already publicly laid out his Commitment to America plan. That is exactly the America-first, MAGA agenda that so many of you I know like.”

Kevin McCarthy, for over ten years, has fantasized about becomong House Speaker. But Monday with it seemingly in his grasp (after he moved all his junk into the Speaker's office) a Red state MAGA revolt upended his cherished desires.  This even after promising the GOOP Visigoths everything they asked for - including investigations of the January 6th committee and even blocking its documents from the National Archives.  No, folks you can't make this shit storm up. It's real and as appalling as it sounds.  These are the clowns that managed to somehow flip the House away from the adults (Dems) to a squabbling band of dyspeptic toddlers.

Worse, as MSNBC host Lawrence O'Donnell aptly compared it to the January 6th insurrection taken indoors. (See quote at top). Is he being hyperbolic? Not at all. Both the January 6th insurrection and the current Speakership fight show that a large segment of Reeps - voters as well as elected officials - are incited to tear down long-standing norms and restraints.  All that in pursuit of goals that cannot be achieved democratically, and in various forums (e.g. WSJ op-ed comments) they make it clear that they are opposed to normal governance.

The revolt on Wednesday was worse with two more rounds of no votes which saw poor little Kevin almost sobbing, spouting F-bombs, so desperate to capture the speakership.   But don't look for resolution.  The Red state "freedom caucus" rabble are determined to raise havoc. No matter the concessions made to those on the far right and McCarthy has made plenty of them.  Even if he succeeds after "130 rounds of votes",  his hold will be tenuous, fragile. Because only rejection by five members will be enough to topple him from his perch.

These 'Freedom Caucus' mutts meanwhile consider themselves Uber MAGA conservatives who are destined to deep six or blow up the "Deep State" come hell or high water.  Such runaway renegades cannot be placated even if all their demands are met because as David Jolly noted last night (ALL In) they are not interested in governance but chaos and vengeance on Biden and Dems.  Their agenda is mostly to defund, disrupt and dismantle government, not to participate in it.

Oh and they are intent on investigations and bogus impeachments. But fortunately, as Amanda Marcotte has noted, the Biden administration saw this clown show coming and was ready for it. As she writes (see more at link below):

On Thursday, White House lawyer Richard Sauber metaphorically crumpled up Republican requests for materials on various fake scandals, telling them they don't have the authority yet and will have to redo all the paperwork in the new year.

"Should the Committee issue similar or other requests in the 118th Congress, we will review and respond to them in good faith, consistent with the needs and obligations of both branches," he wrote. "We expect the new Congress will undertake its oversight responsibilities in the same spirit of good faith."

One can smell the sarcasm dripping off the letter, of course. Even a cursory review of the requests shows that "good faith" is not a concept that holds much meaning for House Republicans.

So Jim Jordan and his Reepo Witch hunters will have one hell of a time trying to move on with their assorted vengeance and grievance tour.  Meanwhile, these asswipe idiots can't even find common cause to elect their own House Speaker, so how the hell are they going to find the to move on to their bogus investigations - or even get docs from the Biden administration?

The main worry, however, is no matter how corrupt, traitorous and inept this bunch are, they can still wreak havoc on the nation if they choose to default on U.S. debt by not raising the debt ceiling, e.g.

Which malfeasance could well lead to a catastrophe of global proportions.  This is why, as Amanda Marcotte writes in Salon.com, the media must get its act together and treat the GOP House as what it is: a Trump Cult bent on revenge and characterized by governing nihilism.  This MAGA tribe, should it gain control of the House, will essentially precipitate the decapitation of one entire branch of government.  What you are witnessing now with the Speaker election chaos is just a taste of what lies ahead.

On balance, let's be thankful that at least the $1.7 trillion Omnibus bill was passed last month, given sane people in both parties could see once the Chaos Caucus entered the House there'd be no policy discussions or legislation. Nothing but a nonstop circus and social media grandstanding - performance 'art' for the losers on 4chan, 8chan, 'Truth Social' and 'The Donald'.

Republicans
House Shitshow Has a Message for America: GOP Can’t Govern and Doesn’t Want To 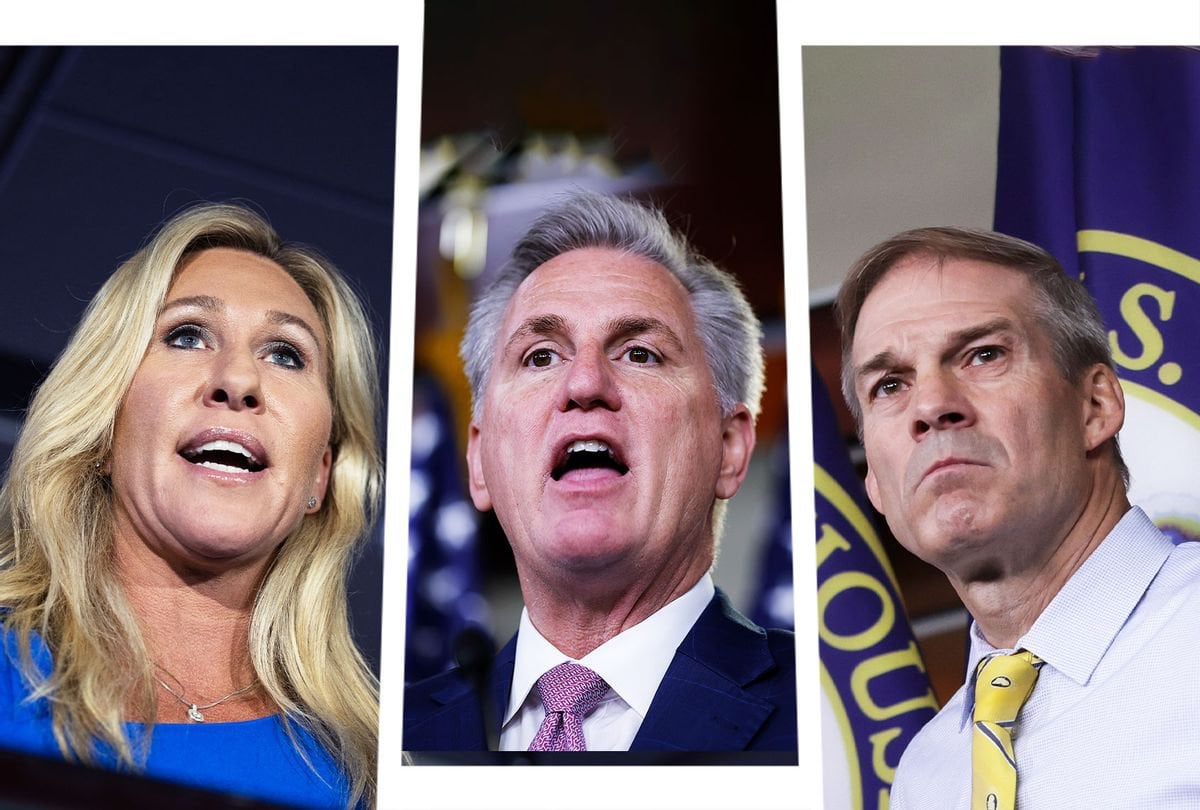 If anyone still labors under the impression that Donald Trump invented the shitshow that is the modern Republican Party, Tuesday's performance on Capitol Hill will have disabused them of that notion. It was déjà vu all over again, just like in 2015 when Kevin McCarthy was humiliated by far right bomb-throwers simply because he was so easy to humiliate, thus giving them leverage and pleasure in equal measure. Poor McCarthy spent the next seven years groveling and genuflecting to these extremists under the foolish impression that they would reward him for his fealty. As Salon's Rae Hodge lays out in detail, on Tuesday afternoon they simply laughed in his face and humiliated him again.

Republicans
McCarthy Debacle Comes With a Lesson: There’s a Downside to Being a Party of Fascist Trolls Media | Republicans
The GOP Is About To Go Wild With Phony Biden Investigations. The Media Must Not Take the Bait. 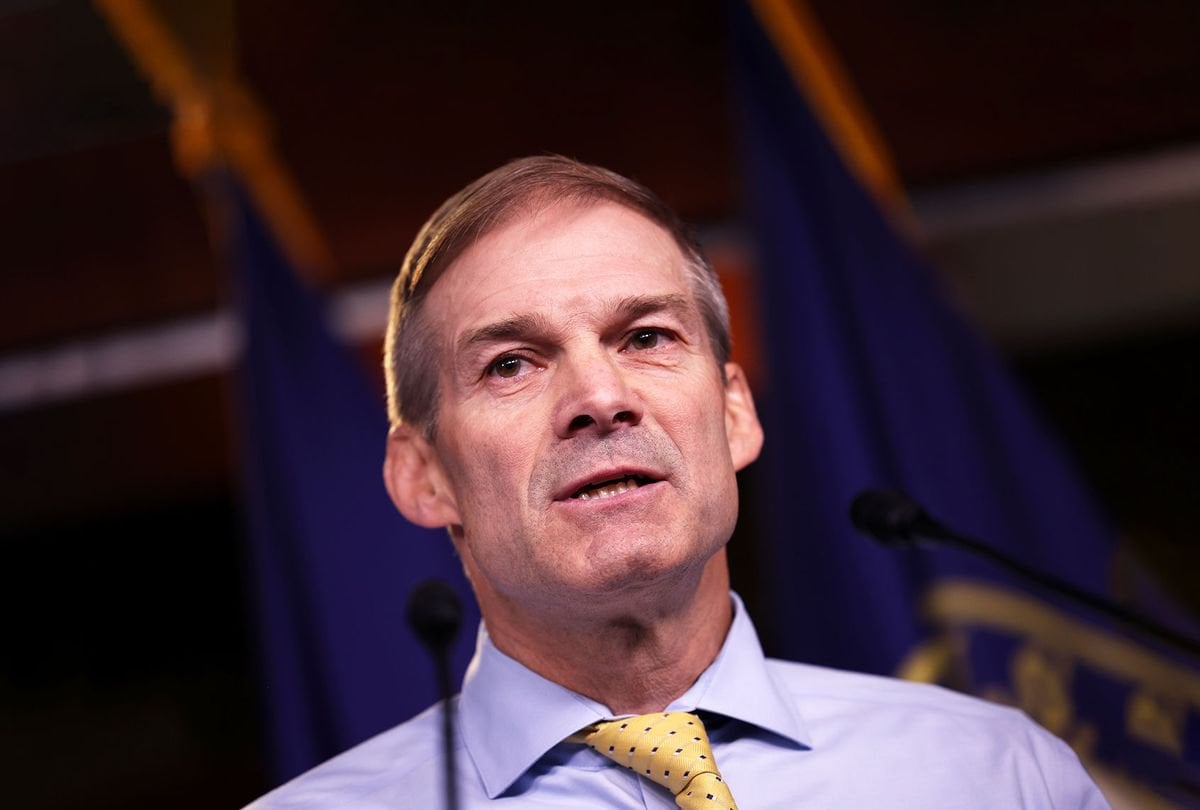 Dark Brandon strikes again! Republiicans have been drooling openly for weeks now over the small House majority they will have in the new year, and not because they have plans for legislation that will improve the lives of Americans. Nah, the blueprint for 2023 is all revenge on Democrats, all the time. Republicans are still salty over House Democrats investigating Donald Trump for minor transgressions like attempting to overthrow democracy and sending a murderous mob after Congress and his own vice president. The main form this revenge will take will be endless, stupid "investigations" into the various conspiracy theories about President Joe Biden that have been dredged up from the bowels of right wing media.

Can Republicans Be Redeemed and Readmitted to the Human Race? 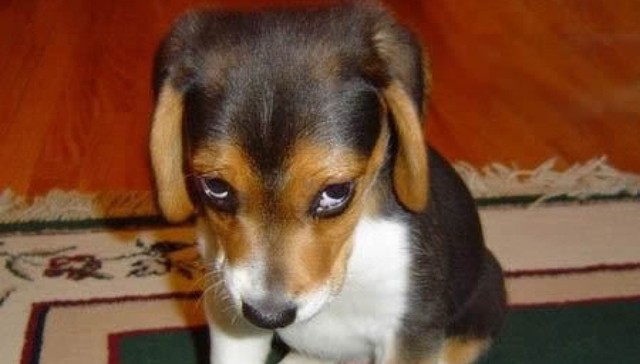 It seems Republicans need a lot of help these days, and though I'm loath to give them aid and comfort, I am, after all, a liberal, so I hate to see the suffering of any wretched creatures from human to animal. And, we surely must admit, with apologies to both humans and animals, that even Republicans exist within that spectrum. We need to show a little mercy for people as confused, as misguided, as divisive, and as morally uncentered as they have so amply demonstrated they are.

The vote for House Speaker continues, moving to round three in with Kevin McCarthy’s hapless bid to lead the tiny minority in the new Congress. This is the first time in 100 years that the Speaker was not elected on the first ballot, something that’s only happened 14 times in history.

Stick with us for as long as this goes, and watch all the fun. We could be here for days 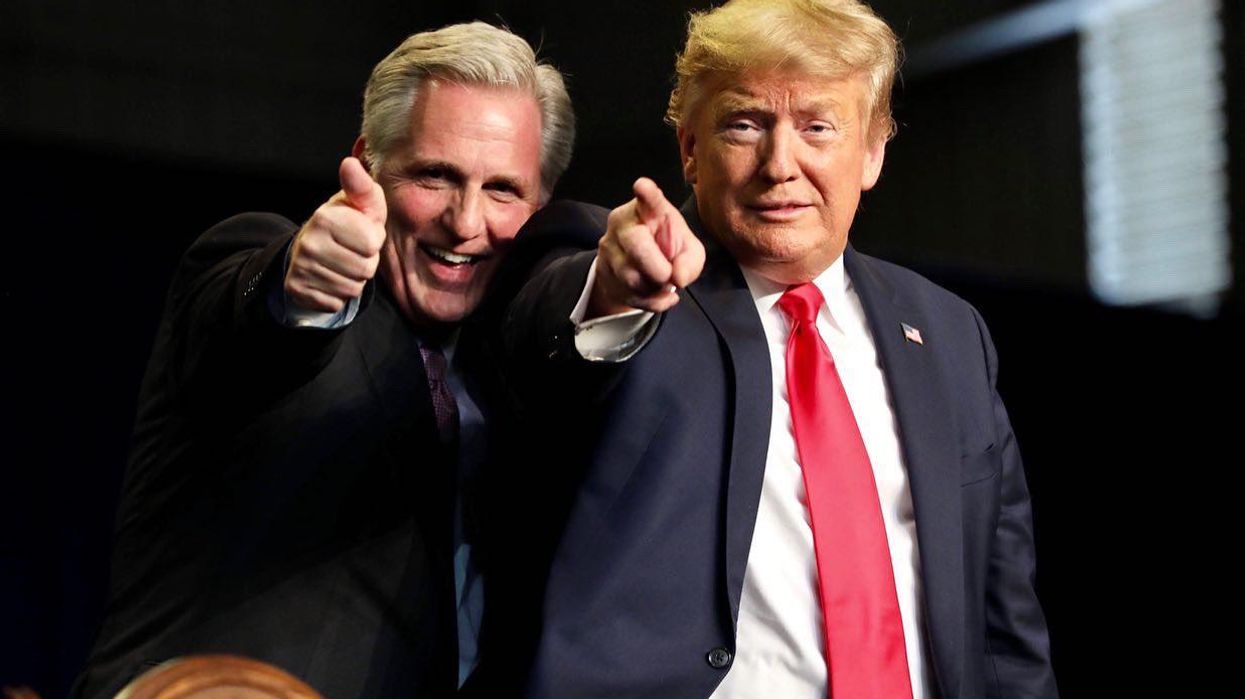