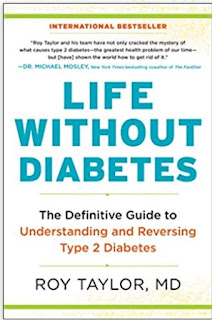 The solution to actually reversing diabetes is within anyone's reach but does require rigid commitment to a plan and seeing it through.  It turns out, however, that Dr. Roy Taylor's method (see book title, image above) is simply too extreme and not likely to be followed by me, having already been provisionally diagnosed as diabetic, e.g.

To break Taylor's book down into its simplest formula:

-  You need to remove a half gram of extra fat accumulated on the pancreas to re-activate beta cells and enable production of insulin again.

-  This will require losing 33 pounds of weight and it matters not whether you are starting at 352 lbs. or 176 lbs.

- The best way for this to happen is quickly, taking in no more than 700 calories a day for at least 8 days.

- A special set of food choices are available - in the book- including for liquid diets and an onion-garlic casserole.

The main specialty of Taylor, who is director of the Newcastle UK Magnetic Resonance Centre, is the use of MRI techniques to see how organs are functioning. In particular, in the case of diabetes, what happens to food in the body – in particular to the pancreas and liver.  Basically, it also involved testing his ‘Twin Cycle hypothesis’ to verify that the best way to achieve diabetes relief is drastic weight loss.

‘Twin’ refers to the role of liver and pancreas in tandem. As he puts it:  “Your diabetes has been caused by less than half a gram of fat inside your pancreas.”

Why so bad? Because that tiny amount inactivates the beta cells in the organ which produce the insulin that regulates blood sugar. Disable that production and the blood sugar (glucose)  increases and next thing, you’re dealing with diabetes.

Fat is the ultimate enemy in the case, or the crime, and Taylor’s MR investigations showed how.  Also, why most obese people (72%) don’t have diabetes. These have the fat on the outside, but are ‘thin’ in the key organs on the inside. Meanwhile, the relative ‘thin’ like me and millions of others now, have the fat on the inside – on the critical organs (liver, which shows up as high triglycerides in the blood) and pancreas – which shows up as insulin resistance.

His acronym is TOFI for ‘thin outside, fat inside’.  Alas, whole populations in the western developed nations have been TOFI’d with BMIs markedly increasing in the last 40 years, say from 27 to 30, or 30 to 35 – putting these groups at diabetes risk.   His reason? We have become constant daytime (and night time) munchers: while reading papers, while web surfing, while watching TV, whatever.  The point is we are altering our chemical pathways in respect to liver and pancreas and slowly but surely bringing on diabetes - even with one more ounce of food than we need each day.  The one verdict you don’t want to hear (p. 159):

“If your body weight stays as high as it has become by the time Type 2 diabetes is diagnosed – then the diabetes will not go away and will get worse.”

“The aim is not the usual, unfocused one of becoming on-obese. Obesity itself is not relevant. What is important is to get yourself below the Personal Fat Threshold.  And 33 pounds is the magic number.”

Ok, what is this Twin cycle business anyway? Take the liver first.  By taking a mouthful or two more food than your body actually needs you gradually increase your liver fat levels.  This makes the liver unable to properly respond to insulin- leading to liver insulin resistance – and blood glucose levels to creep up.

This has been my case for the past 30 years or so, especially since returning to the U.S. where food has been plentiful and cheap. In Barbados, where I’d lived since 1971 (with the exception of one year in Alaska, 1985-86) I’d kept an almost steady weight of 155-160 lbs.  Food was expensive there, with steak and pork chops at nearly $13 / lb. , bacon at $12.75 a pkg. and even a Snickers bar at $4.50, so that you couldn’t eat that much without breaking your budget. (Remember Barbados was and still is an overall food importer).  The only few times a year I ‘pigged’ out were when we went to an occasional buffet at the Hilton or Sandy Lane hotels.

The long and short is that my liver and triglycerides stayed under control, as did the blood glucose level. Fast forward to the U.S. – when we first lived in Maryland- and all that ended. Not that we splurged on food excess, but our eating wasn’t the healthiest. Think Tuna Helper and Hamburger Helper two or three times a week, Kraft macaroni with pork chops, lots of Hillshire Farm beef sausage and broccoli “stews”— with plenty of cream of broccoli soup- you get the idea. Point is we both put on the pounds.   Then going out on weekends to local Columbia -area Maryland restaurants (like 'Clyde's')  didn’t help.

Okay, so we covered the liver part of the Twin cycle, what about the pancreas? Basically, following several years of over eating whereupon liver insulin resistance is reached, the pancreas also is affected. Specifically the insulin-producing beta cells shut down, become inactive. They are basically almost like cellular ‘zombies’ and your job must be to revive them. The bad news?   By then the cycles are reinforcing each other, i.e. “prolonged high glucose levels cause a rise of insulin levels in the blood, while in the liver this causes a further conversion of glucose into fat, e.g. triglycerides.  Too much of this liver fat then drives the pancreas cycle and the high glucose levels eventually force up the insulin levels, driving the liver cycle."

The issue then becomes how to break the cycle and the good doc’s research has shown the best and only way is drastic 33 pound weight loss. (His recipes are at the back of the book).

I wish I was willing to go that route,  but look, it’s hard enough to keep up with the intermittent fasting which I have been doing for going on 4 years now, e.g.

Brane Space: The "5:2 Fasting Diet" - Not Just For Celebs - And It DOES Work! (brane-space.blogspot.com)

The best I can do, or have been doing (on non-fast days), is what I described in my January 3rd post:  cutting out farmhouse bagels 3x a week, and trying to substitute mushrooms for carbs for breakfast, and cutting down on carb intake generally. I had mentioned at the time Maitake mushrooms, but after one horrific bout of  'projectile' vomiting  after eating them 2 weeks ago – I have gone off them. Alas. I now substitute portobello mushrooms every now and then, along with sweet potato fries. (about 6-7 ) eaten with the scrambled eggs, half orange and sausages.

I plan to keep on doing what I can along with the 140-150 mins. of walking during the week and hope that at least staves off the most dire onset phase of diabetes. Including having to get insulin injections -  which Dr. Taylor claims 50%  of those diagnosed with the disease will have to get - if they don't follow his stringent 33 lb. weight loss plan!  (Btw, those 33 lbs. have to stay off, not go back on.)