Capt. Bonespurs' Iraq Strike - Yet Another Desperate Effort At Distraction From His COVID-19 Incompetence

"The coronavirus' outbreak has revealed the full stupidity, incompetence and selfishness of this president to deadly effect...The entire facade of the Trump White House: the gold-plated veneer of power and grift will be stripped bare by a global pandemic and recession."- Richard Wolffe, 'The sick joke of Donald Trump's presidency isn't funny any more', The Guardian today.

"Can the world really assimilate the pain from the grotesque appearance on the American and world stage of an orange orangutan with a limited human vocabulary, with a stapled and torqued on hairpiece, with an orange complexion from a malfunctioning “oranging” bed, and who soon thereafter morphed into a clap and draft-dodging spawn of the devil named Donald J. Trump, scion of the Drumpf real estate and semi-crime family, and who himself was AKA "the walking miscarriage?"-  David Cattanach, 'How Trump Got His Hump And His Bone Spurs',

Captain Bonespurs' latest ordered attack on Iraq fits entirely into his modus operandi of using distraction when he's in the hot seat.  U.S. forces  carried out air strikes in Iraq  yesterday against what the Pentagon described as five weapons storage sites run by an Iranian-back militia, in retaliation for a rocket attack which killed two American and one British soldier near Baghdad.


The tit-for-tat attacks come just two months after a similar escalation brought the US and Iran to the brink of direct conflict. Pentagon spokeswoman, Alyssa Farah, said the strikes were aimed at Kata’ib Hezbollah, a paramilitary group with strong ties with Tehran, which the US blames for Wednesday’s rocket attack.
Don't be deceived! This was a Dotard deflection,  clear to anyone with at least half a working brain after his totally flubbed speech Wednesday night about trying to "ban" the coronavirus (via a selective European travel ban- like it's a terrorist or migrant caravan sneaking in.  See e,g,

Trump is banning travel from all European nations for 30 days - excepting the UK.  What's wrong with this?  First,  for the last several weeks millions - including U.S. students studying in places like Italy - have been pouring in from Europe and haven't even been checked with thermometers.  So, what Trump is doing now is pretty much like shutting the barn door after the cows have escaped.  Second, the UK has more COVID-19 cases than 12 other European nations as pointed out last night by Ron Klain.

So all Trump has done is created a double diversion- using  a specious speech that's totally irrational and does nada, along with his ordered Iraq air strike.  Again, this is all about using crass, self-evident deflection to take the heat off how this imp has totally flubbed any response to the COVID-19 pandemic crisis.  And at the heart of it is how his administration of clowns and trained monkeys have botched the testing aspect.

Millions need testing in the U.S. right now and few are getting it. Hell, even doctors are having to try to beg, borrow or steal test kits.   As this is happening we are poised to see an exponential increase in infections as well as fatalities, just as Italy is now - forcing its Prime Minister to lock down the whole country.

When two nights ago,  Chris Hayes superimposed the graph of U.S increases over Italy's (longer curve) one beheld an almost perfect match at the lower end of recorded cases. As Hayes put it: "It's the exact same trajectory, only a week behind."  Adding, that what we're seeing is what we also saw with Wuhan, China, the virus overwhelming health care capacity.

Dr. Brian Monahan (attending physician to congress) told a closed door meeting with Senate staff  two days ago that he expects "75 to 150 million people in the U.S. to become infected.".  And what is our illustrious preznit Dotard doing? Yapping about a "foreign virus" and an idiotic travel ban that doesn't do jack shit because the virus is already here and community spreading.  (Look at the current state of Washington spread, and New Rochelle, NY.)

Worse, we know this POS is himself likely infected and a vector for transmission (though he refuses to take a test to disprove it).  This was after coming into close contact with a Brazilian official at Mar-a-Lago,  e.g.
https://www.aljazeera.com/news/2020/03/bolsonaro-aide-met-trump-tests-positive-covid-19-200312160741118.html

After being asked about getting a test the mutt then told the gathered press corps  with a straight face "I'm not concerned."   Thankfully, the market gave this orange asswit the proverbial Bronx cheer yesterday after that display of dereliction and imbecility.    What the responsible citizen, i.e. non-FOX watcher (who doesn' t accept this virus - SARS-Cov-2  - was "created by Chinese bats") needs to do is practice rigorous social distancing given we can't depend on the Dotard to protect us.  Yes, he may declare a "national emergency" today, but at the same time he disdains extending Medicaid to the millions who are underinsured, or who have no insurance, including the homeless.   He has said doing the latter (and I quote): is "the Dems giving too many goodies away which they haven't been able to do in twenty five years."

This is the moral maggot, with the ethics of a slug, we have for a leader. 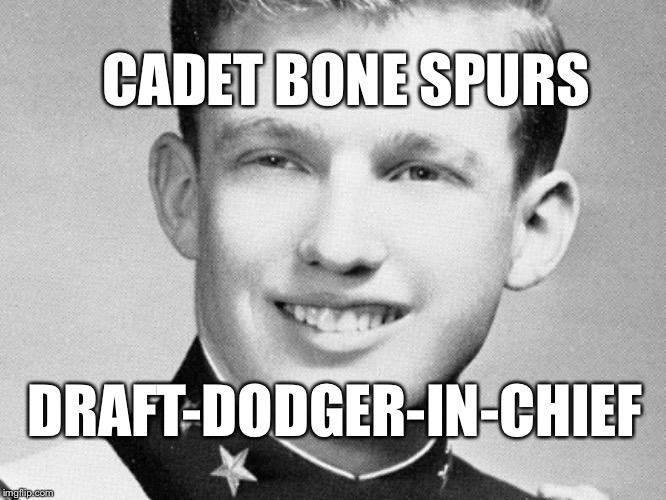 And:
We Need a President Who Cares If We Live or Die. Instead We Have Trump.

"The gross xenophobia of Trump’s prime-time address, like virtually every other aspect of his “leadership,” was both astonishing and thoroughly unsurprising in equal measure. His invocation of a war against a “foreign virus” was a perfect echo of his racist attacks upon immigrants and refugees. Linking diseases to outsiders is an old canard peddled by dubious leaders down through history. Last night, it was precisely the wrong medicine, a hot dose of hate intended only for his base.

And then there were the lies, and the other lies, and more lies to boot. "