In Memoriam: Krimhilde, My Sister-In-Law

Well, we all knew it was coming, but when the text arrived from our niece Christine in Barbados we were still unprepared.  To hear that Christine's mom, and my sister-in law, Krimhilde, had died at 3:45 Bajan time yesterday morning, or 1:45 Colorado Springs time.

Krimhilde had suffered with Alzheimer's disease for the past two and a half years, with the decline slow at first then rapidly accelerating. On Sunday we received perhaps the most imminent notice that she wouldn't last much longer. This arrived via a text from Anthony -  Janice's brother - informing us that Krimhilde had lost the swallowing reflex.  Once that goes, we understand from the course of Alzheimer's it isn't long before the end arrives.

In addition, long before Alzheimer's had taken her thought processes Krimhilde had made it clear she wanted no extraordinary measures taken to assist her or prolong her life. That included giving any intravenous fluids, since of course without the ability to swallow she'd be unable to ingest even water.

That Krimhilde was a spiritually -oriented person has been clear from the time I first began posting excerpts of our conversations, in which I'd ask her various questions, i.e. on the purpose of life and ultimate issues and she'd give her responses.

For example, my conversation with her captured in my post of August 12, 2013.  A few gems:

Q.  Certain Christians of the extreme type would argue that if you don't accept Jesus as Lord and Savior you can't enter heaven. How do you respond?

A.Heaven is in the here and now. We make heaven where we are by expressing love in its highest form. Anyone who would impose or say that one is doomed, or damned because he doesn't believe such and such, cannot be expressing any love. Therefore, his god is already false. It is fiction. A real God - the one of Love  - doesn't send people to any hell for anything. This is what the ignorant do not grasp.

Q. But they would say they are still "saved" because they've accepted Christ as their Savior. They'd say you are in the wrong!

A. Let them say what they will!  It is obvious that if one has so much hate that he believes others - who don't believe as he does- must be sent to hell, then there must be a contradiction. One cannot have love and hate existing in the same Being, and to have a God that would send humans to hell for their beliefs is not a God that loves. It is a fiction that hates. I say it is a fiction because these people created it in their own minds.  If it were true that the God they worship is one of love THEY themselves would show such love in their lives, not with words but actions! They would feed the homeless and clothe them, they would donate their time selflessly to those with less than they have, instead of wallowing in their own self pity and hate.  You can always tell what type of thing a person worships by how he behaves, how he acts. He can say all he wants his God is real, real love or whatnot, but if he himself doesn't show that love it is a fraud.

Q. Well said. Why is it certain Christians, like fundamentalists and so on, get so worked up about Hell, Satan and damnation? It’s like that’s the only note they know how to sound.

A. That’s because their psychic or mental vibrations are operating at so low a frequency that only horrid, nasty things can be conceived of. “Satan” is the product of low vibrations and low mentality. Also, I could say, a brutal and inhuman mentality. Satan is inhuman, no? Thus, the mind that conceives him must likewise be inhuman and hateful. It cannot be one of love.  No higher spiritual person could conceive of such a being. It would be like an exalted master or saint thinking of ways to murder or rape. It’s outside their nature, and therefore impossible. Only a human very close to a bestial nature or disposition could be such a Satanist!

A. Yes! Obviously, if you believe in Satan and that he has as much power in the world, as many of these people claim, you must be a Satanist! You don't have to actually physically worship Satan to be such - just to hold him in your mind and use him as a cudgel against others!

Q. So in terms of the afterlife, you don't accept heaven or hell? A. NO. Absolutely not!  I believe and accept reincarnation.Think of it! How crazy it is to have only one life to live, and one where you may be born with severe mental illness or from a terrible family or with infirmities, then be expected to reach heaven in that one life. It is insane! For example, if you are a backward peasant living in China and have never heard of Jesus does that mean you must go to Hell? No. That is stupid. It isn’t the fault of the Chinese peasant, as he has no control on where he’s born. The only justice system that makes sense therefore is karma (as you sow, so shall you reap) and reincarnation is part of it. Q. So let me get this clear. Say I am a self-professed 'saved' Christian but display lots of hate toward many groups, including Muslims, Catholics, atheists, others,  then in my next incarnation I can expect a not so good life? A. Yes! By the principles of karma you will then be born as one of those people you hated in this life, as a Muslim, a Catholic or even an atheist! You will then have to likely suffer the attacks doled out by the prejudiced that you dole out to them now, by word or deed. It is a way of balance. And until you learn the lesson to accept all people, irrespective of beliefs, you cannot progress! Q. What about the Bible as a book of proclaimed truth? A. As I've said before, those books were written by low vibration people living thousands of years ago, for other low vibration people. We are living in a more enlightened era where we know more. This means our more developed minds need more sophisticated sources. Reading those ancient books or bibles is like a college student groveling around in a nursery and still talking baby talk. Worse, the degraded level of the book writers, especially where they depict this “god” killing humans out of vengeance, is a reflection of their own base nature and desire for vengeance. Their degraded, low vibration souls hate so they write to make their god hate, like them. This bible god is no god of love. The obsession with the 'good book' is based  on the anxiety to be right…..right, right, right….This impulse and need penetrates and suffuses everything. That’s why they clutch their bibles so closely, as if to worship the book itself. I believe they’d all have heart attacks if all their good books suddenly disappeared overnight. They wouldn’t know how to live, and their precious compass for living would be gone.
-----------------------------------------------------

In my post of July 1o this year I even noted Krimhilde's opinion of the evangelicals who are holding on to Trump's coattails.  Her quote was from the last extended conversation I had with her at a family gathering in Barbados in April, 2016.  She said in regard to these evangelical enablers:

"They preach love and God's mercy to sinners, but their souls  have been degraded by  hate. This hate is against all others unlike them, whether immigrants, poor black people  or gays, or atheists.  So they seek to remake  their god hateful in their image.  They also knew they needed a strong  darkness to cover and protect their own hateful darkness so they used Trump to that end.  They really have sold their souls to purchase what they believe is spiritual security but is really selling their souls and faith to a human devil."


In May, 2012, Krimhilde sat down to a lunch with myself, wifey and my atheist friend Rick to discuss the concept of sin, e.g. 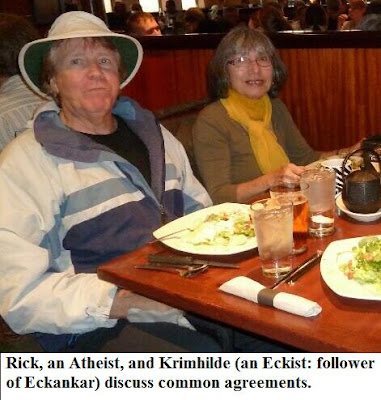 Among the specific topics which came up were: 1) "original sin" and 2) sin in general.

On the first we all concurred that there is no such thing as "original sin" since infants can't enter the world with any such millstones. It was preposterous on its face so Catholic teaching on the matter was imbecilic, unenlightened. Original sin was merely a confection spawned from the brain farts of assorted theological idiots who took the "Adam & Eve" story literally. Humans are evolved apes and thus their behavior is totally explicable in terms of our Simian past and tri-partite brains composed of both more recent structures (e.g. neocortex) and more ancient ones (paleo-cortex, reticular formation).

The generic topic of sin overall, including the "seven deadly sins" was rife with much more debate, with Rick and I tending to the view that they didn't exist, period, and the word was simply invented to make humans ashamed of their animal selves, or their instincts - which yes, could sometimes go into overdrive. Krimhilde and wifey, meanwhile, leaned to a more moderated stance that 'sin' could indeed exist and cited mass murder, rape as examples. The atheist contingent, however, preferred to see those examples as aberrations or deviations. We disdained the term "sin" as too fraught with religious overtones.

In reality,  we generally all agreed that “Sin” is predicated on an exaggerated importance of humans in the universe. Thus, it elevates (albeit in a perverse way) the importance of humans in an otherwise meaningless cosmos. With “sin” the overly self-important and morally smug, self-righteous human has at least the potential of offending his deity – thereby getting its attention – as opposed to being relegated to the status of a cosmic “roach” (which any advanced alien sentience would regard us). "Sin" is thus an attention getter to a Big Cosmic Daddy. As Rick put it, how could a tiny,  finite creature "offend" a supposed infinite Being? It was totally ludicrous.

"Don't forget that for some religions, like Catholics, sin is used as a means of control, as with confession,  to keep the people in check and tied to the Church's apron strings."

For her part, Krimhilde - like me - left the RC Church many decades earlier. Neither of us had been prepared to remain hostage to fossilized relics operating in the Vatican's Curia - trying to tell us how to conduct our lives in a moral frame.  Especially when they couldn't control their own thousands of sexual predator priests.

Krimhilde, who was 84,  had always expected  to be reincarnated - most likely on a distant planet, and possibly in a parallel universe - requested cremation as preparation for that transition. However, a memorial will be held in her honor in Barbados sometime near the end of the month.  Janice will attend while I hold down the 'fort' over here.

Conversation with an Eckankar Adept


When Did My Mom’s Alzheimer’s Begin?

What a most blessed soul! My heart goes out to you, Janice and all who loved and looked up to Krimhilde. What an inspiration for many she was! Thank you for this post, Phil. It gave us great insight of a beautiful soul. Rest in peace, Krimhilde! I regret never having been able t o have met you but have loved and cherished all the stories and memories I have heard by my brother about you. I know how special you were/are to him, Janice and all your family. Sending my condolences to all with much love and healing thoughts.