Greenland Ice Sheet Melt Accelerates- Are We On The Cusp Of The Runaway Greenhouse Effect? 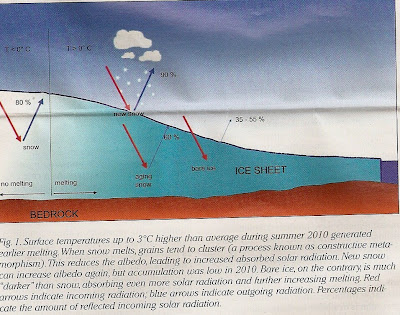 Graphic showing the process by which the Greenland Ice Sheet is melting.


Dog- sledding near Chena Hot Springs, AK in March, 2005. We were unable to go as far as we would have liked because the much higher temperatures had melted the surface ice.


The news that last Wednesday saw record high temperatures in Greenland,  40 degrees above normal, and a record melt event  over the Greenland Ice Sheet triggered more cause for concern among climate scientists.  According to Zachary Labe, a climate researcher at the University of California -Irvine (quoted in The Washington Post):

"It's another series of extreme events  consistent with the long term trend of a warming, changing Arctic..

Meanwhile, Marco Tedesco - an ice researcher at Columbia University, quoted in the same article, noted it's "been extremely warm in east and central Greenland, adding:

In addition, Jennifer Francis  - a leading researcher studying the connections between Arctic change and mid-latitude weather - has noted the relation of Arctic changes to deformation in the jet stream.  She also was one of those who had indicated that such changes could well have played a role in the extreme jet stream patterns that in recent months have wreaked havoc.  That includes spawning tornado swarms and record flooding in the central U.S. during the last two weeks in May. The analogy here has been made to "a refrigerator door left open" - with intensified warming displacing the normally cold air that remains in the Arctic.

"The jet stream this week was one of the craziest I've ever seen!...We can't say yet that the Arctic warming is causing this particular pattern, but it is certainly consistent with that."

This is serious and has grave repercussions continued local (e.g. mid-latitude) weather disruptions as well as sea level rise.  The most critical connection is to the clear change in planetary albedo (the reflecting surface).

Here on Earth we are faced with a positive albedo feedback mechanism playing a major role - driving us toward the runaway. This concept was well explicated by Sagan in one of his essays, 'Ambush : The Warming of the World', in his book:  'Billions and Billions: Thoughts on Life and Death at the Beginning of the Millennium':

"Melting of ice caps (already occurring) results in diminished albedo (reflection of solar radiation back into space), and a darker Earth surface - with more infrared radiation absorbed - reinforcing the tendency while enhancing the melting effect, leading to further darkening of the surface, reduced albedo and more melting."
This mode of positive feedback is what we're faced with in the melting of the Arctic, see e.g.
http://brane-space.blogspot.com/2011/04/bad-news-record-summer-melt-in.html

Adding to the urgency of facing the issue, Harvard climate scientist (professor of atmospheric chemistry) James Anderson has warned in a recent FORBES interview that we may have only "five years left to save ourselves from climate change".

This is given the CO2 concentration currently  in the atmosphere (415 ppm)  hasn't been seen in 12 million years. This condition  is rapidly pushing the climate back to its state in the Eocene Epoch, over 33 million years ago, when no ice existed on either pole. Prof. Anderson, best known for  establishing   chloroflourocarbons were damaging the Ozone layer noted pointedly:
"We have exquisite information about what that state is, because we have a paleo record going back millions of years, when the earth had no ice at either pole. There was almost no temperature difference between the equator and the pole,"


Adding:
"The ocean was running almost 10ºC warmer all the way to the bottom than it is today, and the amount of water vapor in the atmosphere would have meant that storm systems would be violent in the extreme, because water vapor, which is an exponential function of water temperature, is the gasoline that fuels the frequency and intensity of storm systems."
Reinforcing that scenario Harvard's  Anderson acknowledges:
"Can we lose 75-80 percent of permanent ice and recover? The answer is no."
In other words, with that vast, reflecting ice surface gone, humans will have to figure out an alternative means of raising the albedo..  Basically, to avert such feedbacks would require perhaps the most monumental  engineering  effort  in the history of mankind -  dwarfing anything seen  hitherto. It would have to be mounted to reflect as much sunlight away from the Earth's poles as the melting ice sheets are now..   But here's the rub: short of launching into space twenty or so vast reflectors of 20 square kilometers surface each - likely at a cost of $2 trillion per reflector (conservative estimate) - that isn't going to happen.
At the same time as intensifying warmth has accelerated melting in the Arctic and plausibly disrupted the jet stream leading to tornado swarms and flooding in the U.S. , heat waves have scorched India. (New Delhi recently topped 123 degrees F.)  But how many in the U. S. knew about India's travails at the same time flooding and tornadoes savaged the central U.S.?
One problem with educating the global citizenry on the existential crisis of greenhouse warming, is that information tends to be localized.   Hence, a  resident of New Delhi may have no clue of the tumultuous havoc wrought in the U.S. with massive flooding, hundreds of tornadoes and what not. Similarly, the typical U.S. resident may have no clue of the rising, infernal temperatures in Delhi lately, reaching a record 118.4 degrees on June 10   As one VOX media piece put it:  "Caucus voters in flood-ravaged Iowa, can see climate disruption simply by looking out the window."

This information disconnect means too many are unaware of global warming as a global phenomenon.  Even worse, the Trump cabal - "graduated" from climate change deniers to planet destroyers - is now determined to actively interfere in research by federal scientists.  As The New York Times reports , those scientists who prepared the National Climate Assessment will now be instructed not to include the worst-case scenarios of climate change in their reports, so the full extent of potential impacts will be hidden from readers. They will also be asked to project their model results through 2040 instead of the end of the century, masking some of the most dire effects of climate change.

Compounding that, the Trump criminal enterprise is reportedly setting up a “review panel” to publicly scrutinize the conclusions of the National Climate Assessment

Blogger John Atcheson-   much like Harvard's Anderson - put the current crisis in stark perspective when he observed:

"Most of the climate-related estimates you hear in the news and from the IPCC have built in assumptions that we humans will take necessary actions to mitigate the worst of the climate crisis. There’s no evidence that making such assumptions is a prudent thing to do. We’ve known about this unfolding tragedy for three decades now, yet we’ve been steadily increasing the amount of greenhouse gasses we release. In fact, in 2018 we set a record for the most CO2 ever emitted, and for the single largest increase in emissions year-to-year. Meanwhile, in May of this year, atmospheric CO2 levels reached 415 parts per million, a level higher than it’s been for more than 3 million years – literally before the dawn of human existence.

The second reason the climate crisis is likely far more dire than most people have been led to believe is that the IPCC, most of the scientific community, and the media present mid-range scenarios for temperature increases, not worst-case forecasts, and usually they don’t include potentially dangerous feedbacks.."

Let's be clear all of the techno-baloney "solutions" advanced  thus far in order to dodge the necessary revolution in our economic system (based on radical consumption and waste), e.g..
http://brane-space.blogspot.com/2009/11/dont-trust-economists-with-climate.html

- are essentially refined balderdash and baloney.

Hence fixes like tinkering with the amount of sunlight that strikes the Earth by injecting sulphur dioxide into the upper atmosphere (to increase cloud cover)   is like trying to douse a kitchen fire with a cup of water. It simply can't work given the scale of the problem.

The 'good'  news, despite the fact that warming conditions are likely being understated, e.g.

Is that we are not yet at the cusp of the runaway Greenhouse effect.  The late Carl Sagan estimated this sub-threshold to occur near a CO2 concentration of 500 ppm.  We are currently at 415 ppm but the rate now seems to be increasing at 2.5 ppm/ yr compared to the previous 2.0 ppm/yr.   Doing the math this means we'd not arrive at the cusp concentration for another 30 years - assuming of course the rate of increasing concentration stays the same. Similarly, we'd reach the actual runaway (taken as 600 ppm) 40 years later, at around 2089-90.   That means our grandchildren will be the ones having to deal with what can only be regarded as catastrophic climatic conditions.

What about the accelerated melting of the Greenland ice sheet? We can perhaps take some mild comfort from the perspective of Mike MacFerrin - a glaciologist at the University of Colorado.  He has suggested in one recent tweet that it may be too early to panic and the observations of rapid melting thus far in 2019 have merely been "anomalous variations."

Well, we have to hope he's correct.  Ultimately, when all is said and done, John Atcheson is correct and nations have blithely allowed CO2 emissions to increase over 3 or more decades taking us to the brink of climate apocalypse.  Much of this is a result of gov't retrenchment of regulations - say when administrations change in the U.S. (or elsewhere). And not too put too much of a fine point on it but the Trumpies now have rolled back coal plant rules. ('EPA Rescinds Obama Power Plant Rules', WSJ today, p. A4).  As another WSJ columnist (James Mackintosh) noted, nothing will change so long as it remains more profitable to extract oil, gas or coal and burn them.
That leaves humans with a Hobson's choice decision: Enjoy more comfort today using more fossil fuels, e.g. for a/c, heating, plane trips, car trips etc. and toss the planet into the dustbin for future generations. OR shape up, cut back on consumption, allow carbon taxes and at least provide a chance (albeit slim) of leaving their progeny with a halfway livable world.


The Climate Crisis Is Also a Health Emergency

Life Changes At The Cusp Of The Runaway Greenhouse - Brane Space