Victories Over The Frackers You Likely Never Read About 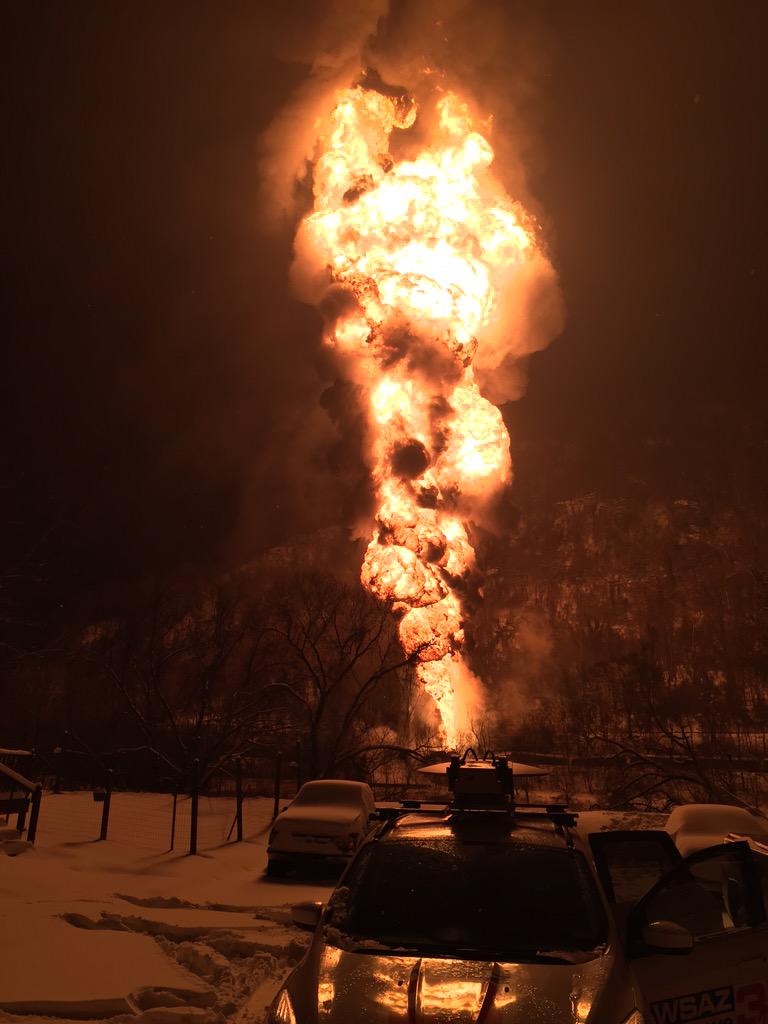 Frack train explosion near Fayette, WVA, and fracking well in the midst of a Colorado community - now leery after a home explosion  in Firestone, CO (see below) following a gas leak from an uncapped ("orphan") well.

It's a good bet the horrors of fracking often recede too rapidly from Americans' consciousness, including the  derailment and subsequent explosion of a train bearing volatile material near Fayette Co., West Virginia 3 years ago. The ensuing conflagration resembled iconic images of Dante's Inferno as portrayed in several works of art. Giant fireballs lurching into the skies, forcing the evacuation of two WVa towns as another CSX owned train met its demise.

The train had originated in the Bakken oil shale fields of North Dakota and not the first incident to involve Bakken-crude, which kerogen is some of the most explosive stuff on Earth.  Recall last April another Bakken-carrying CSX train derailed near Lynchburg, VA. In December, 2013, a massive fireball erupted over Casselton, ND and in July, 2013, 47 people died after a train carrying Alberta kerogen crude derailed in the middle of a town in Québec.

Less well known was the  April, 2017 explosion of a home in Firestone, CO,  killing two, traced to a methane leak from an uncapped, "orphan" well.

Amidst such horror stories it might be easy to miss that there have been some victories over the frackers, including here in Colorado - one of the major fracking states.  Two of the bigger victories yu may not have heard about:

1) The banning of fracking in Maryland:

After five years of sustained campaigning, citizens of the Free State managed to get its legislature to pass a statewide ban on fracking  and moved its Republican governor to sign it into law.  Maryland's achievement will also serve as a model for Florida and other states where the fracking fight is currently gaining momentum.

2) Two fracking pipelines have been stopped in New York.

That includes the Northern Access pipeline and the Valley Access Pipeline. In each case there will be blockage of fracked oil as well as volatile kerogen on the Hudson River,

3) In Colorado, the legislature and governor have moved to cap all orphaned wells, such as the type that led to the home explosion in Firestone.

House Bill 18-1098, sponsored in the Colorado House by Reps. Lorie Saine, R-Firestone, and Matt Gray, D-Broomfield, and carried in the state Senate by Fort Collins Republican Sen. Vicki Marble, could well be the only oil and gas-related measure to make it through the legislature this year.

The bill was approved 35-0 in the Senate on Thursday, March 29th,  after having passed the House in a 58-0 vote March 9.  Gov. John Hickenlooper signed thee bill into law on July 18th. It will now allocate $5 m to cap 269 orphan wells.   This will be paid for by expanding the state commission’s ability to keep unspent money from an environmental response account, rather than transferring the year-end balance into another budget account.

The state agency can then continue to use money in that fund to pay for properly capping “orphan wells” that have been abandoned by their original operators.  (Such as the uncapped Andarko well that caused the Firestone explosion.)

Of course, many more victories are needed, including having a fracking moratorium for Colorado communities that want such, as well as increased offsets to fracking wells - especially given their noise and pollution.  (Denver Post, August 6, 2017, p. 1A, 16A). People who not too long ago plopped enormous money into new homes near the Front Range are now faced with the brutal fact they can't sell them for a lousy dime. Who wants to live near fracking -drilling operations, no matter how grand the interior (or exterior) of a home?  And that's even given the home building crunch in the state.

What's even worse is that the problems of noise, oil fumes, methane leaks (such as caused the explosion of a home in Firestone) are likely going to continue until all orphan wells are capped.And who knows how long that'll take?  More worrisome,  the Colorado Oil and Gas Conservation Commission - a fake name if ever there was one - has approved or received nearly 3,400 new drilling permits as of mid-July, 2017. Even accepting not all of the new permit applications approved will end up as new wells, many will.  Also, permits show where the oil-gas producers want to go and as the Post noted "much of the activity is centered in Colorado's prime growth corridor."

In the Post's activity analysis (op. cit. p. 16A) it was found that of the 100 Colorado  townships examined (each measuring 36 square miles) "55 were rural with few inhabitants and 45 contained incorporated areas." However, the numbers are misleading given that "the number of permits in rural regions were about half that in populated areas."
But at least we have a start in getting some control of the frackers in our state. Who knows? Ultimately newer regulations may make it too costly for them to operate here.


"it turns out that developing and installing the technology to reduce fossil fuel use — known in the industry as “energy efficiency” — creates many more jobs than fossil fuels.


Energy efficiency jobs in the United States totaled 2.18 million in 2016, more than double the total of fossil fuel production and fossil-fuel based electricity generation combined.."