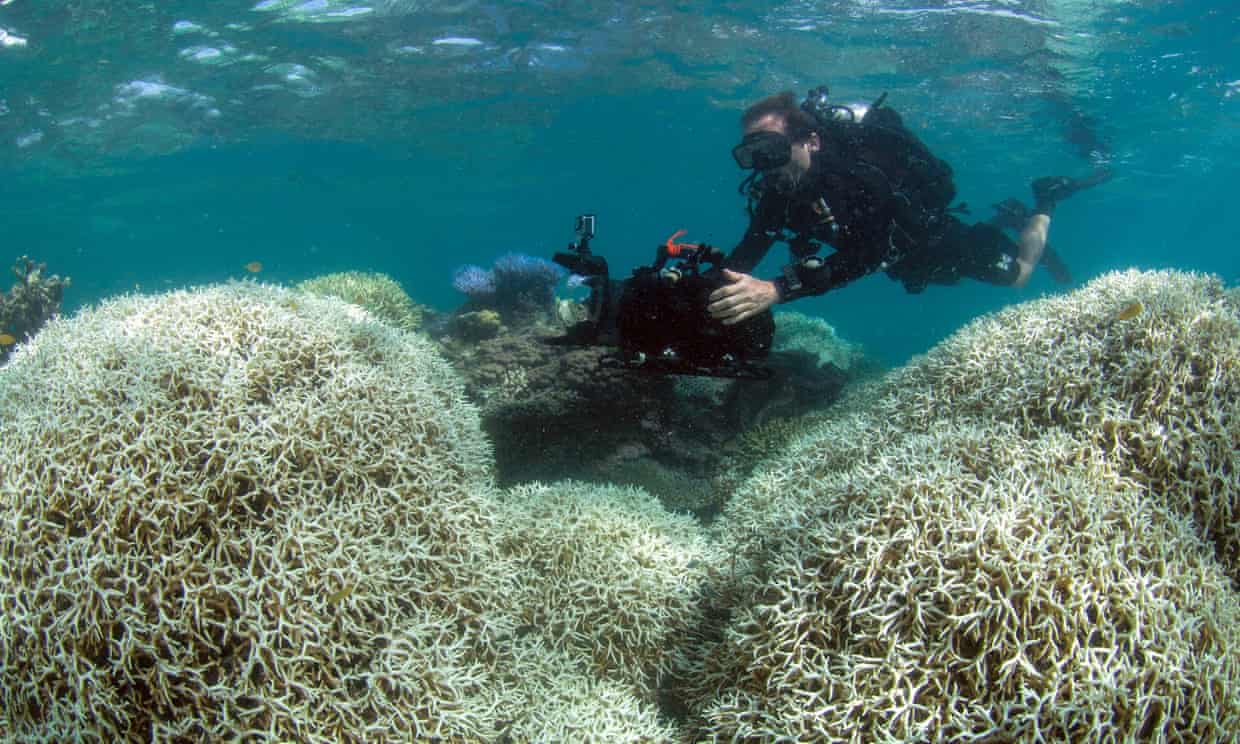 
Even as climate denier and EPA head Scott Pruitt  set to obliterate that agency's ability to keep us informed, new findings reveal that the sheer dimension of the climate change crisis upon us is rapidly defying  hyperbole.   I have tried in previous posts to alert blog readers, followers to the magnitude of the crisis (also referenced Naomi Klein's must -read book, 'This Changes Everything') but words begin to fail as the latest revelations have been made from three academic sources.

This is in stark contrast to the codswallop of Scott Pruitt, Trump and their motley crew of climate change deniers who've left a  bewildered global public in the wake of their deception, lies and distortions. Because as I've shown repeatedly,, the science behind climate change is rock solid with the impacts – observed on every ecosystem on the planet – are occurring faster in many parts of the world than even the most pessimistic scientists predicted.   In this regard, I probably became even more pessimistic after seeing the state of dying corals off Barbados south coast several years ago while in a submersible craft, e.g.

The degree of bleaching and coral death was appalling, given how many other aquatic species depend on the corals' health. Janice even expressed the unspoken fear of many accompanying us in the voyage of 'Atlantis II': "I wonder if any sea life will be here when we come back again."

Given this, it’s logical to assume life on Earth – I'm talking about the millions of species that cohabit our little ball of rock in space with us – would be impacted. But for me, Janice and many others who looked at what's going on, it's unnerving to discover that this is no longer about just polar bears; coral reefs and sea turtles. No,  it's about practically everything – including us- the human inhabitants and would be stewards of this world.

Anyway, three recent studies have illustrated just how widespread climate change’s effect on life on our planet has already become.  A team led by Bret Scheffers of the University of Florida just published a  study in Nature Climate Change in February that found that 47 percent of land mammals and 23 percent of birds have already suffered negative impacts form climate change. In all, nearly 700 species in just these two groups are flagging under climate change, according to this research.

Scheffers is also the lead author of a landmark Science study from last year that found that current warming (just one degree Celsius) has already left a discernible mark on 77 of 94 different ecological processes, including species’ genetics, seasonal responses, overall distribution, and even morphology – i.e. physical traits including body size and shape.

A few examples to fix ideas: woodland salamanders are shrinking in the Appalachian Mountains; the long-billed, Arctic-breeding red knot is producing smaller young with less impressive bills leading to survival difficulties. Meanwhile, the alpine chipmunks of Yellowstone National Park have actually seen the shape of their skulls change due to climate pressure.. And as reported in the Denver Post two days ago, young black bear cubs and their sows are now awakening earlier from hibernation each year because of warmer temperatures, and finding scarce food stuffs forcing them to raid human garbage bins. Thereby putting humans at risk as well as the animals since in most Colorado counties it's 'three strikes' then out as in euthanized.

In a second study by James Watson of the University of Queensland  the IUCN Red List has been referenced noting it only considers seven percent of mammals and four percent of birds as threatened by climate change and severe weather. The IUCN often drags behind the latest science – many species wait decades for an update while most species on Earth have never been evaluated. In a press release related to his work Watson noted that in worst-case scenarios, species are simply vanishing, adding: "There has been a massive under-reporting of these impacts."

A third study – in PLOS Biology – found that more than 450 plants and animals have undergone local extinctions due to climate change. Local extinction, as its name implies, doesn’t mean the species are gone for good, but that they have vanished from a portion of their range. For example, the barren ground shrew has seen its range constrict aggressively as its tundra home warms. The Mountain Lion here in the mountain West has likewise seen its range dramatically reduced as well as its numbers.

According to John Wiens, one of the study's co-authors,  based at the University of Arizona:

It needs to be pointed out that such global extinctions have already happened. Last year, scientists discovered that the Bramble Cay melomys – an Australian rat-like rodent – went extinct  (it was last seen in 2007) due to rising seas inundating its tiny coral island.  It’s the first mammal confirmed to be pushed to extinction entirely due to climate change from our fossil fuel addiction.

Wiens’ study also found that local extinctions were happening more in the tropics than in temperate areas. This is worrisome since the tropics harbor the vast bulk of the world’s biodiversity, with many tropic species still unstudied and even undiscovered by scientists. But all the studies' authors have been alarmed by the fact changes are rippling even beyond single extinctions.

“We now have evidence that entire ecosystems, some the size of entire states within the USA, are changing in response to climate change,” said Scheffers. He pointed to kelp forests that he said “are dying” and being replaced by rocky, less-productive ecosystems.  Here in Colorado one in 14 trees is now dead and the number of gray-brown still standing-dead trees has increased 30 percent since 2010 to 834 million, the state’s annual survey has found. The dying trees are  largely the result of massive infestation by the mountain pine beetle -  now able to reproduce more rapidly because of warmer than average winters.

So the land forests are affected as well as kelp forests. The latter are made up of giant brown algae, with kelp as tall as trees providing essential nurseries for fish, protecting coastlines against worsening storm surges, and storing vast amounts of carbon.. But increasingly warming waters combined with ocean acidification is taking its toll.

UF's Scheffers expects more “ecosystem shifts,” as scientists describe them, in the future. Cloud forests are at risk of becoming high altitude grasslands, coral reefs of becoming algae-dominated ecosystems, and Arctic sea ice is being trans open ocean.  In the words of John Wiens:

“Given what we are seeing now, just imagine what will happen to all these species when temperatures increase by four of five times that amount,”

If  our global market and consumption society doesn’t reduce its fossil fuel addiction – and quickly – scientists estimate that temperatures could rise 4-5 degrees Celsius by the end of the century. Such a rise would be not so much catastrophic as apocalyptic. The difference is that you might barely recover from the first, though be without key resources (like rebuilding after being hit by an F5 tornado) but in the latter, there's no coming back, period.  Scheffers again:

“One thing that is certain is that this global response to climate change points to an increasingly unpredictable future for humans,”

According to Scheffer’s research, humans will see a drop in productivity for various crops or timber species, a drastic loss in marine fisheries, a potential rise in new diseases (Avian flu?)  as well as diseases (like dengue fever)   spreading to places they’d never been before. Meanwhile, declines in coral reefs, kelp forests and mangroves will lead to more lives lost in climate-fueled storms. Loss of global biodiversity will also have knock-on effects in societies around the world, from less productive ecosystems to impacts we simply can’t predict today.

Scheffers said of his research in a press briefing:

“I was not surprised. But I was alarmed. The extent of impacts is vast and has impacted every ecosystem on the Earth.”

Scott Pruitt, his denier brigade and most of the mainstream media might well dismiss these warnings as "alarmist".  But it’s past time responsible people set off the alarms – screw Trump, Pruitt and the Trumpkins who inveigh against reality with their 'fake news' balderdash.  Indeed, as David Suzuki and others have noted the alarms should have started ringing in the 1980s and been deafening by the early 1990s.  Alas, the well- funded deniers went into full obstruction and distortion mode, often assisted by a complacent media more invested in "balanced" reporting than scientific reporting.

For his part, Scheffers believes there is still time to avert the worst, including:

“Governments investing and committing to reducing carbon emissions and protecting natural ecosystems that increase resilience to climate change not only for nature but for people as well,”

He added:. “These include large areas of connected forests which cool local and regional climate, pristine coral and oyster reefs that not only provide food but reduce storm surges, and well managed watersheds that will maintain adequate fresh water.”

Wiens agreed, but added that “there also needs to be more, bolder, large-scale

All of which is well and good, but ignores one huge, monumental problem: With Trump and his cabal in office none of those investments will be done to change the dynamic. Perhaps the largest CO2 polluting nation will also now be doing more coal burning, essentially cancelling out what any other nations do or don't do.

Without Trump and his gang in place there might have been a chance to achieve what Scheffers and Wiens suggest, but the odds with them there? Basically zero.  Even if by some miracle we managed to oust Trump and the Reepos, four years lost would be four years too many.

We are in for a rough climate ride and it's only beginning. Buckle up!
Posted by Copernicus at 8:32 AM