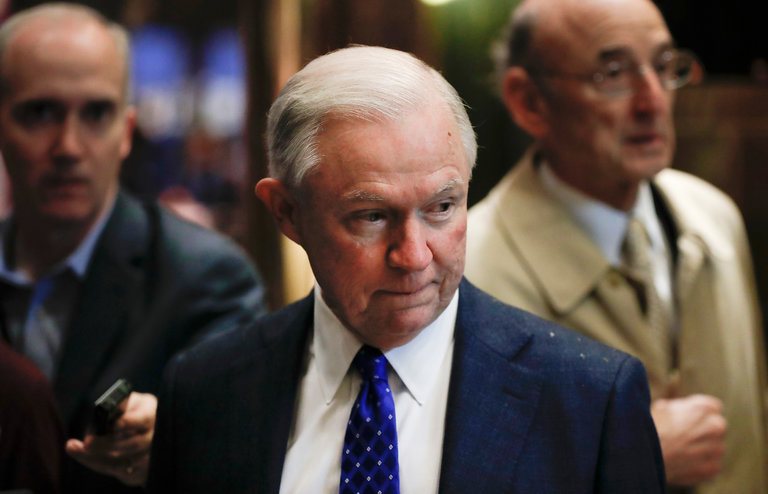 AG  Jeff Sessions comes across like a character out of the 1936 farce "Reefer Madness".

The recent remarks of AG and proto-Confederate leftover Jeff Sessions against states with recreational marijuana laws, now has Colorado lawmakers ready to defend the state's $1 billion market and thousands of jobs dependent on that market.  Sessions' antagonistic remarks in a number of venues, some of which I highlight below, set Colorado lawmakers' on edge from their first utterance two weeks ago. Now, they are ready to do whatever necessary to defend the CO economy (faltering because of fracking pullbacks owing to a glut of shale oil)  and that includes revision of existing laws spawned by Colorado's Amendment 64 - passed by a clear majority of the state's voters in 2012.

Sessions' recent aggressive and outdated remarks meanwhile harken back to an era where virtually nothing was understood about marijuana and hence, it  served as a vehicle for government propaganda and control.  Who can forget the 1936 government -produced farce entitled "Reefer madness"?   This was an obvious propaganda exploitation effort revolving around the melodramatic events that ensue when high school students are lured by pushers to try marijuana. Their travails extend from a hit and run accident, to manslaughter, suicide, attempted rape, and descent into madness.  At least one voice over insinuates that "these are bad people" doing the business of spreading demon weed.    This farce could have been produced by Jeff Sessions, given its cornpone, low brow cheap messaging, especially after Sessions was recently heard  to bloviate "good people don't smoke marijuana". Uh, yes they do, especially if they have physical infirmities and diseases which the weed ameliorates. Or, they're on cancer treatments (like chemo) and it helps them stop barfing enough to eat.

Originally it had been financed by a church group under the title "Tell Your Children". Its primary mandate was circulation and screening to parents as a  putative morality tale, attempting to teach them about the dangers of any cannabis use by their kiddies. Perhaps two decades later any viewing of this dreck became so laughable that it emerged as a cult film - shown to audiences primarily as joke material. Which is rightly the niche to which it belongs..

Enter now Sessions, ardent segregationist and putative top "lawman",  who plans a new "war on pot", despite the fact any such crusade will directly affect millions of Trump voters - which may well cost the GOP the 2020 presidential election. Let's also process, factoring into this, that MJ has helped propel billions of dollars into states' tax coffers that otherwise wouldn't have been available. Not to mention thousands of jobs - especially for returned vets-  who otherwise might be unemployed - or only able to be Walmart workers.  In Colorado, these vets are putting their service skills to use by acting as guards for transport of MJ retail sales money. As one Iraq vet said, "if I lost this job I don't know what the hell I'd do, especially at the pay rate".  Is Sessions and his DOJ bunch prepared to live with this if they mount an attack on all MJ states?

Sessions said in Arizona last Tuesday, “you would have thought the biggest issue in America was when I said, ‘I don’t think America’s going to be a better place if they sell marijuana at every corner grocery store.’ (People) didn’t like that; I’m surprised they didn’t like that.”

But like most of Sessions’ blurtations on cannabis, he was dead wrong, and showed his take was more fit for fake news hysteria. Consider that marijuana is non-deadly, and barely 9 percent of those who try it develop an addiction.  By contrast, heroin is an opioid that killed more than 12,000 Americans in 2015, and 23 percent of heroin users become addicted. (Worth noting: Prescription opioids such as OxyContin, morphine and Vicodin accounted for an additional 16,000 American deaths in 2015.)  If Sessions were really serious about combating a drug epidemic and not merely posturing, he'd go into coal country where opioids are now proliferating.

Sessions recently said, “I think one of (Obama’s) great failures … is his lax treatment in comments on marijuana.” It’s true that Obama told The New Yorker in 2014, “I don’t think (marijuana) is more dangerous than alcohol.” In 2016 Obama told Rolling Stone he believed cannabis should be treated like “cigarettes and alcohol.” Sessions blasted such remarks as lax, but they were actually fact-based. A straightforward research effort, including stats from the National Institutes of Health would have disclosed to Sessions that excessive alcohol use kills nearly 90,000 people each year in the U.S., while cannabis use alone is responsible for zero deaths in recorded history.

Alcohol and opioids combined kill more than 100,000 Americans each year, cannabis kills none. That is, there are no existing statistics to show cannabis has been singularly connected to any traffic deaths or other deaths.  There have been claims by assorted exploitative agents of misinformation to link MJ either to murders they themselves committed or the suicides of others, but not to the extent of isolating MJ as any unique, proven culprit. For example, Richard Kirk of Denver has claimed he should be found not guilty of first-degree murder because he was having "edible marijuana-induced hallucinations" when he shot his wife.  But most sober people put this in the same category as mass killer Ted Bundy's blaming his exposure to porn for his serial killing of women in the 1970s-80s

Journalists have also easily tracked down megabytes of anti-cannabis propaganda from Sessions’ recent interviews on the subject, and his “corner grocery store” opinion was far from the most egregious.  Sessions’ supposed surprise on the subject  is also unfathomable and discloses his brain may be trapped in a 1950s time warp. Or, possibly even the 1936 era of "Reefer Madness".  Why should Sessions be surprised that Americans “didn’t like” his anti-legalization stance in an era when 60 percent of Americans want legal cannabis, one in eight U.S. adults say they currently consume marijuana and state legalization initiatives are going eight for nine on Election Day?   Let alone his baseless campaign against a non-lethal plant-based drug that has, by every available metric, proven itself to be significantly safer than many of the other substances we vend recreationally?

In this light and with good ol' Johnny Reb Jeff on the warpath, Colorado is now taking defensive steps to protect itself against fed assault on Sessions' watch. That includes state lawmakers (including GOP) signing a "in case of crackdown" bill to allow cannabis recreational cultivators to transfer their plants to the medical arena to avoid federal confiscation. As we know, the medical MJ side has been around much longer than the recreational and will be much harder for good ol' boy Sessions and his crew to undermine. (The major downside is that the state would collect a lot less in taxes because medical MJ is taxed at a significantly lower rate).

Even Gov. John Hickenlooper is now getting involved and has advised lawmakers on the optimal defensive approaches as a possible Trumpie fed crackdown looms. Once an Amendment 64- MJ skeptic "Hick" said in a recent Denver Post interview:

"I'd say that the (marijuana) experiment - as it continues to move forward- has gone certainly better than I anticipated and I think better than many people have anticipated."

This was not long after having, earlier this month, joined other governors of states that have legalized cannabis consumption in sending a letter to Sessions. In that missive, the governors requested the Trump cabinet members to "engage with us before embarking on any changes to the regulatory and enforcement system".

Hick himself has held out no hope for any reversal of existing policies without great mishap. This in turn has driven him to cooperate with state legislators to toughen defenses.  One of these is to scrap the implementation of recreational MJ clubs, at least for now, until Sessions casts his jaundiced eyes on some other hot topic (porn?) . Recall "Initiative 300" passed in CO last November.  This extends Amendment 64 and allows MJ users to use it publicly, e.g. in bars, cafes and even Yoga studios. Hitherto, those who purchased MJ had to return to their own homes and be out of public view.

The good aspect is Colorado is prepared to go to the mat against any potential Sessions' MJ crusade, to protect jobs and economic interests. As one lawmaker wryly commented: "Funny how these guys come down on the 'nanny state' - unless it's a nanny state they advocate."

Indeed.  So, it really appears the invocation of "nanny state" depends on which citizen actions require a state "nanny".
Posted by Copernicus at 7:24 AM