Worms in Human Brains: Why The Epidemic? 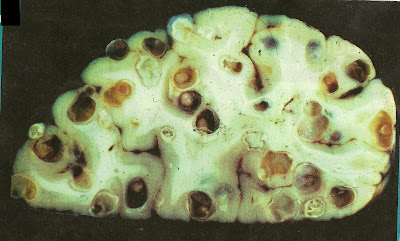 In parts of the West Indies, it's often seen with people that babble on street corners, or act aberrantly in other ways, stumbling, slurred speech and behavior otherwise mistaken for that of an excess rum drinker. In extreme cases, victims experience violent seizures, become partially blind or lapse into comas. When they arrive at a hospital, if they can, shunts often need to be implanted to relieve cranial pressure - because worm cysts have unleashed so much fluid in the brain.

Parasitic worms, especially which burrow into brains, aren't everyone's cup of tea - but on account of global warming or for whatever reason, they seem to be proliferating and causing an epidemic. Mainly one species, identified as Taenia solium, or the tapeworm. Best known for inhabiting the human intestine, where they can reach a length of 21 feet - and make the victims feel as if they're constantly hungry. Hence, they may consume gargantuan amounts but only to feed the worm or worms.

Less well known is that before the worms become adults they spend time as larvae in large cysts, which may find their way into the brain (see image) and cause a condition known as neurocysticercosis. Lowball estimates suggest 5 million cases of epilepsy arising from this condition, worldwide. The numbers seem to be increasing as the worm -cyst invasion of the human body is increasing. Most of the cases, understandably, are in the less developed world.

The spectrum of possible damage is mind blowing. For example, once having migrated to a brain, the cysts can thrive there for years feeding off the nutrients in the environs. As the cysts grow they can push relentlessly against critical regions of the brain causing a spate of symptoms. Some doctors in the Caribbean believe a number of cases where islanders have run amuck with machetes arose from cyst pressure on the amygdala - the "fear center" of the brain.

In other instances, a cyst can get stuck in a passage way, blocking the flow of cerebro-spinal fluid and lead to a condition called hydrocephalus or water on the brain, along with a dangerously high pressure. The resulting brain hernia can lead to stupor, coma or death.

Even when the body's immune system works to confront the invader cysts the way it should events may not unfold well. The immune system's attack on the resident cysts may then cause the surrounding brain tissue to swell, with inflammation. Worse, a calcified cyst can keep triggering such immune reactions for years.

One forecast by some biologists, is that as global warming ramps up so will the invasion of a host of pests, including parasitic worms, including fluke worms. See, e.g. http://brane-space.blogspot.com/2011/08/biological-nightmares-of-climate-change.html

We have already beheld the spread of West Nile virus, but dengue fever isn't far behind. The several thousand new cases of worm infestation in U.S. brains now documented may well be the leading edge of a stronger invasion. Who knows how many will end up with cysts in their brains, say after another 1 degree Celsius of warming, virtually fueling a tape worm explosion - mainly in the South.

It is well to be aware of these pests, and also to be alert for the signs of possible quirky behavior in others, who may already have cysts in their brains such as those shown.
Posted by Copernicus at 1:23 PM

Good Lord! Thanks for the info.