How Did a Once 'Good' Planet Go Bad? 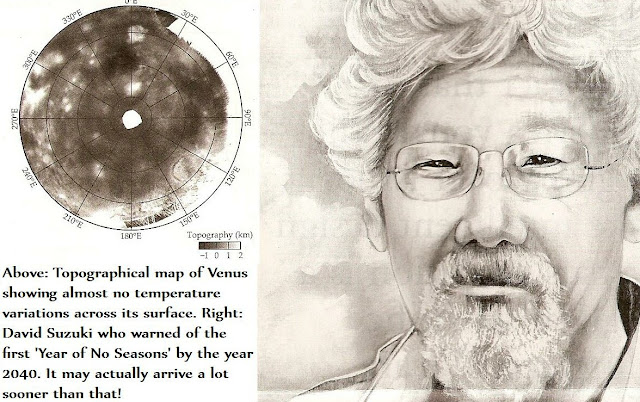 I'm writing of Venus, of course. It has puzzled astronomers since finding out much more concerning its physical properties, including those it likely had in the past. While David Suzuki (shown in the graphic above) believes Earth's fate may be to evolve to another Venus - beginning with the first 'year of no seasons' ca. 2040 (or perhaps sooner), how is that once good planets go bad? Well, in the case of Earth, as Suzuki has noted, it will be because the dominant species wasn't an adequate caretaker or steward, and allowed the love of energy to trump all other concerns....especially the levels of production of CO2 beyond the ability of planetary reservoirs to handle it.

But what of Venus? How did it go awry? Most astronomers believe that when Venus and Earth formed out of the solar nebula 4.5 billion years ago, they were essentially 'twins'. Indeed, back then the Sun was dimmer (full nuclear reactions hadn't yet begun in its core) and hence Venus was cooler.  Further, analysis of hydrogen molecules in the Venusian atmosphere - by NASA's Pioneer-Venus Probe- indicate that Venus once even had liquid water on its surface, perhaps even expansive oceans as large as the Pacific.

But compare that to now, with the planet perpetually enveloped in dense clouds of carbon dioxide and sulphuric acid, with temperatures at a near constant 900 F. It is clear that learning the object lesson of what happened to our neighbor planet can have mighty consequences to what may befall our own (though admittedly not from the same causes).

If indeed, Venus started with more agreeable temperatures, and actually had large bodies of water, then at some later point in its history it had to have reached a tipping point, perhaps similar to one which we are now approaching on Earth.  The onset of the Venus tipping point meant that the planet overheated and as it did so all the water on the surface evaporated. This water vapor then would have filled the atmosphere, with the water vapor more efficient at trapping heat, which would have caused more evaporation, and so on.  This is what we mean by a "positive feedback loop".

At some point, however, CO2 would have had to have been unleashed, since H2O vapor alone would not have done the trick. Even a tiny, minuscule amount of CO2 is vastly more efficient at blocking the re-radiation of energy than any amount of water vapor- at those bands. Part of the misconception arose because early researchers, lacking the current technology of infrared spectroscopy, assumed that water vapor bands already blocked out most of what would be taken by CO2. (Cf. ‘The Discovery of the Risk of Global Warming’, by Spencer Weart, in Physics Today, Jan. 1997, p. 34). A relevant article in Eos (Vol. 83, No. 34), from August 20, 2002, ‘Progress Made in Study of Ocean’s Calcium Carbonate Budget’, notes that sedimentary carbonates represent the largest reservoir of carbon on Earth.

If then Venus had abundant stores of such carbonates, i.e. in surface rocks, this would explain the progress toward the runaway greenhouse effect, as the massive amounts of CO2 in those rocks was liberated under extreme heating - initiated from the water vapor greenhouse.

The author of the previous cited piece, notes also, in terms of our own planet: “a third of the anthropogenic CO2 that has been added to the atmosphere since the middle of the 18th century has been absorbed by the oceans".

This means that the oceans, acting as CO2 reservoirs, have actually masked the worst effects of global warming. And that when their saturation point is reached, the spillover effect will be rapid and calamitous indeed.

Perhaps we need to pay much more attention to our own planet and especially its carbon load and carbon footprint made by each of us, lest we hasten our path to becoming another Venus. Why do good planets go bad? Maybe because natural conditions incite the bad effects in the first place, or.....maybe a resident species aids and abets the natural causes by consuming too much of the wrong form of energy!

A very well-written and frightening post indeed. It looks like we humans are that resident species responsible for destroying the homeostasis of planet earth. And we simply cannot give up fossil fuels as evidenced by the doubling of col usage over the last decade. Suzuki is right: we cannot shoehorn the ecosystem into our energy-intensive society and economy.