Why DO Reeps & Libbies Suffer from the Smart Idiot Syndrome? 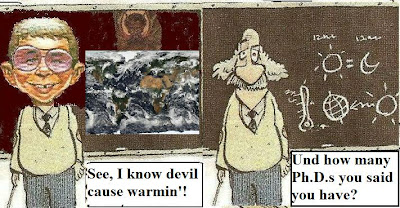 For the past two years, as a member of both Mensa and Intertel I have had to challenge either articles, or opinions expressed (which often appear to be in the majority) that global warming is a "hoax" or "fraud". Now in Mensa we are talking about the top 2% of IQs or over 130-135 depending on which test is used. In Intertel we are talking of the top 1% of IQs or 135-142, again depending on which test (e.g. Stanford-Binet, Wechsler-Bellevue etc) is employed. So one would naturally expect that any given member of either of these groups would know what he or she is talking-writing about. Alas not! Led by their Libertarian ('Libbie') tendencies, most allow economics and Ayn Randianism to trump science and common sense and tow the line of FAUX News, the Heartland Institute, the Global Warming Coalition and other denier-flat Earth enclaves.

A classic case of what I am writing about appeared in The Mensa Bulletin of March, p.28, 2008, wherein regular contributor Marty Nemko asked ten questions of “climate change alarmists” . One of his questions was:

"If global warming is substantially man-made, why have CO2 concentrations increased in the last decade, yet the average global temperature hasn’t?"

Which disclosed he couldn't even get basic climate facts correct, since as I responded by citing report entitled: ‘Warm Oceans Raise Land Temperatures’, appearing in Eos Transactions, Vol. 87., No. 19, 19 May 2006, which noted:“

"It is recognized that land temperatures in recent years have consistently been above normal with indications that 2005 was the warmest year for globally averaged temperatures within the instrumental record.”

So one had to wonder where Nemko was gleaning his info. But then one beholds a question that embodies the very Randian heart of his Libbie mentality:

"Why should we spend many billions and greatly restrict freedoms when experts believe that even if global temperatures rise, efforts to slow it will fail?"

Showing once and for all Nemko's concerns aren't with the science but with economic effects and "loss of freedoms" - never mind the Earth becomes an inferno!

But this is typical of the "smart idiot" syndrome. Nemko is smart, he has to be in order to be registered Mensa material, but his Libbie tendencies allow his ideology to trump the scientific facts and thereby confect pseudo-scientific bollocks....except in the odd question...like the preceding where he betrays his real intentions.

According to a 2008 Pew report (issued not far from when Nemko's jabber emerged) all or most of the intense divide in the U.S. over the reality of global warming is politically partisan in basis: political conservatives no matter how well educated (and even members of the High IQ societies such as Mensa and Intertel) don ‘t buy it (and believe they’re smarter than their peers for not doing so) while political independents and progressives (Democrats for the most part) do accept it.

This is genuinely maddening for bona fide climate scientists, since the advance of modern climate research (as I’ve shown in multiple recent blogs) has actually seen a paradoxical tendency for the educated sides to widen even further as the basic facts about global warming have become more firmly established. Those facts are these:

1)Since the Industrial Revolution, humans have been burning exponentially more fossil fuel to power their societies.

2)This has led to a steady accumulation of greenhouse gases, especially carbon dioxide, in the atmosphere.

3) CO2 derives its heat-retention properties via the vibrations associated with its molecule.

4) Its toll over time is assessed by the fact that its deposition -activity time is close to a century. This means that every ton of carbon or CO2 deposited continues its influence up to a century after entering the atmosphere. Also, each additional ton added multiplies the effect of the original amounts.

5) The cumulative effect by now is that we are adding 2 parts per million of CO2 concentration each year, to an existing concentration of ~ 374 ppm, with a runaway greenhouse effect threshold near 450 ppm. This means at the current level of demand we are barely 50 years from the runaway which has the potential to convert Earth to another Venus.

Now, the most mind disconcerting aspect of the Pew report is the bifurcation along political party lines. For Republicans, having a college degree is essentially useless (just as belonging to a High IQ society) in terms of appreciating the global warming threat. Worse, as they added education –including post –graduate, they didn’t appear to be any more open to what climate scientists have to say. Better-educated Republicans were more skeptical of modern climate science than their less educated peers. Only 19 percent of college-educated Republicans agreed that the planet is warming due to human actions, versus 31 percent of non-college-educated Republicans!
For Democrats and Independents, the opposite was the case. More education correlated with being more accepting of climate science—among Democrats, dramatically so. The difference in acceptance between more and less educated Democrats was 23 percentage points.

What the Hell is going on here? I think the explanation is relatively simple. The politically conservative and pseudo-Randian "Freedom" end of the political spectrum has been hijacked by agnotology to act as useful idiots for the economic fascists. These fascists don't give two shits about the planet, or the welfare of the billions that inhabit it, they're only concerned with securing their profit margins and the mobility of their capital. They (correctly) perceive that both would suffer if carbon limits were imposed, since the mobility and preservation of capital depends on energy - which in turn depends on the production of fossil fuel with carbon emitted as waste. Hence, limits to carbon deposition imply limits to profits and capital.

But....since financial fascists are fundamentally dishonest they couch their objections in terms of either restricted liberties (actually, the liberty to plunder the vulnerable to get their oil to generate their profit machines etc) or pseudo-science confected in one of their think tanks devoted to the purpose.

But at the end of it all, the bottom line is agnotology, public relations. Stanford historian of science Robert Proctor has referred to agnotology as the the trend of skeptic science sown deliberately and for political or economic ends - e.g. in imparting ignorance and faux skepticism. Derived from the Greek 'agnosis' and hence the study of culturally constructed ignorance, It is achieved primarily by sowing the teeniest nugget of doubt in whatever claim is made (and as we know NO scientific theory is free of uncertainty).

The key is that the doubt doesn't concern any underlying science, but rather creating a subterfuge by which to attack the science. Proctor notes that when a society doesn't know something it is often because special (often paid) interests have worked hard to sow immense confusion on the issue. People read 'A' then see 'B' ostensibly refuting it, and without a hard science background themselves (at least two years of university physics or chemistry plus calculus), are "lost at sea". Among the top machines for this purpose, are Faux News and its clones.

No surprise then that Tea Party members appear to be the worst of all. In a recent survey by Yale Project on Climate Change Communication, they rejected the science of global warming even more strongly than average Republicans did. But then, since they consume the agnotology of Faux News more faithfully than any other demographic, why express surprise?

As for Marty Nemko, and his fellows in Mensa and Intertel, as well as the thousands of Reepo Ph.D.s who reject global warming, it is likely due in part to agnotology and in part pseudo-intellectual skepticism combined with a large dollop of false pride. I also behold this phenomenon on the allexpert.com astonomy site, where more than a few "experts" have fallen into the comforting trap of global warming denial while believing they are really the ones "in the know". Alas, they are fooling themselves and only disclosing they don't know dot.

The hard fact is that the REAL climate scientists, not pretenders or wannabes, accept the factuality of global warming. Indeed, the extent of scientific consensus on global warming was revealed in a survey report (Eos Transactions, Vol. 90, No. 3, p. 22) authored by P. T. Doran and M. Kendall-Zimmerman who found that (p. 24)

Alas....Marty Nemko, probably most of Mensa, Intertel and the Repuke post-graduate brigade are not included among "those who understand the nuances and scientific basis of long-term climate processes.”
Posted by Copernicus at 12:43 PM