Atheists Have to Show More Tolerance! 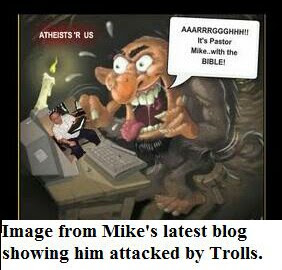 I know that Pastor Mike, my youngest brother, is not easy to take. Normally he is manageable in small doses, and even then the intensity can be wearing - unless one understands his military, police-background. Then, one can make some allowances. However, many atheists from around the world now attacking him with venom and death threats do themselves no favors, and in fact, play right into his hands. They show themselves to be no more tolerant than he is, and indeed- worse- because while he merely proposed a possible "national registry" of atheists in normal every day language, they have come back with emails laden with extreme foul or violent lingo.

In his latest blog (now with restricted access, by his invitation only as per email frmo his yesterday evening):

Pastor Mike actually published some of the invective-laden emails dispatched to him, while also adding that he now regards them as "his property to dispose of as he chooses" (with which I totally agree). Some of the examples (which Mike insists are not the worst):

I have seen your idea regarding the list of atheists, where they work and so on - I would like to say one thing, and one thing only. You are a pathetic excuse for human life. I "pray" that you get hit by a fucking bus asshole.

--
Isn't the internet great. It allows shitheads like yourself to say shit that would, in real life get your head cracked open.

Please turn to the loaded gun in your drawer, put it in your mouth, and pull the trigger, blowing your brains out. You'll be doing the whole world a favor. Shitbag.

I would love to smash your face in until it no longer resembled anything human, faggot.

Can you please remove yourself from the gene pool? Preferably in the most painful and agonizing way possible? Retard

Die painfully okay? Prefearbly by getting crushed to death in a garbage compactor, by getting your face cut to ribbons with a pocketknife, your head cracked open with a baseball bat, your stomach sliced open and your entrails spilled out, and your eyeballs ripped out of their sockets. Fucking bitch

I really hope that you get curb-stomped. It'd be hilarious to see you begging for help, and then someone stomps on the back of your head, leaving you to die in horrible, agonizing pain. Faggot

Shut the fuck up f aggot, before you get your face bashed in and cut to ribbons, and your throat slit.

Fuck off and die you worthless yank moron. Pity you didn't die on 9/11"

--
Save me from pastor Mike.

fuck you pastor mike. I'd like to give you a one way ticket to Jesus so the living won't have to put up with your bullshit.

I'll kick your mother fuckin believing ass straight to the Lord and you can believe that. All you suppositious fuckers keep mankind in the dark ages and killing one another over belief in God.

Now, is this really the level to which WE, as atheists - and putative exponents of enlightened thought - have been reduced? Is this the best sort of response we can manage? Have we totally lost the ability to argue based on reason? Are we so seized by hatred that we can only froth at the mouth and allow our lizard brains to take over?

I mean, come on, fellow atheists! Grow up! Don't reduce yourselves to Mike's intolerance! Instead, if you do send emails, state in basic terms why and how you believe even the remote concept is a bad idea. Or, go through some of my past blog comebacks to the pastor, which - while they do show intensity and aggressive attitude, don't cross the line to writing things like "pity you didn't die on 9-11".

When this sort of vitriol is indiscriminately lobbed, it reduces all of us as atheists to no better than the most intolerant, nutbag fundies. I don't care if it's in an email either. In fact, it's just as bad or worse, because now you've delivered straight to his inbox loathsome material he can go on using indefinitely! The "gift that keeps on giving"!

Take some time, fellow atheists, before you so cheaply discharge your feelings - intense though they may be- in such reckless ways.

Yes, the guy is my brother - but this isn't about being overly protective to him as Mike can take care of himself. This is about we as atheists showing a higher standard and having some ballast when we insist that Christian fundamentalism is fundamentally intolerant. Because when we fire off such emails as those above, we lose our base argument before it even begins to be made!

Posted by Copernicus at 9:25 AM