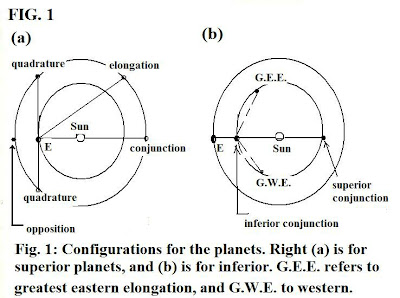 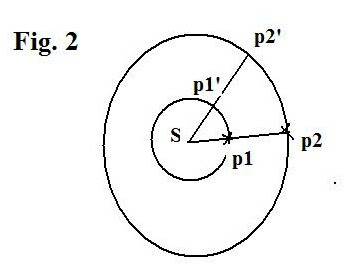 Among the more important considerations for serious amateur astronomers concerns the sidereal and synodic periods of the planets, and translating between them. In general, we define the synodic period to mean the time interval for the revolution of a planet as determined from the same phases, which means in turn the same geometrical configurations. (E.g. or between the same configurations, say between the same oppositions, or between "inferior conjunctions" - see Fig.1).

As indicated by a study of Fig. 1(a), a superior planet (say Mars)may appear to to be 90 degrees away from the Sun in the sky. Therefore, a line from Earth to the Sun makes a right angle with the line extending from Earth (E) to the planet. A planet in this configuration is said to be in quadrature. (The planet rises or sets at noon or midnight).

Another aspect or configuration is referred to as elongation. This is just the angle formed between the Earth-planet direction and the Earth-Sun direction. In other words, this elongation is the angular distance from the Sun as seen from the Earth. In the case of the inferior planets (such as Venus and Mercury) one will have a maximum western elongation, and maximum eastern elongation, as shown.

The sideral period is the time interval for a planet's revolution about the Sun reckoned against the fixed stars. We photograph a planet at point 'x' in its orbit, with the stars determining a specific background format, then again when it reaches the same point x, relative to that background.

Of particular interest also in these computations are what we call the 'mean motions'. Let P1 and P2 be the sidereal periods of revolution of two planets around the Sun, then the mean motions are defined:

where we assume for example, that n1 > n2

which confirms that a planet nearer the Sun has a smaller period of revolution than one further away so that P1 < P2, and also: n1 > n2.(BY VIRTUE OF THE SMALLER PERIOD IT HAS A MORE RAPID MEAN MOTION!)

By inspection of Fig. 2, let the alignment Sp1p2 denote the positions of the Sun, Venus and Earth at a particular time or "epoch" in the parlance of celestial mechanics. Then, it is clear on the same inspection that one synodic period S will have alapsed by the time the two are in the alignment Sp1'p2'. So, during the time interval S1 (for Venus) its radius vector will have gained 360 degrees on the Earth's.

Which is exactly the synodic period for Venus!

Or, by reference to the earlier formulations for the n1, n2 mean motions:

In most problem -solving scenarios a planet's period is sought when Earth's is known. The key to the solution lies in determining whether the unknown planet is an inferior one (e.g. interior to Earth's orbit) or a superior one, e.g. exterior to the Earth's orbit. Thus there emerge two cases:

(a) The planet is inferior (like Venus), then P1 refers to the planet's sidereal period and P2 refers to Earth's.

(b) The planet is superior (e.g. Jupiter) then P1 refers to the Earth's sidereal period and P2 to the planet's.

Venus is an inferior planet, so that Earth's period is inserted for P2.

(1) What would be the sidereal period of an inferior planet that appeared at greatest western elongation exactly once a year?

(3) A planet's elongation is measured as 125 degrees. Is it an inferior or superior planet?

(4)If the sidereal period of Mercury is 88 days what is its synodic period?

(5) Calculate the ratio of the Earth's mean motion, n, to that of the planet Neptune, given the distance of Neptune is 30.06 AU. (Hint: You will need to apply Kepler's 3rd or harmonic law, see 'Tackling simple Astronomy problems (6)' to first get Neptune's period!)

(6) A newly discovered planet in the Zeta Reticuli system is found to have a semi-major axis of 10 AU. Compare its mean motion n(z) to that of Saturn (hint: reference solution to Problem #2)

Posted by Copernicus at 9:06 AM