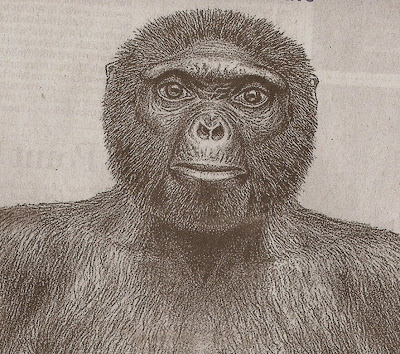 
As revealed in today's SCIENCE Journal, there's been a new and momentous addition to the hominid family, which includes humans: the find is of a female fossil skeleton and is known as Ardipithecus or "Ardis" for short. This find, excavated by an international team, is 1 million years older than the previous one - designated "Lucy".

The find will be documented today in no less than eleven research papers, and reinforce the status of a common ancestor of both chimps and humans (although the aboriginal ancestor remains to be identified, and is likely as much as 2 million more years earlier than this one. As readers may know, the location of fossils becomes much more difficult as their age increases, especially because the Earth's crust isn't stable but shifts due to tectonic activity).


As it was, this find had to be critically pieced together using highly specialized equipment that wouldn't have been available to researchers such as Richard Leakey when they made their earliest finds. In particular, the creature's skull was in so many pieces it had to be reconstructed digitally via the use of CAT-scans and over a thousand hours of computer processing. The pelvis required six years to reconstruct in a project involving 47 research scientists worldwide.

From putting the clues and pieces together, researchers have learned this ancestor of ours had a brain about the size and mass of a chimp's, and also walked upright. But as seen from the image shown (Fig. 1) based on fleshing out the skull, "she" was not at all chimp-like in facial structure, with a much flatter, more humanoid face. Her height was probably close to 4' 4" and she weighed in at 110 pounds.

The tragedy of the Ardis find, of course, is that ardent religionists will see it as one more threat to their fairy tale book of biblical origin stories like "Adam and Eve". As well they should. Because each new evolutionary find like Ardis or Lucy puts another nail into the coffin of such insipid and unsupported drivel. And it effectively marginalizes further those who somehow think evolutionary theory has it wrong- and their infantile Adam and Eve are fact.

While it’s inevitably true that there is a residual incompleteness in evolutionary science (on account of the difficulty of highly dated fossil excavation), the positive evidence for the fact of evolution is truly massive, made up of hundreds of thousands of mutually corroborating observations. These come from areas as diverse as geology, paleontology, comparative anatomy, physiology, biochemistry, ethology, bio-geography, embryology and - increasingly nowadays - molecular genetics. The weight of the evidence has become so heavy, indeed, that opposition to the fact of evolution is laughable to all who are acquainted with even a fraction of the published data.

Some aspects of the massive amount of American ignorance especially are worth noting. For example, in a 2004 U.S. News & World Report piece, Stephen J. Gould was asked about the whole phenomenon of resistance to evolution. Gould replied that it was peculiar to Americans- and that no other western nation "of any strength or power" had such problems. Based on surveys and international tests given in the sciences, as well as math, one can easily conclude however, that this American exception is due to massive American ignorance. An ignorance that is breathtaking and born out by statistics, such as:

- 47% of Americans, including 25% of college students, believing humans did not evolve.

- 60% believing that creationism ought to be taught alongside evolution despite the fact that it has no separate repository for its own scientific facts which have been tested based on the premise of attempted falsification.

- A majority believe that humans existed alongside dinosaurs like T. Rex. - despite the fact no human fossils have ever been identified or dated in those (e.g. Jurassic) layers.

More recently, a Charlie Rose interview (on PBS YOU) featured E.O. Wilson (the great Harvard biologist) and James Watson (co-discoverer of DNA with Francis Crick). When notified by Rose that more than half of Americans refused to accept evolution, and instead accepted biblical or "divine creation" , both Watson and Wilson expressed little amazement. As Watson pointed out (and Wilson agreed) :

"what do you expect when you conduct polls of the uninformed who never have read Darwin, far less examined what natural selection means".

In my own casual poll, when I taught a handful of fundies at Barbados Community College, I once asked them if any had ever actually read The Origin of Species. Not one indicated he had. Thus the massive ignorance Watson pointed out, for how can one know enough to critique a theory if he hasn't even read it?

Wilson went on to note that he believes the "frontier nature" of the country - founded via expansion of wilderness by descendants of Puritans, and others led to this. It caused them to band into small communities and take their bibles along as their one certainty against the vagaries of nature, not to mention Indians. It led to their obsession with biblical literalness and refusal to accept anything beyond the borders of their "good books". (Which is why the most illiterate segment of the American populace - outside their good Book- remains Christian Right American Fundamentalists. They average 1 book (other than the bbible) read every seven yrs.)

When asked about Darwin's influence, and Evolution itself, both men were clear and succinct. Darwin was indeed "the greatest man ever to have lived on Earth" since he placed humans in their proper perspective, according to Watson. Wilson added, it was so "frustrating to be a modern biologist because each new idea you come up with you think is original, Darwin already thought about it or mentioned it earlier in one of his works".

On the issue of "evolution as the means of divine creation" Watson gave a good chuckle and noted how that was ridiculous on its face. With the role of DNA as the evolutional information molecule now well elaborated, evolution was clearly autonomous and anyone who remotely understood natural selection and what it meant would grasp that. Alas, most Americans - even so -called educated ones, do not. They rebel at the notion of chance, algorithmic processes governing our world, but that is what's happening.

As Watson noted, "There is absolutely NO role whatever for any divine interference in nature" and Wilson agreed, also adding, "No scientist I know of accepts evolution on that basis ....""Except one", Watson chimed in. "Collins!" And both scientists chuckled. Watson then remarked - as Rose's eyes widened to the size of saucers:

"It is amazing how much simpler everything is without God".

By which he meant, of course, rigorous observations making sense in the context of existing theory without dragging in nebulous, and specious externals.

At least evolutionary scientists, such as the ones who achieved the Ardis find, are able to specify necessary and sufficient conditions for their find to be acknowledged as a genuine human ancestor. Up to now, no Christian believer has been able to achieve the same thing with respeect to his God.
Posted by Copernicus at 10:54 AM