Can "Pastor Mike" Pass A Basic Test on Biblical Exegesis from a Jesuit University? 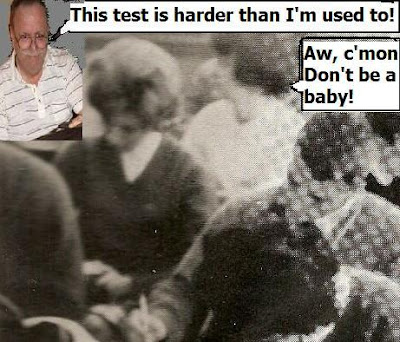 We know the guy is long on bluster and bellicosity, and claims to be taking high level "biblical" courses (toward some kind of 'degree' I presume) from an online Bible College. But this elicits the question of whether Mikey can even score one question right, far less pass, a serious test from a real university.

Well, to answer this, I managed to dig up an old test on biblical Exegesis from Loyola University. I will provide the questions below, and lay anyone ten to one odds "Pastor Mike" (as he liked to once call himself, before getting his online presence shut down for proposing a National Atheist Registry) won't even address them.  Anyway, the test is below, should he possess the cojones to answer them - say via comment mode. (No, Mikey, I promise over my dead pet gator Gonzo's body, not to publish them!)

1. Estimate the percentage of the Qumran scrolls that are copies of books of the Bible. Of which proto-canonical books were there copies or fragments? Of which deutero-canonical books? Define each type of book, making clear any unfamiliar terms.

2. WHY are the Qumran scrolls of such great importance? Why would it be erroneous to conclude that these scrolls provide us with the original reading of the New Testament books?


4. How (not how much) have the Qumran scrolls contributed to our knowledge of the history of Judaism? What caution(s) must we keep in mind when reconstructing Israelite history from these scrolls?

6. Discuss the moral views and practices of the Qumran sectarians as they might have impacted their texts-scrolls. Give at least two specific examples and expand on them at length, including likely copyist errors.


7. Half the original manuscript witness sources, including a Bodmer papyrus and Beza's Codex, omit the last line (accorded to Jesus) from Luke 23:33-34. What does this omission convey concerning the textual tradition of this sentence? What general caution does this provide concerning exegesis for the synoptic gospels in general?


8. Some Protestant biblical scholars used to hold that St. John's Gospel could not possibly have been written by a Jewish Christian living at the time of Christ. They asserted it was more likely written in the 2nd or 3rd century A.D., because of the terminology and ideas in St. John's Gospel reflecting an abstract dualistic theology (e.g. emphasizing the conflict between light and darkness).

Explain how the Qumran documents smashed this theory. Why would Jesus (as reported in his speeches in St. John's Gospel) have used such terminology and ideas?

9.  Discuss fully the new insight for interpreting the 'Epistle to the Hebrews' which we get from the Qumran scrolls.

10. The word "mystery" (Greek 'musterion': 'what is known only to the initiated') occurs twenty seven times in the official New Testament and almost all these occurrences demonstrate the "secret infrastructure of a nascent cult". Further, a careful reading of the Pauline Epistles, and Gospels (supplemented by modern documentary discoveries- such as at Qumran) shows Christianity began as a mystery religion, replete with initiations, secrets and multiple levels of indoctrination.

The 'mystagogoue' element is also very evident in passages such as 1 Cor. 2:6 ff.

Explain the nature of a "mystery religion". Do you concur that Christianity - from the scriptural elements, passages noted- qualifies as such? Why or why not? If the negative, provide an alternative exegesis to make sense of 1 Cor. 2:6 ff.
-----

Come on, Mikey! Give the test a try! Or, are you worried that your online background from 'Smokehouse Online Bible College' won't be adequate to meet the challenge?

Hey, no problemo! I understand! There are some things you're cut out for (e.g. putting photo-shopped .jpg images of Krimhilde, my Eckist sister-in-law and myself into Hell cartoons on your graffiti blog) and some things beyond you. Like passing a basic test from a real university, or hell even taking it!
Posted by Copernicus at 8:59 AM

Let me get this straight. You want me to take a "test" from a Catholic Jesuit Univ., when not only is Catholicism diametrically opposed to the Word of God, but the Jesuits themselves are the “storm troopers” of the RCC, and their purpose is propagation of the RC faith by any means possible? (i.e., SATAN!)

When we compare their beliefs and practices with the Bible, however, it would appear that they have “a form of godliness, but denying the power thereof” (2 Tim. 3:5).

The fact is, Mikey ---- my little backward bro, that there is tremendous overlap with what was taught at Loyola and the general way most biblical scholars approach exegesis.

So, in a way I am not at all surprised you'd proffer some specious "bible-based" excuse. Hell, you can't even make up your mind whether the Bible can be interpreted or taken literally. (No, sorry, they are mutually exclusive so you can't claim both!)

I'm also not the least bit surprised you'd craft an escape hatch full of bollocks, given your online Bible school teaches one one hundredth what we had at Loyola.

Using the Jesuits as "storm troopers" is beyond pathetic when the real reason you won't even try is that you lack the educational wherewithal and support to deliver one single coherent answer.

I should add here that the concepts and themes of proto-canonical and deutero-canonical books are generic to ALL biblical exegesis/scholarship. So is the existence of the Qumran scrolls, Dead Sea scrolls. Hence, to complain about any test with such content is totally absurd.

Hence, to dodge questions- even on these - is to disclose a lack of confidence to answer them in the first place. Or, maybe not having been exposed to them at all.

In any case, to drag in the Jesuits, 'Satan' and 'Catholic universities' as excuses not to answer is merely to expose yourself as adopting a transparent smokescreen.

More importantly, it doesn't serve to commend either your online bible school or your evangelicalism as worthy challengers to even a 1st year Loyola theology course!

Tell ya what, Phil. As I mentioned in prior posts, when you start holding other books of antiquity to the same standards you hold the Bible to - AND, scrutinizing THEM in the same way you do the Bible, then I'll perhaps take you seriously.

Until then, no matter what answers I may give you on your "test," they'd be "wrong" (according to YOU!)

Hell, even if I "passed" (under YOUR criteria), you'd accuse me of cheating.

Simply because you don't accept the TRUTH, doesn't mean it is NOT the truth.

Sheesh! (I still say you're a 'closet Catholic')

Mike, your complaints are spurious and daft. WHAT other books of antiquity? You don't even mention them.

Here's what I can say: IF a so-called 'book of antiquity' has undergone any kind of exegesis of its own, and been scrutinized on its own merits, then I do accept that such work is worthy of consideration as perhaps a contribution to human spiritual advance. Even in that case, however, I regard NO book as possessing all of truth - since for multiple reasons I have gone over before - NO one book can hold all of truth!

Unless, one is fully aware of the implications in that content, one: a) hasn't a clue about 'truth' or where found, and b) certainly can't tell another anything about his own pursuit of it! Nor can he claim to know whether in fact another accepts it or not!

One last thing, it is paranoid presumption of the highest order to try to impute I'd accuse you of cheating if you passed the exegesis test. In fact, IF you did I'd slap you on the (virtual) back and say 'Well done!' You're bible online college is as good as Loyola. But to pre-empt even attempting it on the excuse I'd call you a cheater, is again merely exposing yourself as using a smokescreen.

As for being a 'closet Catholic, ROTFL! I don't think even the new pope would let me in if he knew I didn't accept: 1) papal infallibility, 2) the Catholic Church as the 'one true church' or religion, and 3) that Jesus was a God -man.

You wrote:
"WHAT other books of antiquity? You don't even mention them."

Verily...the post(s) I saw (i.e. on the Dead Sea Scrolls and origins, etc.) merely reinforce my point that you have no valid excuse NOT to attempt to take the biblical exegesis test! To therefore invoke other 'books of antiquity' is irrelevant.

If then: you admit there existed Dead Sea Scrolls, Qumran scrolls, as well as proto- and deutero-canonical tests - then you have no excuse, NADA for evading the Loyola Univ. test.

I will even go you one better on this, to show how fair I am: You can take as long as you want to finish it, so long as you don't google.

I also will go even better than that, trusting you not to cheat, i.e. google. Why? Because I do believe that you believe you are a saved person on the blood of J.C. Hence, to 'cheat' would be to violate one of the Ten Commandments you hold dear. So, I trust you not to go that route, given to do so would amount to a repudiation of all your cherished beliefs. It would mean, in effect, you also have no respect for even fractional truths.

Again, this open invitation is merely to disclose for all of us here on Brane Space that you really do possess the biblical -exegetical erudition you claim.

We will have to interpret your continued refusal to even attempt the test - despite the breaks I've given - as prima facie evidence that you simply haven't the wherewithal to answer the questions in any intelligible fashion!

Should read: proto- and deutero-canonical TEXTS