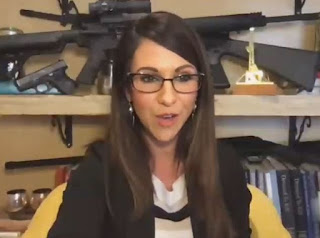 "It is unimaginable that we had somebody in the White House fueling these sentiments that the election was stolen.  Now we have individuals looking out for their own partisan, craven political interests, to try to tap into Trump's base for financing, for support.  And they continue to be dishonest with their constituents by lending credence to a lot of these conspiracy theories.

Again, these are individuals who don't put the interests of the country first and foremost. They're putting their own interests first and trying to capitalize on this wave Donald Trump had created and ride it to carry out their own personal agendas, irrespective of the impact on our national security.   Think of what we heard today that there was an active plot to blow up the Capitol of the United States government. That should send chills down the spine of every American."  - Former CIA Director John Brennan, today on 'Deadline White House'

In the time newly- elected high school dropout Lauren Boebert has been in congress, she's already received a warning from the D.C. police chief  for appearing to violate the city’s gun laws, used her first floor objection speech to cast doubt on the 2020 election, voted to overturn the results of that election, falsely claimed rioters at the U.S. Capitol were not conservatives, saw protests at all of her Colorado offices and was censored by Twitter for falsely accusing the Democratic National Committee of rigging elections.

This is the unhinged, semi-educated twerp that a subset of Colorado's more mentally challenged voters have succeeded in putting into the Capitol.  A human train wreck who even got shamed by a Republican colleague who criticized her for tweeting during the Capitol insurrection.

In the latest Boebert dustup, she appeared last Thursday in a House Zoom meeting with an array of weapons - includng AR-15s- as a backdrop. (See image)  Chris Hayes on ALL In, as well his two guests, wasted no time in tagging this dangerous dingbat with actually making overt threats.  As Hayes noted:  "She tweeted defiantly that her weapons were 'not in storage' but 'ready for use'. Apparently she leaves them out because she believes she may need to fire multiple rounds of ammo at someone who enters  her den."

Hayes expatiated on this defiant threat  -  comparing it to earlier similar images, e.g. of Osama bin Laden posing with multiple weapons behind him, as well - noting the underlying, unspoken meme is one of violence and insurrection.  In the case of Boebert and her gun-packing peers like Marjorie Taylor Greene, Hayes nailed it:

"A movement or faction that puts the celebration of guns front and center in its political aesthetic is a movement that's engaging in something other than the normal rhetoric of elected democratic politics.  Y9u can't escape the meaning of it. It communicates that they're committed to - or at least the possibility of - violent overthrow of the government and the existing order.

And now in the Republican party these images have become common and unremarkable.  Remember Marjorie Taylor Greene posed with this gun in her campaign ads, aiming it at four democratic members of congress: 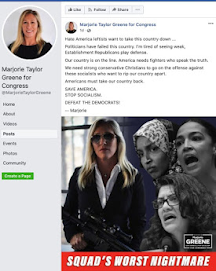 Her implied message seems to be, like Boebert's, is if you try to take away our guns we'll start shooting."

Not yet done with these two bimbo imps, Hayes then makes solid historical points re: the 2nd amendment and the GOP's fantasies of its reach, noting:

"Over decades the Right has built up this entire ideology around the second  amendment. Rooted in this ridiculous idea that the U.S. government itself denied itself  a monopoly on the legitimate use of force-  because the founders had gone through a revolution themselves.

History just doesn't bear that out, it's not true. Not now and not during the Whiskey Rebellion way back in 1794 when President George Washington got into his old uniform, got on  horse and sent in troops to violently suppress a violent tax protest.

Many Republicans are now signaling  they retain the right to use violence to overthrow the government at any time. That is actually the core of part of their political principles related to the second amendment.  And they're willing to brandish that claim as a threat in pursuit of their political aims.  And it's not just some abstract, academic thing.  Right now the threat of violence and menace hangs over our collective political life. From the Michigan state house last spring, invaded by men who planned to kidnap the governor, to the violent insurrectionists on January 6th.  Some of whom vowed to kill any lawmakers who wouldn't do their bidding."

In the same segment Hayes then asked his two guests - Shannon Watts and David Jolly - what the message was in Boebert's twisted image.  Watts wasted no time in saying the message is "Intimidation.  She's not saying these are here for my  freedom. NO, they are there to threaten our freedom.  And that's alarming because just over a month ago in the insurrection, they had enough weapons and ammo to shoot every member of the House and Senate five times."

Former Rep. David Jolly was even more blunt about Boebert's message, pointing out:

"What we're seeing with today's Republicans like Boebert is a direct correlation between the image and a target. With Majorie Taylor Greene it's the Squad, with Boebert its this defense against big government and on January 6th we saw a wllingness to tackle that government.  That is the danger of the Republican party in moving from the party of less government to one willing to undermine and kneecap the government - while leaders of the Republican party embrace this imagery of the second amendment.   That's why it's so dangerous because it gets us to a country where the Oklahoma City bombing happened."

So the message from Hayes and his guests is not that Boebert's image is innocuous - but that it's intended to send a serious,  dire threat, i.e. of future insurrections and violence if she and her cohort don't get their way. But how many are paying attention?

Moving on to a more prosaic incident,   Boebert’s campaign has publicly acknowledged that a prior campaign finance report — which raised ethical red flags and led to multiple requests for investigation — was inaccurate. Still, the campaign defended a large payment to the congresswoman.

On Feb. 2, The Denver Post reported that Boebert, a Republican from Silt, was paid more than $22,000 in mileage reimbursements from her campaign account.  For  freshman congress critter this is an unusually large amount that had several ethics experts raising questions. To fix ideas, to justify the reimbursement, Boebert would have had to drive 38,712 miles last year during a pandemic that limited travel for several months.  It simply doesn't add up.

Most of that money was paid on Nov. 11, when Boebert received $21,200 from her campaign coffers for mileage, according to her campaign’s original report, filed in December.

On Monday, Boebert’s campaign filed an amended report to the Federal Election Commission, reiterating that she received $21,200 on Nov. 11 but claiming it was a "reimbursement for mileage, travel expenses and hotel stays". Mileage accounted for $17,280 of the reimbursements, the campaign says.   Typical of her grandstanding spiel when opposing the states' certification of Biden's election win on January 6th, this time she had the following unctuous babble ready, in the wake of being caught out:

“I represent one of the largest districts in the country and was proud to have driven to every nook and cranny in it to help win my election,”

Well, yeah, but that's a lot of nooks and crannies, to rack up a distance almost one sixth of the distance to the Moon!

Boebert added:  “The reimbursement was for appropriate travel expenses, as reflected in the filing. We were happy to provide further detail. Nothing changes the reimbursable amount or the campaign’s operating expenses.”

Boebert called the controversy “much ado about nothing” and said it was generated by Reps. Ilhan Omar and Maxine Waters to distract.

In the weeks before amending her campaign finance report, Boebert tried various ways to defend her mileage reimbursements. She told radio station KHOW on Feb. 10 that she “absolutely” has documentation that showed she had driven the miles she was reimbursed for.  (Up to now she's not provided it.)

Michelle Kuppersmith, executive director of the watchdog group Campaign for Accountability, said Boebert’s amended report does not affect their FEC complaint that was filed Feb. 8, noting:

“These expenses should have been disclosed in her December 3, 2020, report. Either she didn’t keep the required mileage logs, or her treasurer didn’t ask for documentation before he reimbursed her for all of these expenses. The Boebert campaign has proven that its FEC reports are unreliable, so the FEC should properly audit the campaign to determine where else they may have failed to comply with the law.”

None of these miscues and misfires ought to be cause for astonishment, given this Glock-toting goofball's lack of professionalism.   After all we are dealing with a high school dropout who likely never took a senior year Government class.  Given this we ought not be amazed at the parade of Boebert's follies, foibles and misfires.  How should we say?  It comes with the 'territory'.   The terrifying part is that even a loser bimbo can be a useful idiot. A dangerous part of a dedicated agenda to destroy what's left of this nation by helping to sustain and spread Trump's scurrilous lies. 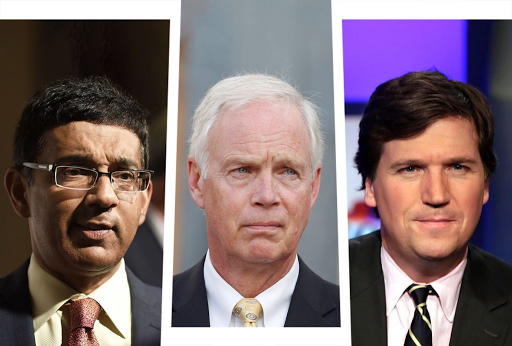