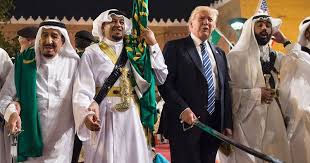 Trump -above- after Saudis delivered several lessons on how to do the "ardah". He still screwed it up.

"No, you asshole! You're doing it the wrong way!"

Many will likely recall how 7 years ago, Trump raked then President Barack Obama over the coals for "bowing" to foreign potentates. One is led to ask how hypocritical one has to be to do that, and then not only bow to the "supreme" Saudi leader but also curtsey, e.g.


then do a sword dance with this ilk, along with two members of his cabinet, Wilbur Ross and Rex Tillerson.  By all accounts in the Saudi-controlled media the trio yucked it up pretty good even as within hours Trump put the final touches on a wretched budget plan to reduce Medicaid spending by $800 billion, and also make food stamps cuts of at least 30 percent. Oh, and make those getting food stamps work. (Clue one: 95% of food stamp recipients already work.  It's just that they can't make ends meet with the jobs they have. Since nearly all the non-working food stamp beneficiaries are children, one guesses Trump and his cronies will make them work.)

The Trump supporters and voters need to take  note here, because it's estimated that up to 2 out of 5 of them depend on one or both of these programs. While they may firmly believe the current media firestorm over Trump's transgressions is fueled by media "hysteria", I can assure them that if the Trump budget passes they will experience hysteria first hand.

In his speech on Sunday,  Trump, as a guest of the Saudi monarch, spoke of a stronger alliance with mostly Sunni Muslim nations to fight terrorism and extremist ideology and to push back against Iran.  For reference, nearly all the 9/11 terrorists hailed from Saudi Arabia, whose Sunni monarchy controls Islam’s holiest sites. Ironically this bunch of freaks - recall ISIS is a Sunni entity too  -  sees itself as the natural leader of the Muslim world and has used its lavish oil wealth to spread its austere version of the faith.

Iran, meanwhile, was given short shrift by Trump, as he wailed about "terrorism" issuing from their faction of Islam. For reference, Iran is the world’s largest Shiite nation and is led by clerics who aspire to export the ideology of political Islam that brought them to power in 1979. But let us bear in mind, that ascension as well as the taking of hostages at the U.S. Embassy in Iran, didn't just occur spontaneously. It was decades building up based on U.S. meddling ending with the support of the brutal regime of the Shah of Iran.

For historical reference,  U.S. oil interests -   in collusion with the then CIA-   deposed Premier Mohammed Mossadegh in a coup d'etat via  in Operation TPAJAX.  His offense? He had sought to audit the books of the Anglo-Iranian Oil Company (AIOC), and implement new rules.  The eventual decision was to remove Mossadegh - the best chance at Iranian democracy.  So if Iran is "extremist" today we are the ones to blame, at least in terms of interfering in their then democratic processes by forcefully removing a head of state (like we did with Salvador Allende in Chile - except more violently in that case).

Meanwhile, three days ago, Frederic Wehrey, a senior fellow in the Middle East Program at the Carnegie Endowment for International Peace said:

The question is why did we pick the side that featured most of the vermin responsible for the most destructive attack on the nation in history?  Why also side with the nation with an embedded extremist strain (Wahabbi) that makes Iran's shortcoming pale in comparison?


The Smithsonian channel's documentary, 'Islam and the West', ought to be required viewing for every American and especially the hysterical subset that believes all Muslims are the next thing to demons. The documentary traces the origins of Islam from Mohammed and to the present day, including how none other than the Brits- in the latter days of their Empire - drew up all the boundaries in the Middle East including for Jordan, Syria, Iraq and Palestine - totally ignoring ethnic and tribal affiliations. Viewing this excellent program will indicate why Trump's siding with the Saudis is a grave mistake.

In the meantime, the spectacle of the Trumpite Trio dancing with the Saudis even as they put the finishing touches on budget plans to undermine many of their own supporters couldn't be lost on the astute observer. It was also jarring to see Trump cozying up to this authoritarian, extremist lot in the way he did though we've already beheld his fondness for strong men, e.g. in Erdogan of Turkey, and Duterte in the Philippines.