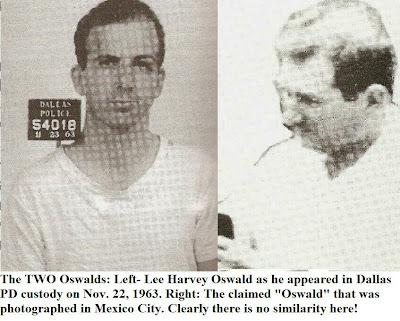 “As Lee Harvey Oswald was being set up as an individual scapegoat, so too was the Soviet Union, together with its less powerful ally, .” -
James Douglass, JFK and the Unspeakable, p. 277.

As we approach within a month of the 50th anniversary of the JFK assassination it is well to also focus attention on another assassination victim several days later: Lee Harvey Oswald, shot by Jack Ruby in the basement of the Dallas PD.

Millions, including me, watched horrified on the Sunday morning after Kennedy was killed as Oswald was shot down in cold blood. The first ever live televised murder.

Many of us smelled a rat even then, and as one of my math teachers said the next day in class: "Someone just saved the Dallas attorney's office a whole lot of money and the feds a whole lot of prosecution time and headaches."

But it goes beyond that, because the man never had a chance to defend himself against the fell and outrageous claims made against him in a court of law. His family was smeared from pillar to post by the scurrilous claims of a "deranged loner", so much so that Marina Oswald-Porter had to go into hiding with her two girls. Only years later did Marina begin to process - outside of the veil of fear (of deportation)-  how much she'd been manipulated at the time by the Warrenites.  By the time of her 1993 interview with Tom Brokaw she was no longer under any illusions regarding the bogus "lone nut" spell confected by Arlen Specter,  Gerald Ford and others - but had come to see how she had been exploited by an enclave of vermin to protect the actual perps. Brokaw, meanwhile, had been contaminated by lies, distortions and disinfo circulated in Gerald Posner's 'Case Closed' ( recycled more recently with Vince Bugliosi's ironically named  'Reclaiming History'). Those who wish to see the lowdown on Posner's shoddy work can go to this link:

But the questions that then arise are: 1) What prompted the lone nut assassin bunkum in the first place? And: 2) How is it that the narrative became so compellingly woven by the time of Oswald's arrest? We now know most of the sordid details and we have to thank deep politics expert and JFK assassination researcher Peter Dale Scott for exposing how Oswald was framed (by the CIA) in the months leading up to the assassination.

Most of this would never have become possible without the rush of documents accessible in the wake of passage of the JFK Records Act (spurred in large part by Oliver Stone's movie, 'JFK') . The release of so many critical files (now nearly slowed to a crawl since Bush  Jr. and Obama were elected) made it possible to ascertain the existence of  CIA (and other) secret files on Oswald and which were exposed in books like John Newman's 'Oswald and the CIA' and Peter Dale Scott's 'Deep Politics and the Death of JFK'.  In a 1995 essay in Deep Politics Quarterly, Scott also noted the stake Americans have "not just to learn about the government's secretiveness with respect to this one assassination" but to "create a precedent against the rule of secrecy that has so vitiated democracy in this country" since the end of WWII.

While there was an open window for critical and massive file access,  just after passage of the JFK Records Act (and following an Executive order) in Clinton's 2nd term, it slowed to a crawl once Bush Jr. was shoehorned into power then even more after 9/11 and the "war on terror". It was felt that rather than government transparency, secrecy was the order of the day and the less citizens knew about their gov't (and conversely the MORE the gov't knew about them) the better. Thus the spread of the NSA national security state, to the  insidious, monolithic beast Edward Snowden has revealed.

Despite the closure of the file release windows (the National Archives refuses to release many critical ones in this 50th marker year) Peter Dale Scott did unearth enough to expose how Lee Oswald was framed as the "lone assassin". In 1995,  Scott also advised us - based on these files- that 3 different stratagems needed to be distinguished by the researcher: 1) a sophisticated intelligence operation (or complex of operations), i.e. to frame Lee Oswald, 2) the conspiracy to kill the President and 3) the ensuing cover-up.

The problem is that all too often a lazy (or compromised) corporate media has never properly separated these stratagems. Indeed, in many cases they've ignored both (1) and (3) - the latter hardly surprising given "Operation Mockingbird"- and made fun of "tin foil hats" in (2).  Indeed, as Scott has observed, in the 30th anniversary year of 1993 - in the wake of "Posnermania" -  the corporate media simply trotted out the same recycled canards including that of a

"neurotic frustrated by neglect, and 'angered' (Posner's words) that 'others failed to recognize the stature he thought he deserved."

This codswallop was then additionally integrated into the CIA- confected narrative that Oswald was a "KGB -linked assassin"  hired to kill Kennedy. It was based on a supposed "Oswald" phone call to the Soviet Embassy in Mexico City with a KGB agent, Valeriy Kostikov. From this, and the visit of a fake Oswald to the Embassy (see the asset "masquerading" as Oswald in Mexico City in the photo above - right) a series of falsified cables was generated under the fake name "Lee Henry Oswald"* . These became part of a CI/SIG (Counter Intelligence Special Investigation Group) file on Oswald dating back to 1960, and as Scott notes, has their handiwork all over the false trail.  The purpose, as noted by Peter Dale Scott, was clear:

"to incriminate him falsely as an apparent KGB assassin"

While the "Oswald as KGB assassin"  ruse was never used  or published in its Report by the Warren Commission, "it almost certainly contributed to the Warren Commission's determination to close the case as the work of a lone assassin" (Scott, Deep Politics, 113)   This is actually validated and was foreseen when one examined a key paragraph in the Katzenbach memo which readers can see in full here: http://www.maryferrell.org/mffweb/archive/viewer/showDoc.do?absPageId=756877

"Speculation about Oswald's motivation ought to be cut off, and we should have some basis of rebutting thought that this was a Communist conspiracy".

When this is interpreted in the context of the rest of the memo, and especially Part (1) pertaining to convicting Oswald, it is clear the Commission was driven to the lone assassin bunkum as the only alternative to the KGB assassin hypothesis.

The surge to do this was reinforced after the Commission was informed  by CIA head Richard Helms** of the Kostikov -Department Thirteen connection ("Department Thirteen" was that KGB Section assigned to assassinations) . Earl Warren evidently became so spooked that he felt the only alternative to a possible nuclear  confrontation  was to find for the lone assassin theory. From then, all evidence, documents and tests became devoted to nailing Oswald as the lone perp. It was either that or find him a KGB- hired contract killer, which many (including LBJ) felt would have led to war.

The point was that the CIA had compiled such a compelling false narrative and guilt trail using phony cables, photos  phone calls etc. that the Commission bit into it hook, line and sinker and never remotely considered (or seriously considered) the alternative: that a right wing based- military- intelligence operation had targeted Kennedy. One that included powerful forces enraged at his backing down (from invasion) during the Cuban Missile Crisis, his removal of Gen. Edwin Walker from command, his intent to pull out of Vietnam and his efforts at rapprochement with Fidel Castro. More to come.
-------------------------------
Footnotes:

* Scott conjectures that the false name of  'Lee Henry Oswald'  may have been used to deceive investigators into Kennedy's killing. It may also have been what agent James Jesus Angleton called a 'marked card' operation in which falsified information 'like a  bent card' is passed through an intelligence channel to see where it ends up.