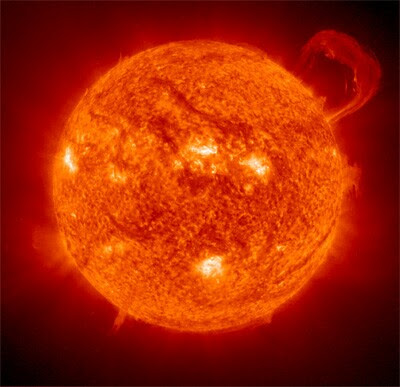 An eruptive flare prominence photographed two years ago, which was accompanied by a powerful CME.


As I noted in an earlier blog: http://brane-space.blogspot.com/2012/06/cme-that-you-dont-want-to-see.html

CMEs or coronal mass ejections, are not to be treated lightly. Powerful CMEs of such magnitude that they merit the name "Carrington events" and originate at the solar central meridian (relative to Earth observers) are events we wish to avoid.

But how? One method might be microwave bursts, radio spectrum energy signatures that tend to fluctuate before a CME spews out. DUuring intense solar activity observed in Oct.-Nov. 2003, Rodney V. Souza noticed that the Sun released microwave outbursts before each of 7 CMEs, out of 10 observed. (The other three coincided with the respective flare's eruptions from the solar surface. But for the other seven,  the microwave fluctuating bursts (fluctuating at seconds intervals) preceded the CME by 5-15 mins.  This admittedly is not a lot of time, but it's a start. Efforts are now being made to ascertain how often microwave bursts occur without a CME, which will provide crucial negative information to hone any predictions.

Let's also acknowledge that even a warning that comes minutes before CME eruption can help engineers prevent damage to satellites.

Another more theoretical, quantitative strategy revolves around the rate of increase of the poloidal magnetic flux associated with a flux "rope", e.g.

where the numerator denotes the increase in such flux and the derivative indicates it's taken instantaneously as a function of time. In a simple flux rope model, think of taking a 6-7 cm section of thin rope and twisting it. As you twist it the rope 'humps up'. In real solar cases the magnetic counterpart 'humps up' through the solar surface. It is the increase in the poloidal (as opposed to vertical or longitudinal) component which allows this.

For a predictive basis, one requires the related  function be adjusted for each CME to obtian a solution that best fits the observed time-height data. The function is usually given in terms of the electromotive force so that:


Hence, the preceding constitutes a prediction from the theory for each CME trajectory. This technique is what may be called a "theoretical forecast" compared to the empirical forecast described in terms of microwave bursts. Studies already done (e.g. The Astrophysical Journal, Vol. 717, p. 1105, by James Chen and Valbona Kunkel) show the best fit solutions fit the CME trajectories within 1-2% of the CME height data and the temporal profile of the predicted derivative for φ _p(t).

More work remains but both theoretical and empirical methods in tandem may give us our best shot at forecasting the next big CME.