How the U.S. Corporatocracy Fits in the Global Scheme 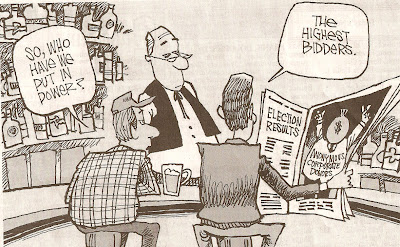 A pertinent question is: 'How does the U.S. Corporatocracy mesh with its global counterpart?' In fact, there are a number of ways.

a) The Federal Reserve Bank is part and parcel of the Unelected Central Bankers worldwide, and shares the same imperatives as its cousins in the Bundesbank, Bank of France, Bank of England and elsewhere.

b) Speculators and high power, high profile investors- such as George Koch and Rupert Murdoch – drive investment capital across borders to gamble in foreign currencies (speculate on them, e.g. the Thai baht) as well as drive worker-restructuring imperatives via ownership of shares in stocks, mutual funds (global funds) etc.

c) Multi-national corporations align with other multi-nationals and employ wage arbitrage and other methods, including the threat of lost capital, unless governments kowtow to their demands, i.e. in terms of gutting protective labor legislation, benefits, or corporate tax assessments (turning them instead into subsidies via corporate welfare).

An even more bothersome element, than any of the preceding, is the increasingly cozy relationship between U.S. government departments, agencies and the elite bastions of finance. Quoting Jerome Levinson, a professor of international law at American University (Mark Matthews, in The Baltimore Sun, p.24A, Dec. 27, 1998):

"U.S. policy and the people who make it are a very ingrown group." And they promote the free movement of capital above all else."

"a definite networking of like-minded luminaries among the powerful institutions - Wall Street, the Treasury Department, the State Department, the IMF and the World Bank most prominent among them."

"This powerful network..is unable to look much beyond the interests of Wall Street, which it equates with the good of the world."

"The magazine Institutional Investor tracked the eye-popping Washington -Wall Street traffic in 1996. It reported then that the number of former high level officials ensconced in financial houses had more than doubled since 1974."

"Former diplomats or people who were in government positions with global responsibility are attractive to any company with a global franchise."

In effect, we see the nexus of the U.S. and global Corporatocracy is facilitated, expedited not only by the intermixing of (central) bankers and business' interests, but with speculators (embodied in Wall Street) and from the halls of government as well. One is left to query to what degree this is, in fact, in the best interests of the majority of people, as opposed to a monied elite.

We've seen in this and previous blogs that the Corporatocracy at large exists worldwide, and is driven by the primary imperative to subjugate the interests and security of the majority of citizens to global capital. The result has been to create a de-humanizing atmosphere in which global capital is awarded an ever larger share of returns from production, and labor ever smaller. This is quickly resulting in a surplus production worldwide, in which there are too few consumers matched to the number and diversity of products produced. Unless this equation is soon altered, the world is looking at a major catastrophe of ecological and human proportions.

Clearly, higher wages, more quality jobs would solve the problem (by virtue of yielding greater purchasing power, lower debt)- but such largesse is not on the radar screen of the world's central banker elite. Instead, they are content to make do with a scheme that disproportionately rewards the speculator over the worker and genuine saver. Not surprisingly, personal -consumer debt continues to spiral out of control in the U.S. though true, some deleveraging has begun, which has shaken Wall Street's elites as much as Occupy Wall Street.

This again bears on reminding people where the real power against the fascist corporate state inheres: it is within the pocket book of each person! Withhold the money, the spending to support GDP and you withhold the life blood of Wall Street and its ravenous wolves, speculators. Meanwhile, playing the consumer game merely ensures higher debt levels and the the creation of only the most menial, service-commercial based jobs, with nothing of quality in sight. Hence, we must move away from consumerist-commercial society if we are ever to arrive at a high work quality culture, based on knowledge and artistic expression for the mass of people - rather than merely a few elites.

Meanwhile, in the rest of the world, enormous market pressures are under way to exact penalties on any remaining nations (such as Germany and Japan) which attempt to preserve social contracts, and enhanced quality of life for the majority of its people. These are now being pressed, from all directions, to "restructure" - which is to say, follow the American path to larger income inequity and loss of benefits, safety nets.

Can anything be done to control the wild global Corporatocracy from its most egregious excesses? Yes, but it requires national-political will- of a sort not witnessed since John F. Kennedy faced down hordes of Wall Street vipers and sharks 35 years ago, possibly losing his life as a result. Some urgent national -level steps that need to be taken:

1. Independently writing off, liquidating debt of poorer nations, e.g. for Haiti, and other nations that have suffered monumental disasters.

2. Imposing transaction taxes on all capital that crosses a national border, whether electronically or other. Impose yearly in situ taxes on all capital parked in a safe haven or country regarded as such. Fifty percent of all collected taxes to be earmarked for national health insurance plans to assist the uninsured, in the U.S..

3. Requiring all banks to have 100% reserves for deposits at all times, to prevent 'pyramid scheme' abominations like the 1997 hedge funds bailout of Long Term Capital Management, and the 2008-09 bailouts of investment banks that played Russian Roulette with investors' money using unregulated credit default swaps. Any bannks that don't cooperate, don't receive FDIC insurance protection. (Volcker rule)

4. Enacting protective labor legislation which shall be permanently immune to all future corporate or other pressures or blandishments. This to be expedited by the ability of workers to pull 401k monies from any corporate-backed mutual funds and place them in a workers' fund instead, as in Germany.

5. Using the United Nations , or similar global legislative body, to enact and decree one single standard for globally regulating labor and capital. (So that capital cannot flee without severe penalty if tries to go to a cheaper labor market, read: greener pastures). If all nations worldwide adhere to the same standards - to protect their people, then capital can have nowhere to flee to whereby it can leverage a race to the bottom.

Until governments cease shirking their responsibilities, and at least enact some of the above, the pace toward global ecological and sociological cataclysm will continue. Whether the Wall Street mavens and their dubious ilk can see it or not, the rest of us must, and need to be prepared for the coming consequences.
Posted by Copernicus at 1:30 PM