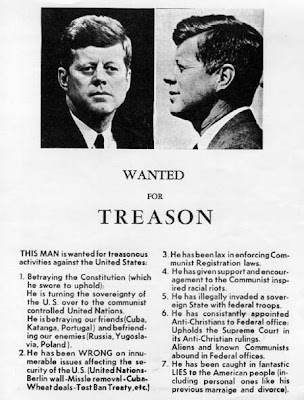 (ABOVE): One of the thousands of 'Wanted for Treason' posters distributed in Dallas on the day of Kennedy's assassination.


Having just finished the book, JFK and the Unspeakable, by James Douglass, I was left spellbound and moreover convinced that the JFK assassination case is a long way from closed. What Douglass has done is not merely compile facts from Freedom of Information released documents, but also - via extensive interviews and dredging up arcane government files- shown the moral tenor of Kennedy. He makes clear from the amassed evidence that by his second year JFK stood essentially alone with powerful forces arrayed against him. Forces that questioned every one of his moves....from challenging U.S. Steel (and even denying them defense contracts until they reduced steel prices as they'd originally promised), to opposing the Joint Chiefs in October, 1962 when they pushed for him to attack Cuba with nukes. We now know that no fewer than 95 IRBMs were targeted at U.S. east coast cities and would have been unleashed had JFK been so daft as to follow the Chiefs' advice.

Unfortunately, by standing up to those who advised and pressured him, Kennedy soon came to be viewed as a traitor. He was viewed as a traitor not just by his top military staff (especially after setting out NSAM-263 to pull out of Vietnam by 1965), but also by the CIA - which he threatened to "break into a thousand pieces" after they misled and misinformed him with the Bay of Pigs fiasco, also called 'the Cuba Project' - which had actually been implemented under Eisenhower.

The level and degree of distrust eventually mutated into hate, which could be seen on the streets of Dallas - even hours before JFK arrived at Love Field on Nov. 22, 1963. Shown in the figure, for example, is one of the ten thousand plus 'Wanted for Treason' posters that had been put up around that city. (Bear in mind at the time, Dallas was not only a hotbed of right wing hate and extremism - where Adlai Stevenson had been spit on merely a month before the JFK hit, but also the epicenter of the nexus of Big Oil and the military -industrial complex)
By all accounts, anyone with half a brain who had remotely been following events in Dallas over the previous years would have been appalled at the notion that a "lone nut commie" killed JFK. It simply didn't compute. Not then and not now.
Just days after Nov. 22, 1963, though the media were still rife with the planted ‘Oswaldian-lone nut’ myth of the assassination – a few courageous reporters got the word out about the real culprits: the radical right wing and its ‘better circle’ elitist enclaves. (cf. ‘The Enemies He Made’ in Newsweek, Dec. 2, 1963, p. 35, by Kenneth Crawford). At the time, however, most reporters couldn’t or wouldn’t see the suspicious irony inherent in a lone-pro-Castro gunman being fingered in a city (Dallas) regarded as a ‘citadel of right wing strength’. (cf. Newsweek, Dec. 2, 1963, p. 21)

Indeed, merely four weeks earlier Adlai Stevenson had gone to Dallas for a UN Day meeting, and was attacked – spit upon, and smashed over the head with placards by fulminating reactionary pickets (Newsweek, Dec. 2., 1963, p. 21). It was after that encounter that he warned JFK to reconsider his forthcoming trip.
What was peculiar about this once cow town that circulated ‘Wanted for Treason’ posters all over and in the newspapers, on the day of JFK’s visit? First, as Arthur Schlesinger notes, it was a nouveau riche city – fueled by East Texas oil. (‘A Thousand Days’, 1969, p. 1021, Houghton Mifflin) Second it was primarily white collar, so that unions were scarcely visible or manifest much power. Third, its citizens featured mostly fundamentalist religious backgrounds. Long on authority-regimentation-prejudice, short on any compassion. Fourth, it was a city of remarkably homogeneous tastes, attitudes and values. (Ibid.).
Schlesinger noted(ibid.,) that Dallas’s politics had been perpetuated "in a primitive and angry state" by its major newspaper, The Dallas Morning News. He also recounted how its publisher, two years earlier, had opined that what the nation required was a “man on horseback” as opposed to “a man on a tricycle”. (JFK was often captured by photographers playing with daughter Caroline). Thus, waves of right wing propaganda by this medium helped to fuel the fires of latent rage within Big D’s resident reactionaries.
Little wonder then that they ‘lost it’ when a liberal personage visited, as Adlai Stevenson did. In Dallas there also resided a powerful, right wing Oil tycoon by the name of Haroldson Lafayette Hunt who embodied its values of fierce self-styled individuality and hatred for any humanitarian role for the federal government. (He earned his rep in the 1950s via his radio program "Facts Forum")
Also rife in Big D were a number of fringe right extremist groups, including: The American Political Forum, The Ku Klux Klan, The John Birch Society, The Dallas Committee for Full Citizenship, The Texas White Citizens’ Council, The National States Rights Party and The Dallas White Citizens’ Council. The Left, or random commies, if ever present- would likely have met the same fate in Big D as integrationists met in Mississsippi.

Among the precepts all of these groups had in common at the time of JFK’s assassination:

My compliments. It takes hard work and countless hours of reading, and discarding the deliberate disinformation, to get at the truth. This can only be done by authentic patriots, not the mindless, flag-waving, morally bankrupt automatons who believe everything their military-industrial complex masters tell us. Your assessment of Posner is dead on. He comes to us as the latest in a long line of Operation Mockingbird assets.

Thanks, Tim! I became suspicious about the whole case after reading Gerald R. Ford's 'Portrait of the Assassin' back in 1966. What I recognized in that book was more or less a bookend to the whitewash of the Warren Commission Report.

Thus began a 40 year excursion into the nether realms of 1960s political assassinations, especially JFK's. What one ultimately learns is extremely unsavory.

As for Posner, I always suspected him of some kind of dalliance with the disinformation lot, posssibly spurred on by that CIA document endorsing discussions be undermined by "assets".

Re: Operation Mockingbird, what is your take on Vince Bugliosi, especially with his recent (2007) book: 'Reclaiming History:The Assassination of President John F. Kennedy'?

It is mind boggling that this guy who could be correct on so much (e.g. his take on Dubya Bush in his new book 'The Prosecution of George W. Bush for Murder', and earlier 'The Betrayal of America' could be so very wrong on the Kennedty assassination.

I can only surmise here that - if not an Operation Mockingbird lackey, he was at least very lazy in taking the easy way out, instead of digging much further.

Especially into the Oswald double that Douglass provided evidence for in his new book.