Why The Frackers' Language "Overhaul" Is Doomed To Fail 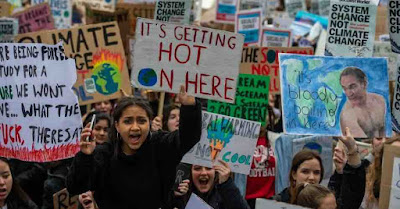 Today, as the global  climate strike revs up, it is well to consider the not insignificant role of fracking.  True, fracked shale oil is still a minor part of fossil fuel consumption but it has an outsized impact on the environment and public health. We've known this since the excellent two-part documentary ("Gasland")  by Josh Fox.  See e.g.

Less well known is that fracking - apart from wasting precious ground water reserves and contaminating the environment with fine particulates e.g.
has been a bottomless money pit for investors.  This is  given it takes more energy to generate a quantity of fracked shale oil than the extracted amount delivers.  Thus, the June article in The Wall Street Journal's Business and Finance Section (' Frackers Scrounge For Cash As Wall Street Shuts Spigot'', p. B1, June 7) didn't really astonish or surprise me.. Especially on reading:

"The companies behind the U.S. fracking boom are turning to asset sales, drilling partnerships and other alternative financing to supplement their cash flow. These forms of funding often come with higher interest rates or other downsides  - such as giving outside investors a hefty share of future oil and gas profits."

"Producers have been forced to get creative about financing because Wall Street began shutting off the cash spigot  last year after frackers routinely failed to turn a profit over the last decade."

Worse, only a tenth of large shale companies saw a positive cash flow in the first quarter of 2019.   This according to a Rystad  Energy analysis of 40  drillers.  To sustain  or increase their production these companies had to keep drilling new wells, as opposed to seeing greater production from each existing well .

The piece also noted some companies had become so desperate for cash to jump start new wells that they turned to junk bonds.  The central question emerged:  Why have the frackers - who seemed to be all over the place -- failed to turn a profit over a decade?

I explained this in earlier posts in terms of the lower energy returned on energy invested (EROEI) say compared with the light  crude oil of the past, non-shale based. I also pointed out the difference in EROEI translated into some bad economics given the lower energy content of shale oil (kerogen) meant the frackers would always be in "catch up" mode so struggling in an energy (and hence economic)  hole.  A less efficient energy source means you have to extract more of it, and at ever higher costs given the innate diminishing returns. (According to the Federal Reserve Bank of Dallas in a report issued as recently as May 31::"The average breakeven price of oil has fallen 4 percent (or $2 per barrel) over the past year, to $50 per barrel, according to the latest Dallas Fed Energy Survey." )

The entire issue of sinking oil shale fortunes pivots on the breakeven price: that amount which the recovered oil needs to earn to have made its extraction worthwhile  If that per barrel amount tends to be below what the market offers, a loss occurs and over years the losses pile up. In many cases, as seen in recent years there is the added factor of an oil glut from over production.  In this case one has an excess supply and so oil prices tend to plummet creating a bigger financial hole for an already marginal operation.

The issue first surfaced some six years ago in Richard Heinberg's book, Snake Oil: How Fracking's False Promise Imperils Our Future', ( p.115).   Therein we learned from a report by a London -based brokerage firm,  Tullett Prebon:

Now we flash forward to a WSJ Business & Finance piece from Sept. 10  (p. B1):  'Fracking Lingo Gets An Overhaul' where we learn that:   "Frackers are changing how they talk and how they drill to show they can live within their means."   The problem is that  changing the language doesn't really address the core problem: The low EROEI of shale oil which makes it a fundamentally inefficient mode of oil extraction and use.  But what language overhauls are we talking about?  Some examples from the piece:

1) "Where once top shale executives promised to 'ramp up/ production, these days they are more likely to assure investors they can deliver 'free cash flow'."


According to the article this is "the trendiest term in the industry right now".  It has become synonymous with the promise "not to spend beyond their income and to then generate profits which can be returned to investors."

So, in other words, the execs are promising to lowball the costs of their fracking operations because they can't deliver the fracked oil at the price needed for investors to make a buck.. So the interpretation seems to be forget "production growth" and instead look to "discipline" - meaning the frackers will cut more corners to try to ensure costs of extracting the stuff are within bounds.  But this is impossible if the shale oil itself is of such low grade in terms of EROEI.  After all (ibid.)

Again, WHY is this? Well, it's because it costs MORE to extract a barrel of shale oil than $60 a barrel. So  at that price it's a breakeven world and  below that price it's a LOSS.  If companies have YET to show they can live within their means then they never will unless oil prices spike much much higher.  The EROEI of shale is simply too low compared to light sweet crude to support its consistent profitable production.  Hence, no surprise that "shale stocks have hit historic lows with many companies all but cut off from capital markets and many filing for bankruptcy protection."

In other words, the classic losing operation, or "batting on a losing wicket" in Bajan parlance

2) The frackers promised investors they would "downspace" the wells , i.e. move them more closely. In this case, the frackers claimed "they could boost production by placing wells in closer proximity".

However, .they  found "doing so meant the wells produced less as they draw down the same resources".

Quick to parse the lingo, the industry called it the "Parent-child well problem"   but I call it the "not enough shale energy to go around" problem."  Obviously if two wells are placed closer together and the extracted oil from the combo is less than expected it means there wasn't enough there to supply 2 wells to begin with.   Or to put it another way: the energy returned from the two wells is still too low to make a profit because the oil extraction process itself is too inefficient to support the cost. Because the shale itself (kerogen) is too unprofitable.

Supporting this thesis is the revelation (ibid.) that:  "as financing dries up many companies are retreating to the sweetest spots in the best basins and shutting down drilling elsewhere."  Again, why is that being done?  It's because the frackers - with so little capital to work with on account of the oil price being too low, e..g.  to make it profitable -  have to go to the most productive basins to even break even.  Hell, and "even stalwart fields where the shale boom began, including North Dakota's Bakken, are declining in popularity with drillers."  Why?   Because it takes more energy and effort to snag the few barrels left than the barrels are worth!  The amount of energy processing for kerogen, given its cost, is simply too much for the quality of energy resulting.

"Kerogen is not oil. It is better thought of as an oil precursor that was insufficiently cooked by geologic processes. If we want to turn it into oil, we have to finish the process nature started: that involves heating the kerogen to a high temperature for a long time. And that in turn takes energy- lots of it, whether supplied by hydroelectricity, nuclear power plants, natural gas, or the kerogen itself. "

Oil shale fracking is a symptom of diminishing quality supplies of oil, that of high EROEI (energy returned on energy invested) not oil abundance. Anyone with half a brain would know that, which is why Heinberg  refers to it as "snake oil". It simply can't deliver the energy solution promised and in fact its continued use will result in ever lower quotas of useful energy- at ever higher cost.

While we're on the topic of fossil fuel production and global climate issues, let's bear in mind the Dems are not all pure as driven snow in regard to fossil fuel impacts, campaign cash flows etc.. (At least they seem to be better  in comparison to the climate change denying Reeps.)  On Wednesday, the 103-member New Democrat Coalition saw its Pac BP, ExxonMobil and the Edison Electric Institute all max out on donations to this year –then  outline a series of incremental and “pro-market” steps to curb carbon emissions.

A suite of legislation unveiled on Wednesday would do many great things, like investing in clean energy research and development via ARPA-E and limiting emissions of methane, a potent greenhouse gas. It is not, however, a plan for fulfilling the challenge laid out by the IPCC, leaving the door open to define coal as a potential source of “clean energy” in pursuit of a “technology-neutral, market-oriented standard for electric energy generation” and providing a financial incentive for fossil fuel companies to capture carbon dioxide and funnel it back into pumping out more fossil fuels.

Those who want to access all 340 pages of the 'Climate Deception Dossiers' can go here:


It’s Time to Strike for the Climate


The Climate Crisis Means the Wrong People Are Running the World


We Have a Decision to Make. Change the System or Face Climate Catastrophe.
Posted by Copernicus at 7:05 AM