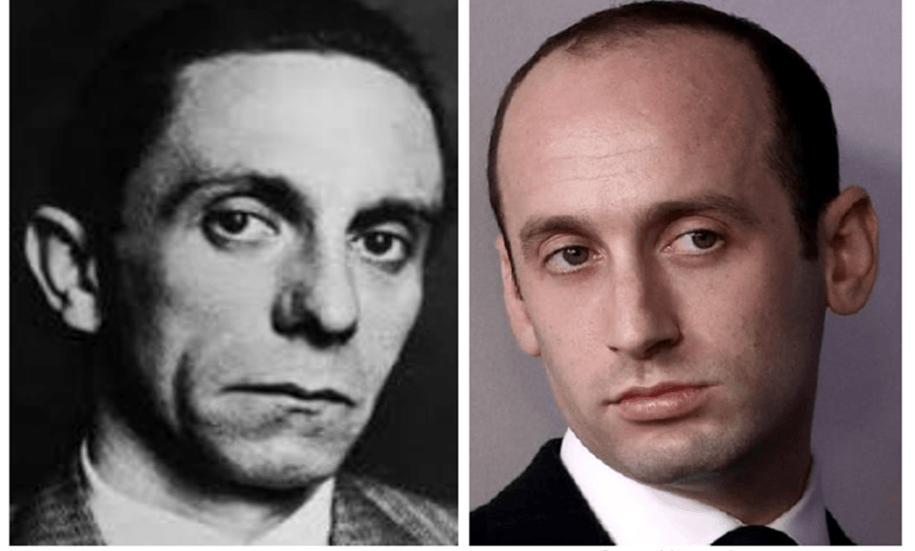 The Nazi responsible for the child separation actions, including deportation of sick children: Stephen Miller, the reincarnation of Joseph Goebbels


"So we recently learned that Stephen Miller is the point person for much of the Trump administration's dehumanizing policies and actions against immigrants.  Now the administration wants to deport a small number of immigrants with significant medical conditions, but already granted temporary status.   It is likely Miller also suggested this.  I don't recall anyone voting for this person.

How do his far right radical ideas get to become aw and policy without the American public authorizing this joker to do this?    These actions are so far from what our country has always stood for."-   Letter writer H. Ramirez, Denver Post today, p. 21A

"This is just not America, to send a sick kid off to die."   Sen. Amy Klobuchar, last night on MSNBC 'Last Word'

Unless one has been living under a rock he or she is aware of the Trumpies' fell plan to deport sick immigrant kids, risking their health, and even lives.  We also know, after an outpouring of outrage Trump had to walk back this sick plan, which most savvy in deep politics know was hatched by his top Nazi, Stephen Miller. Miller can best be described as a pustulating putrescence  on the Oval Office and the entire Trump white nationalist administration.  Indeed, the power wielded by this maggot in an unelected position - as per the Denver Post letter writer's observation -  screams 'white nationalism' from the proverbial rafters.

Strangely, or maybe not, we learned of this nefarious and fascist effort through the media back channels, not directly.  For example,  the USCIS (U.S. Citizenship and Immigration Services )  did not announce the sudden cancellation of the program allowing sick immigrant kids to stay on a temporary basis (Medical Deferred Action Program) . The decision only became public after Boston National Public Radio station WBUR reached out to the agency about letters denying medical deferrals to children with cancer, cystic fibrosis, cerebral palsy, and HIV.

Understandably, the rollback has been widely condemned by all decent  lawmakers, immigration advocates, and attorneys as targeting the most vulnerable immigrants, almost all of whom entered the country legally to seek medical  treatment.  In the words of Sen. Ed Markey (D-Mass), who joined other Massachusetts politicians at a Monday press conference denouncing USCIS’s decision.

“Kids with cancer, cystic fibrosis, and muscular dystrophy are now being told that they must leave the country or be put in the hands of ICE. These patients could be facing a de facto death sentence,”

Markey added, while noting that USCIS was “too ashamed” to publicly announce the policy change until inquiries from the press:

“This is a new low, even for Donald Trump. This administration is now literally deporting kids with cancer.”

But let's understand that as putrescent an entity as Trump is - and indeed I've described him as a "pestilence"-  it pales beside Miller who has fed these debased schemes nonstop to Trump.  Lacking any will power or moral compass as a leader, Dotard has simply reactively enacted them by fiat, including when immigrant kids were being put into cages last year.  And earlier this year when immigrant men were being packed cheek to jowl into caged pens in overcrowded border facilities.  The very existence of Miller shows in itself that neither humanity or decency be assumed  nor can it be imparted if one only has the DNA of a rat or cockroach.

Miller's earlier horrific policies - carried out by his personal bitch Trump - had  allowed the vile separation of migrant  kids from their parents with each dispatched to separate detention facilities. For the kids, we saw the horrific images and scenes play out as they were summarily ripped from parents' arms and sent off, terrified - in some cases to tent cities, and in others to prisons 1,000 miles away.  Finally ending up, many of them, in cages that spurred national outrage.

The scenes at the time reminded me of how the Nazi S.S. split up families soon after they arrived by train to Auschwitz and Bergen-Belsen, as portrayed in the docudrama 'War and Remembrance' - and which noted historians (e.g. Gerhard Weinberg)  commenting on the series at the time, insisted held true to history.

As for Herr Miller, we already know he is the spitting image of Nazi propaganda minister, Joseph Goebbels, And is also the one who advocates Goebbels' use of the big lie, i.e.

"Make the lie big but keep it simple. Keep saying it and eventually they will believe it."

Clearly Traitor Trump has followed  Goebbels-Miller's dictums to perfection.  Thus, in the ghastly midst of the child separations and caging Trump had repeated numerous times his false assertion that Democrats were responsible for his administration’s policy of separating migrant families apprehended at the border.  I.e. "Obama was the one who caged those migrant kids!"

Thereby, this odious toad had adhered to a continuing refusal to publicly accept responsibility for a widely condemned practice that had become a symbol of his crackdown on illegal immigration. Spluttering in a morning post on Twitter.


“Democrats can fix their forced family breakup at the Border by working with Republicans on new legislation, for a change!”

This B.S. came the day after his administration admitted that it had taken nearly 2,000 children away from their parents in a six-week period as part of a new “zero tolerance” policy that refers for criminal prosecution all immigrants apprehended crossing the border without authorization.  That they could commit such a Nazified, fascist move presaged their recent venomous actions to deport sick immigrant kids. In other words, it's all of the same pattern, and doesn't require a Mensa level IQ to parse it, or figure it out.