Can We Please Leave Jesus Out Of NFL Football Games? 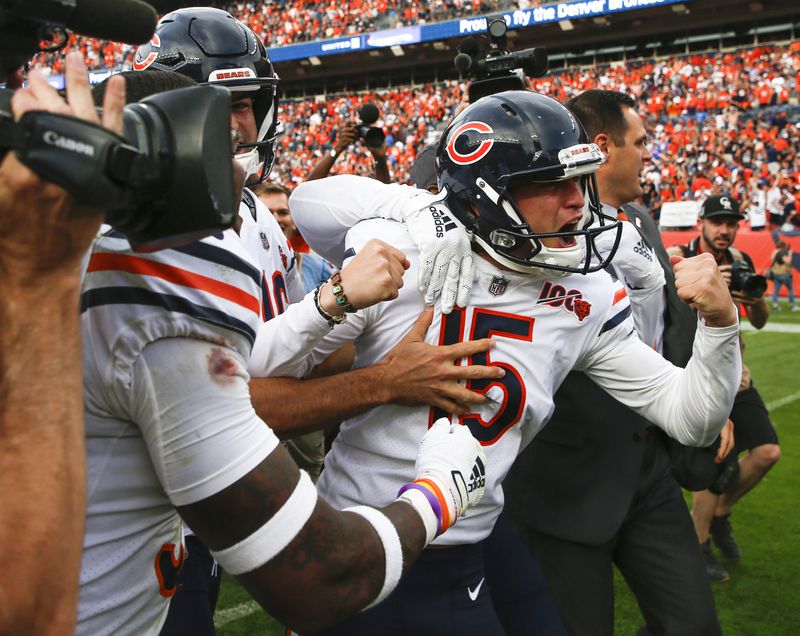 Eddy Piniero - brain charged by adrenalin after Sunday's win over Denver, demands Jesus be treated as real.  Whereupon the obliging atheist must ask:  What does Jesus' reality have to do with an NFL play or game?


If you watched the end of the Bears @ Broncos game Sunday afternoon you saw one of the strangest endings, but which The Denver Post sports section announced with the headline (p. 1B today) : UN-BEAR-ABLE! . Denver had just scored a TD with less than minute left and then after two penalties (one for negative yardage the other positive) set up a two point conversion play on the Bear 2-yard line. The score was 13-12 after the TD.  Broncos' coach Vic Fango preferred to go for the win and not the tie.  The play worked with a shot from QB Flacco to receiver Sanders.  Broncomaniacs went nuts in jubilation given they had a 14-12 lead, what ought to have been enough for their home opener first W of the season.  Plus there were only 31 ticks left. No way the Bears could pull this out, or could they?

Well thanks to an iffy "roughing the passer" penalty against the Broncos' Bradley Chubb, the Bears got to a decent field position. Then with 17 ticks left and one timeout Bears QB Mitch Trubisky - facing a 4th and 15-  let fly a 16 yd. over the middle pass to receiver Robinson.  The play seemed to swallow up all the time remaining and the clock showed: 00:00 at the end of it.  But hold strain, Bears coach Matt Nagy had been riding one of the Zebras to ensure if he tossed the time out flag it'd be seen, not ignored. It worked, and the clock was reset to :01.  One measly second left, but enough for FG kicker Eddy Piniero to try to get the win with a 53 yarder. (Recall this is the same guy who doinked an attempted game winner during the playoffs last year)..

The rest, as they say,  was history.

Piniero's effort marked was the longest field goal to win a game for the Bears (on the final snap) since Paul Edinger hit a 48-yarder for a 24-21 victory over the Raiders on Oct. 5, 2003 at Soldier Field. Pineiro's kick spared Da the Bears from having to return  home 0-2, something that would have cast a black cloud over a season that began with such high hopes two weeks ago.  Wore, the Bears' long suffering fans have already been suffering extreme paranoia and fear on any FGs since Piniero's 'doink' miss in the playoffs last year.

But the Chicago fans ought to relax. Piniero is on target  to be named the NFC special teams player of the week. He’s 4-for-4 now on field goals and made the only extra point he’s attempted. This is how the Bears went from thinking they could believe in Pineiro,  for whom they traded a conditional 2021 seventh-round pick to the Raiders, to actually believing in him.


"I was just hitting some kicks into the net.  Coach Tabor was just telling me, ‘Get an easy swing in,’ this and that. I go, ‘Coach, I got you. This one’s for you.’ Just went out there and hit my kick, you know.”

Q.  Why did Pineiro tell Tabor the kick was for him?

“For all the things he has been through, the coaching staff’s been through.  The whole kicking situation. It was pretty cool.”

So far, so good.  Then possibly under the conditions of extreme euphoria combined with the adrenalin still pumping through his veins, he yelped:

“The biggest thing  I can say now is if you don’t believe in Jesus Christ, you better start.  Because he’s real.”

Ok, Eddy, but what does "belief in Jesus Christ" have to do with the price of tea- or in this case the outcome of a football game?  Or even your 53 yard field goal?   Do you have any grasp at all of how nonsensical that sounds?  And whether J.C. being "real" or not was irrelevant to your FG?   Can you say non sequitur?

Had you failed would you still have made such a proclamation on national TV?  I doubt it because I heard no such thing after your doink FG flub in the playoffs last year.

Indeed,  the reality of Jesus - or Yeshua - isn't really open to that much debate, even by atheists. That such a man walked the earth has been well documented by John Dominic Crossan. He laid out a  compelling case in his 400+ page monograph: The Historical Jesus: The Life of a Mediterranean Jewish Peasant'.

A formidable problem in researching and writing about historical personages, is that myth often becomes conflated with facts. This is especially true when the research entails exhaustive dredging up of numerous obscure scrolls, manuscripts- not to mention cross checking of sources.That is why  Crossan's book is all the more remarkable. It shines out like a beacon, against a morass of many other comparable books with far less scholarly qualities.

His conclusion: Jesus was a "peasant Jewish Cynic"

As Crossan points out, p. 421, a 'Cynic' embodied "a life-style and mindset in opposition to the cultural heart of Mediterranean civilization, a way of looking and dressing, of eating and living and relating, that announced its contempt for honor and shame, for patronage and clientage. ....Hippies in a world of Augustan yuppies."

Like biblical scholar Geza Vermes, Crossan rejects implicitly the facile explanation that Jesus (Yeshua) claimed to be a unique Son of God who "exercised divine powers".  Those words and claims were added later, most of the additions from bastardizations of the Latin Vulgate in its transcription to the King James Bible - which is probably the worst version of the bible available- though it reads the best!

My best advice to Eddy Piniero and other NFL players who've invoked Jesus after plays?  Get hold of Crossan's (or Vermes) books and read with an eye to enhancing your critical thinking.  You also might wish to check out Bart Ehrman's book 'Misquoting Jesus'.

Don't have the time to read a serious book on biblical exegesis?  Then go to this 5 minute video:  Crossan on Christian Fundamentalists:
http://www.youtube.com/watch?v=6f0ZHaoSnf0

Oh, and in the meantime stop calling down Jesus's  name during (or after) contests featuring the most savage sport on the planet!
Posted by Copernicus at 1:40 PM