Are English & Fine Arts Majors "Worth It"? Yes, If Your Aptitude Is Confined To Those Areas 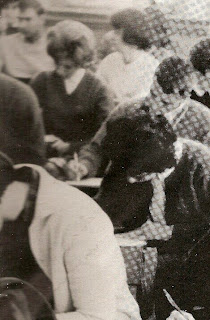 
Once again we have another 'cart before the horse' op-ed column by William McGurn ('Is Majoring English Worth It?' WSJ, Sept. 10, p. A13)  where the Journal's resident curmudgeon scribbles:

"If you're a parent going into hock to pay for your son or daughter's degree in English you might be feeling a mite anxious about what you are getting for all those (tuition) dollars?"

He goes on to cite the not so great stats on such majors:

"A just-released Bankrate study won't make you feel any better.  In a ranking of 162 college majors by median income and unemployment rate, English majors landed among the bottom dwellers, at 132.  At $47, 800 in median income, they did better than those in drama ($35,500) or fine arts ($37,000), but they earned less than half as much as those who majored in electrical engineering ($99,000)"

Which totally misses the point because it assumes those English majors just selected their studies out of a whim. Not appreciating they may well have done so because they realized they didn't have the aptitude for electrical engineering (or any engineering).  A good indicator? They perhaps got a 700 in the English section of the SAT and only 490 in the math.  SO, to use an old cliche, why would you try to squeeze this round peg into a square hole?

Maybe what eludes McGurn is that those English (and Fine Arts) majors know in their heart of hearts if they selected the clearly more remunerative electrical engineering (or petroleum engineering) they'd just flunk out. Period.

Now it is true, as McGurn goes on to note, that the cachet of the major itself has taken a hit as it's been diluted and dumbed down. So where once the concentration was on  analyzing the works of Milton, Chaucer, Shakespeare, Shelley, Byron et al, the English (and Philosophy)  major has now been "infected" by the works of Herbert Marcuse, or worse, Jacques Derrida. Derrida, for those unaware, was the creator of the nonsense called "deconstructionism" which encouraged assorted twerps in Ivy League (and other) universities to embrace full- on relativism in meaning and communication to impart....well, balderdash. They even attempted to extend this gibberish to scientific areas.

Contrast that from when I took the perfunctory (common core)  English Lit course at Loyola in 1964- 65.   The course consisted of a survey reading of Chaucer's 'Canterbury Tales' as well as Dryden's poetry and some Shakespeare ('King Lear',  'Hamlet') - with interpretations, discussions.  In my (core) Philosophy course, the concentration was on Aristotle ('Politics', 'The Nicomachean Ethics')  as well as Plato ('The Republic') .  Philosophy majors (I was a chemistry major at the time)  delved into much more classical philosophy (incl. Aquinas 'Summa Theologica')  and no 20th century contributor was pursued. That's how it was and no surprise Loyola philosophy grads were able to write and think clearly - as opposed to emulating clowns and poseurs.

My personal introduction to Derridian madness was incepted by having to argue with his assorted deconstructionist disciples on the AOL forums , ca. 1993. They had  claimed "No REAL Humans were killed at Hiroshima and Nagasaki" only "mental constructions of humans, since the A-bomb was a mental construction of a real bomb". Of course, if NO real humans were killed and they view even an A-bomb as an abstraction, they'd have no qualms about carrying out any kind of killing themselves! Indeed, they'd regard any bombs or other weapons they use as "mental constructions"!
This sort of (literally) insane moral "argument" paves the way to moral chaos and insanity since it seeks to conflate  the objective realm with the internal, subjective one.  Thus, what is embedded in the (Derridian's) head  becomes conflated with the outside world- thereby trivializing the latter as mere "epiphenomena". People then cease to be authentic beings and emerge more as virtual-digital avatars - to be wiped out as if from a mouse click. At least one serial killer, I believe the "Green River killer", actually invoked Derridianism as an excuse for his crimes if memory serves.

So, to quote Jonathan Pidluzny - Director of Academic Affairs for the American Council of Trustees and Alumni (whom McBurn cites):

"The English major was once a guarantor of effective, formal , writing skills and the ability to comprehend and analyze the complex thoughts found within centuries of brilliant and challenging poetry and prose."

But now it's mainly dedicated to the subjective bollocks of Derrida and Marcuse, while exposure to the classic works - such as Milton's Paradise Lost-  is uh, lost.  As McGurn so colorfully puts it (ibid.):

Or, his philosophy degree.   To McGurn's credit he makes clear that "it isn't that STEM subjects are the only subjects worth anything", but rather the humanities have been "infected" with too much ambiguous balderdash - from the likes of Marcuse, Derrida and company.

Pidluzny, for his part, reduces the problem mainly to one of lost rigor.  So a humanities major "still rooted in a rigorous core curriculum still provides value".  But when its core veers off into the nebulous realm of opinionating on the subjective meaning of language or relativism all bets are off.

The question then emerges as to why the sciences have kept their integrity while the humanities (for the most part) haven't.  Well, in the words of Pidluzny:

"The university can't get away without teaching engineering students differential equations because we'd have collapsing bridges all over the place".

(Side note: We do have collapsing bridges all over but that's not because of the lack of DEs being taught in engineering courses but because we have not reinvested in our existing infrastructure.)

Sounding his final note on the issue Pidluzny says:

"But for an English major who studies Harry Potter instead of Chaucer, or spends his time on gender theory instead of reading great literature, the costs aren't as obvious - except to the graduate who only later realizes he never developed the keen analytical mind and precise style of writing college was supposed to cultivate."


So true. But in an era in which universities are more invested in grabbing money by jazzing up enrollment - often by allowing rampant grade inflation - this is what it's come to: debased studies lacking any rigor and zero critical thinking.

But, should the student stuck in a major (or course sequence) without rigor then opt to join the STEM curriculum?  Again, not unless that student has an aptitude for the subjects that curriculum entails, including: classical mechanics, dynamics,  calculus, linear algebra and likely differential equations and complex analysis.  Else, it is a route to frustration and failure, not enhanced earning power.

Finally, it is well to bear in mind the words Dr. Steve Mason wrote in an Integra article  ('The Myth of Higher Education') some years ago:

"The bottom line regarding a well -rounded education is that it has nothing to do with any kind of bottom line. Its value (non-monetary) is to be found in the quality it adds to one's life. It allows one to better appreciate music, art, history and literature.
It contributes to a better understanding of language and culture, nature and philosophy. It expands rather than limits horizons and replaces faith and belief with reason and logic."

The takeaway? Even if your college isn't in the habit of emphasizing reason and logic over "faith" in bunkum, you need to ensure you develop those attributes yourself.  This should be irrespective of whatever the major chosen. That includes a much more generous appreciation of the (classical)  humanities than standard (non-liberal arts inputs) STEM tracks -   or dumbed down current humanities' courses-   allow.
Posted by Copernicus at 7:01 AM