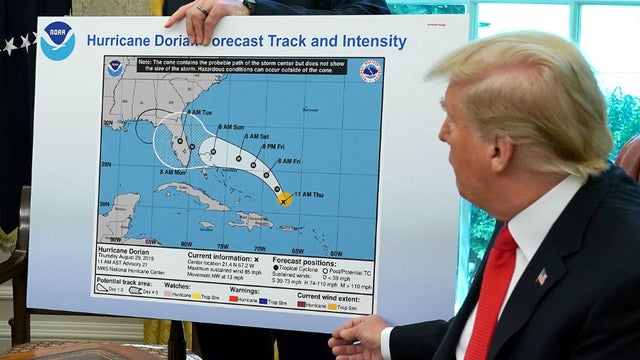 Trump bloviating about the fake hurricane threat to Alabama a week ago, slapped down by Birmingham National Weather Service office but supported by an "unnamed" NOAA official.

In its heyday.  the National Oceanic and Atmospheric Administration (NOAA) was one of the most reliable and trustworthy science-based agencies,but evidently no longer. Not after publicly coming out in support of Donnie Dotard's fake threat (by Hurricane Dorian) to Alabama.  As noted by Bloomberg News:

"During a briefing on the storm’s threat to the U.S. East Coast, the president held up an Aug. 29 map from the National Weather Service showing initial projections of Dorian’s track into Florida. But the map had been changed -- by the president -- with a black line that extended the storm’s path beyond Florida and into southern Alabama, according to people familiar with the matter."

The story goes on to note:

"Trump repeatedly claimed on Sunday that Alabama was in Dorian’s path -- he tweeted it, repeated it at the White House, and said it again during a visit to the Federal Emergency Management Agency. But by then, the storm’s track had turned decidedly north and east.

The National Weather Service’s Birmingham office said in a tweet on Sunday that “no impacts from Hurricane Dorian will be felt across Alabama.” Trump nonetheless said his warning had been accurate."
We've since learned (WaPo, yesterday) that a week before the NOAA publicly backed Trump over its own scientists, and a top NOAA official warned its staff against "contradicting the president."   Contradicting Donnie Dotard? How about contradicting physical reality?

In an agencywide directive sent Sept. 1 to National Weather Service personnel, hours after Trump asserted, with no evidence, that Alabama “would most likely be hit (much) harder than anticipated,” staff was told to “only stick with official National Hurricane Center forecasts if questions arise from some national level social media posts which hit the news this afternoon.”
They were also told not to “provide any opinion,” according to a copy of the email obtained by The Washington Post.

'A NOAA meteorologist who spoke on the condition of anonymity for fear of retribution said the note, understood internally to be referring to Trump, came after the National Weather Service office in Birmingham contradicted Trump by tweeting Alabama would “NOT see any impacts from the hurricane.”

"The agency sent a similar message warning scientists and meteorologists not to speak out on Sept. 4, after Trump showed a hurricane map from Aug. 29 modified with a hand-drawn, half-circle in black Sharpie around Alabama."

"Late Friday afternoon, NOAA officials further angered scientists within and beyond the agency by releasing a statement, attributed to an unnamed agency spokesperson, supporting Trump’s claims on Alabama and chastising the agency’s Birmingham meteorologists for speaking in absolutes.

That statement set off a firestorm among scientists, who attacked NOAA officials for bending to Trump’s will."

At that point, the NOAA  ceased to  be a reputable federal scientific agency, and became another rubber stamp farce for Dotard- much like the EPA, and the DOJ.  Essentially, it  lost any shred of credibility, gravitas and independence.  Rather it had mutated into a disreputable arm of Trumpdom - as has the EPA, the DOJ, and other once proud federal institutions.  As the Post went on to warn:

"The firestorm surrounding the president’s hurricane statements is unprecedented in the organization’s history, and threatens to politicize something that most Americans take for granted as an objective, if flawed, part of daily life: the weather forecast"

So yet another branch of the government has been dragged into Trump's vile, contaminated orbit.

Michael Halpern, deputy director of the Union of Concerned Scientists - an organization to which I also belong, said;

"It makes me speechless that the leadership would put Trump's feelings and ego ahead of putting out accurate weather information. If we're politicizing the weather what is there left to politicize?   We're seeing this kind of clapdown on scientists across the government  and  it's been an escalating trend."

Kathryn Sullivan, a former NASA astronaut who ran NOAA under Obama, didn't mince words in her assessment of the latest incarnation of the agency, telling the Post in an earlier (Saturday) article, 'Stormy Response To NOAA Stance':

Jane Lubchenco, who preceded Sullivan as head of NOAA told the Post in an email (ibid.):

"This looks like classic politically motivated obfuscation to justify inaccurate statements made by the boss.  It is truly sad to see political appointees undermining the superb, lifesaving work of NOAA's talented and dedicated career servants."

Meanwhile, David Titley, an atmospheric scientist who served at NOAA during the Obama years tweeted - after reviewing the NOAA defense of Trump statement:

"Perhaps the darkest day ever for leadership. Don't know how they will ever look their workforce in the eye again. Moral cowardice."

But let's take a step back and observe again this isn't the only federal agency or arm being fouled and discredited by Trump political appointees heading a service or agency.  When Joy Reed asked her assembled panel ('AM Joy') on Saturday how it could be that now the military is abetting Trump, i.e. in enriching his hotels,  Malcolm Nance delivered a robust answer: "It's not actually any generals, who despise Trump, but the political creatures appointed by Trump and able to pull select strings".  In this case, ensuring that a C-17 crew back in March ended up staying at his Turnberry, Scotland resort for a mission in March. And oh, by the way - as Joy noted- overpaying for the privilege.

But again "official Air Force" personnel insisted the crews were following strict protocol.  Which, of course, is balderdash.  There is no known protocol which says or stipulates an AF crew must stay at a given president's resort and overpay to enrich that resident  - thereby flouting the domestic emoluments clause.  But this is now the deformed universe under Trumpism.  It is yet another reason that Trump must be dumped next year, irrespective of whom the Democratic candidate may be.