Partisanship and the Brain: Why We Can't Get the Righties to Accept Global Warming or Evolution 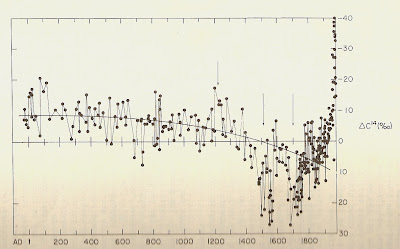 Yale professor Dan Kahan's research discloses that a graph of C-14 excess over C-12 over a 2,000 year period such as shown, would be next to useless - if shown to a political partisan. The quantitative basis would be obscured behind the need to preserve one's personal beliefs and biases.


For many years I've pondered why it's so difficult to get through the brains of hardliners on the Right, say to convince them of the validity of  global warming, Darwinian evolution or even the need for raising taxes in a low aggregate demand economic environment. Over years of honing the most comprehensive, fact-based arguments nothing seems to have sunken in, and the other side - for whatever reason- never appears to grasp or accept them.

Now, however, it appears an answer may be at hand. We may now finally know why it is that arguments, no matter how logically crafted or fact-based, are always doomed to fail if the brain of the other person is inherently biased and partisan.   One needs then to examine Yale law school professor Dan Kahan’s new research paper  “Motivated Numeracy and Enlightened Self-Government,”. (For those less inclined to technical takes Chris Mooney’s piece about it,  “Science Confirms: Politics Wrecks Your Ability to Do Math”, is perhaps a better option.)

What Kahan  did is to conduct ingenious experiments concerning the impact of political passion to affect people’s ability to think clearly.  His conclusion:  partisanship “can even undermine our very basic reasoning skills…. [People] who are otherwise very good at math may totally flunk a problem that they would otherwise probably be able to solve, simply because giving the right answer goes against their political beliefs.”

Thus, when we provide evidence or the numbers, showing that the CO2 concentration in the atmosphere is now at nearly 450 ppm and it's increasing at the rate of 2 ppm per year, and that the solar insolation is increasing at the rate of 2 watts per square meter per year, it means absolutely nothing to the politically- contaminated brain. The numbers won't be processed, the rate of increase - relative to the critical tipping point  (550 ppm) for the runaway greenhouse - won't be appreciated. The same applies to any quantitative data shown in graphical form, such as the one for the isotope C14 excess over C12 shown at the top of this post.


In other words, we can say 'goodnight'  to the dream that education, journalism, scientific evidence, media literacy or reason can provide the tools and information that people need in order to make good decisions.  Not even graduate degrees, it appears, can make a difference in perception or insight if the person is a confirmed partisan. Global warming will remain a "hoax" even if he avails himself of the excellent Yale course on global atmospheric dynamics, e.g.
http://oyc.yale.edu/geology-and-geophysics/gg-140

The  lack of information then isn’t the real problem.  The impasse resides in how our brains work, no matter how smart we think we are.  Just like the OAA or orientation and activation area of the brain, pre-disposes it to God talk and special beliefs - i.e. that a person is one-on-one with the deity- other brain regions (e.g. temporal lobes, optical chasm) impede rational processing of data, information.

Sure, all humans want to believe they’re rational, but Kahan's work shows that in reality most people employ their reason  ex post facto to  rationalize what they already want to believe. Thus, if they already believe global warming is a "hoax" their brains won't work in order to process new information that invalidates that, but rather they will search for bogus information (say from a Terry Lovell, or Richard Lindzen, or Jason Lisle) that reinforces their misperceptions. So in fact, they are prepared to waste their brainpower to protect their political belief systems.

Do facts matter at all anymore, what with Neoliberal PR dominating and the artificial manufacturing of consent pushed by it all over the Zeitgeist? The answer, basically, is no.  When people are misinformed, giving them facts to correct those errors only makes them cling to their beliefs more tenaciously, because their engines of rejection will work ever harder by rationalization to protect them. This includes citing bogus sources - such as FAUX News- to assert their beliefs have merit.

Kahan, meanwhile, gives excellent examples in his work of how the brains of partisans set up barriers to correct their own beliefs:

- People who thought WMDs were found in Iraq believed that misinformation even more strongly when they were shown a news story correcting it. In most cases, they asserted the source (e.g. MSNBC) was wrong, and their source (FOX, Rush Limbaugh)  correct.

-People who said the economy was the most important issue to them, and who disapproved of Obama’s economic record, were shown a graph of nonfarm employment over the prior year – a rising line, adding about a million jobs.  They were asked whether the number of people with jobs had gone up, down .

-If, before they were shown the graph, they were asked to write a few sentences about an experience that made them feel good about themselves, a significant number of them changed their minds about the economy.

Kahan's bleakest finding was that the more advanced that people’s math skills, the more likely it was that their political views, whether liberal or conservative, made them less able to solve the math problem.  This is interesting in itself, and once again, shows me that without critical thinking skills both sides are liable to go astray. Thus, we see  liberals  more and more supporting Obama blindly,  asserting "Good American exceptionalism" and "Obama right or wrong" even as he was castigating Edward Snowden as "no patriot" or banging the drums for war with Syria. Meanwhile, we see many conservatives blindly following the Tea Party like lemmings, even as they may lead them (and all of us) over the cliff with the debt ceiling impasse.

If only our brains were more evolved these problems might be solved. But without serious external intervention, this is all but impossible. The alternative being having to wait another million years for the biological evolution of the brain to occur.
Posted by Copernicus at 9:33 AM