Why are Americans so damned religious? 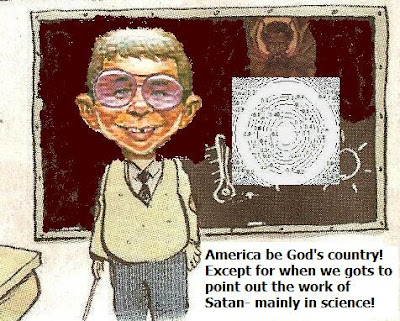 A Gallup poll released Tuesday gave yet more cause for consternation among many in this country. What it revealed is that Americans remain outliers in terms of their hyper-religiosity, amongst the advanced, developed nations of the world

This is strange until one compares the preceding percentages with the Gini coefficients measuring economic inequality, as well as surveys of academic performance among the nations as well – whether elementary, secondary or tertiary level. What one finds is enough to despair this country will ever pull up and may actually descend into a new "Dark Age" as Morris Berman has forecast. (Cf. Dark Ages America)

In reference to the Gini coefficient, we know it registers the degree of economic and income inequality in any given nation, referenced as a decimal(e.g. 0.3) , or, more often (in non-technical venues) as a plain number between 0 and 100. In terms of practical applications, a Gini index of zero would denote perfect equality. In terms of western industrial nations, most developed European nations and Canada tend to have Gini indices between 24 and 36, the United States' and Mexico's Gini indices are both above 40, indicating that the United States and Mexico have greater inequality.

Comparing Gini indices or coefficients across the first world (of developed nations) it is always found that lower economic and income inequality correlates with lower religiosity. This pattern is statistically progressive and no exceptions are known, except for the U.S. The core of research (largely statistical) shows the primary reason the U.S. is a statistical outlier in religious belief is income inequality. Moreover, we've seen the index (and inequality) increase ever since Bush Jr. was handed his presidency, compliments of the five Supremes, in 2000. Obama's presidency has made some small inroads, and may make more (with his new health care law) but that isn't expected to begin before 2014. Worse, if Repukes succeed in torpedoing it as "unconstitutional" - because of the mandated pay-ins for insurance, then all bets are off.

Meanwhile, with its historically lower taxes, fewer public safety nets, more poor than rich (by more than a 25:1 ratio), the U.S. displays a greater disparity than any other advanced nation. Moreover, it displays a much greater social pathology. Understanding the basis of this pathology doesn’t take a genius. As anyone with more than air between the ears can see, on examining state by state budget deficits now exploding (with state governments threatening to cut services to the poor, as well as teachers, police etc.) “re-balancing” is inevitably done on the backs of the poor, the disabled, the elderly and the homeless. Loss of health care, loss of jobs and loss of overall security results, as well as increase in drug use, and crime.

Given the resulting mass insecurity and economic discomfort – which we’re seeing a lot of in this recession as more and more lose jobs and go to food banks- the victimized citizens turn to the aid and protection of specious supernatural powers since they can’t expect any relief from government. In other words, the economic inequity drives the vulnerable to seek religious remedies. (Even more glaring when one realizes most homeless shelters and charities, food banks are run by religions, not private services). One can think of one word here, and it is 'extortion'.

By the same token, when scores from international science and math tests are compared, one finds that the U.S. consistently ranks in the bottom quintile of performance. Often, it is beaten out in science tests by small countries like Slovakia or Singapore.

What gives? I believe the answer is that we are losing our kids as a nation, to the mainly religious dolts who sit on school boards and deliberately corrupt and destroy the curricula in the interest of their ideologies. They eviscerate evolution from high school biology, or they allow "Intelligent design" or creationism to be taught along side – defeating the whole purpose while stealing precious class time for nonsense. They omit any reference to or cursory study of the Big Bang in Earth Science or astronomy courses, and they often exclude critical books from student reading lists. The land of "the free" clearly doesn't fancy free thinking, once there is any remote risk that questioning of the basis of existence may arise. No, it's more important the kids all believe in supernatural fairy tales, like talking snakes and donkeys or guys living inside the hydrocholoric acid of whale's bellies for 3 days- and popping out alive and in one piece! And these bumpkins have the nerve to call us "idiots"!

No surprise then that kids grow up scientifically illiterate, even as they're led around by the nose toward supernaturalist religious hokum. They then grow up as misinformed citizens devoid of critical thinking who invest their minds in “faith”. Now, add on a dollop of economic inequality - since any kid deficient in real science is not likely to be hired in any high paying job like tech- and you have added the basis for more religious pressure.

Government is eschewed, unlike other countries such as France, in favor of prayer or church charity. Never mind the latter can’t help or compensate when millions of families are malnourished on a mammoth scale because they can’t get food stamps – because the latest Republican cabal has torpedoed legislation for additional food stamp benefits.

In this barren landscape, people will desperately grasp and reach for religion. What the hell else have they got? Government’s contributions have been compromised or undermined by anti-government jackasses even as they pump and hump to extend tax cuts for the rich who need it the least. (And never make any bones about wanting the money from the tax cuts to buy more luxury yachts or invest in ETFs, or Hedge funds - NOT to create new jobs! ) No wonder this nation is often regarded as a collection of morons by its nation peers.

They consistently vote against their own self-interest, as they are likely to do again come November….because the poor little infants couldn’t get their gratification fast enough – plus they want their tax cuts plus their Social security benefits….and forget about repairing all those collapsing bridges, roads, and sewer systems. They’d rather let it occur than pay the extra taxes needed for $2.2 trillion in repair.

One keeps hoping at some stage there'll be a collective wake up call and at least the younger generation will break free of this downward spiral. But the jury is still out. If they remain instead wedded 24/7 to their Twitter feeds or Facebook, we may well become not only a nation with 250 million impoverished religious crazies, but dumb ones besides!
Posted by Copernicus at 11:24 AM