There's One in Every Family! 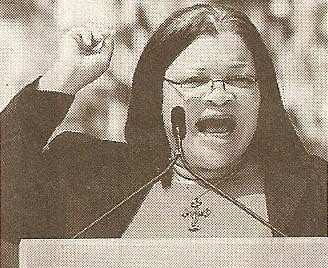 Alveda King, fulminating at the Beckie rally on Saturday

I read with no small degree of amusement Jonathan Capeheart's account: 'The Shame of Cousin Alveda King', in The Denver Post yesterday. Capeheart, a Washington Post columnist, observes how Alveda brought enormous shame on the whole King clan by appearing at the (nearly) all white "Saint Beck" pseudo-religious rally on the DC Mall last Saturday. Basically she, like the other fulminating and holy roller clowns, desecrated the place where her "Uncle Martin" gave his 'I have a dream' speech on the steps of the Lincoln Memorial 47 years earlier. While that signal gathering sought to address social injustice and inequality, the Beck assembly of clowns degenerated into a miasma of maudlin sanctimony -more than enough to make the toughest constitutions retch.

While Martin Luther King Jr. was a font of tolerance and wisdom, his niece - like the other "Beckies"- are repositories of intolerance and religious bigotry. Capeheart in his piece notes her being both "anti-gay", as well as anti-choice, and no doubt (though he doesn't come out and say it) anti-atheist.

The worst outrage was this little known relative proposing to speak for him at a rally he himself would've disdained as a covert Klan fest. Having lived at the time of King, and seen his speech, I can tell you that not one in ten thousand of those 87,000 or so people (I don't buy that there were more than 100,000) would've appreciated what he was about. But this is what happens when a token celeb gets center state at a Tea party sponsored religion-fest: she abuses it.

Of course, my sympathies go out to the other King family members that had to endure this mockery. If it's any comfort, such goings on - especially with frothing at the mouth bible beaters- isn't unique to the King family. My own years long war with my wannabe pastor brother continues - though tuned down to a much lower temperature and decibel level, and he now doesn't even call me "brother" any more but "cousin". Well, whatever floats your boat. If you're more comfy with "cousin", so be it and have at it, cuz.

My point here is that family shame and embarrassments are a dime a dozen in this country, and affect not just the famous clans. Usually, the shame emerges from one particular family member - who because he or she never received enough love and attention -or whatever, takes it out on all the other members later. He or she incenses his parents with condemnations of their religion or beliefs, even as he castigates siblings for not specifically following the hallowed path set out for himself-herself. It's really pathetic actually! One is tempted sorely to say: "Get a life!"

Meanwhile, this past weekend, my niece Heidi visited from Arizona and I was enthralled at her wonderful, open-ended spirituality (which didn't hinge on proselytizing or punishing others) and her genuine embrace of tolerance as she practiced her spiritual energy and holistic healing exercises. This included going to the peaks of two of Colorado's tallest mountains and expressing an affinity with the cosmic life force in all its manifestations, as she let loose a beam of love energy to embrace and heal the planet.

Later, in conversations, Heidi related how the very thought of seeking to convert others to her way of belief would be an abomination. "People have to be allowed to pursue their own paths, without interference", she acknowledged. As a member of The Aetherius Society she practices what she preaches, and her sole agenda in life is to heal her family and heal others on the planet who are hurting, and certainly don't need any more hell-benders flouting their own fears in their faces.

Heidi's example could be a stellar one for both Alveda King and a certain pastor, if they chose to follow it.

But enveloped in their own bubbles of self-righteous blindness, it's doubtful that they ever will. People who worship false gods, including bibles, don't know the first thing about healing: in their own families, or extrapolated to the people on this planet!
Posted by Copernicus at 1:13 PM