What's the Point of a Professor? More Than You Might Imagine Evidently,  Emory professor Mark Bauerlein's recent NY Times essay really raised a hue and a cry. In his piece Bauerlein asked “What’s the Point of a Professor?” and answered (in part) that what they should be is examples of “moral authority,” but for a number of reasons they are increasingly becoming morally bankrupt “accreditors” instead.  I'd go even further and say they are almost becoming redundant appendages or even jokes, see e.g.

Bauerlein's piece inevitably stirred up the proverbial hornet's nest as many professors took umbrage at both Bauerlein’s definition of what a professor should be and his own entitlement to make such assertions.. Indeed, University of Rhode Island History professor Erik Loomis  argued whether Bauerlein should even be in the position to be deciding what other professors are supposed to be. But, good cripes, as a professor with valid experience at one in a 4-year university, why shouldn't he be?

For his part, Bauerlein - in a salon.com interview-  emphasized that his target was four-year colleges where students pursue BA and BS degrees, which is certainly a limitation on the commentary.  He observed:

"The situation at two-year colleges and with vocational education is certainly different. And within that four-year population we have differences among liberal arts colleges, religious institutions, large state universities, etc. But I stand by the general drift, which is sustained by data from NSSE, the American Freshman Survey, the College Senior Survey, Academically Adrift, and longitudinal studies of grade and homework time."

Bauerlein also pointed out that it is even more important that professors impress upon students the moral meaning of their studies. College is a unique time of life, and it passes quickly, and it shouldn't be all about beer keggers, sports, sex hookups and goofing off.  In fact, as Bauerlein put it, most college students will "never again have the chance to discuss why Paolo and Francesca have to suffer so long [for the sin of lust in Canto V of Dante's "Inferno"], what makes the opening measures of Wagner’s “Tristan” so great, who the Neocons were…"    And I would add, never again have the chance to investigate the physics of light or atoms in a properly equipped lab, or learn about the innards of stars.

Bauerleitn's point was impressing upon students a higher eloquence of knowledge, including the significance of the past, the cultivation of taste, the basis for scientific discovery and all the other things that youth culture and mass culture  currently disregard. Indeed, students that dismiss these aspects of college education are likely squandering the most long lasting capital - more important than any job (which may only last a few years). The most perceptive take  on this appeared in an article('The Myth of Higher Education') by Dr. Steven B. Mason in an issue of Integra (No. 9, Oct.  2010) the journal of Intertel:

Mason adds that it "teaches a person to live - not to earn a living" and that living encompasses an impetus for further learning just for its own sake. If a fantastic, well-paying job also comes with it, that's icing on the cake.  This pretty well dovetails with Bauerlein's message as well.

Regarding critical thinking, Bauerlein is also on the mark, relating the importance of having background knowledge of a subject before one can apply critical thinking. We need to build familiarity with significant historical, cultural, political, scientific  phenomena as a prerequisite to critical thinking. (This is the longstanding argument of E.D. Hirsch’s cultural literary project.) The question is what counts as significant. Those who think that critical thinking can be cultivated as easily through the study of “Breaking Bad”  or 'Dexter' as through the study of “Paradise Lost” are naive. We need great books and high culture, works of gravitas and  genius as well as close examination of  events of historical import, political theory and religious doctrine.  We need to inculcate in students to give attention to creations that have stood the test of time, that possess aesthetic excellence and introduce youth to the full range of human experience. Identity is no criterion of selection, nor is political correctness, nor ideology.

Bauerlein raised similar points in his book,“The Dumbest Generation,”, on how all these serious facets of knowledge were more and more being ignored by the younger generation in favor of superficial, social media dilettantism and  time wasting. If any subject was then considered too difficult or troublesome it was ignored.

The result has created a generation of adolescent infants who,  while physically mature, think and behave like overgrown toddlers. Much of this, according to Bauerlein, began with the impetus to "youth self-authorization" in the mid twentieth century - and particularly the invention of a new species of American social creature: the teenager.

Before 1955 or so and the beginning of the 'rock 'n roll' era, teenagers didn't exist. The culture of rock music in tandem with its promoting media (e.g. 'American Bandstand', Ed Sullivan Show) created them with the constant reference to "teenagers"  -reinforced by the rock song titles ('Teenager in love', 'Teen Angel', etc.) Thereby granted specious autonomy as a distinct culture, the "teens" went one further and also extended themselves separate authority - including the authority to render judgments on the adult world and its doings.

What began as the counter culture (and in fact, helped to end the Vietnam War and racial segregation etc.) then became warped and grossly segregated from the larger society in the digital age. As Bauerlein notes:

"The digital age has accelerated the process of “age segregation.” With social media, youths can now spend all their time communicating with one another. It’s easy to tune out the grown-ups: just open that screen."

But, the downside is the kids that have succumbed to this vapid electronic social media void are left in a self-reinforcing bubble of infantile choices, obsessions and thinking. How can it be otherwise when they are so enslaved by their smart phones and texting they can't attend to the education they're supposed to be participating in? 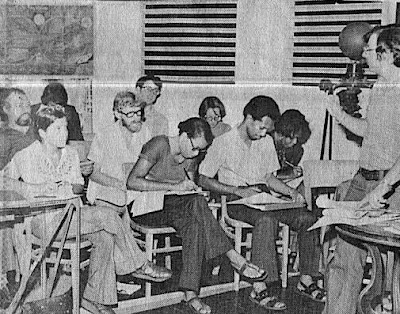 Me, giving an astrophysics lecture in 1980. The idea of pulling out a small device to act as a personal distraction would have been unthinkable back then  - even if they existed.

Back in the early 1980s such distractions as miniature electronic devices, e.g. cell phones, smart phones, Apple watches etc. didn't exist. Students in courses - whether English Lit or astronomy - gave their undivided attention and were the better for it.  Even if such devices did exist, I am convinced these gadgets wouldn't be misused like they are now. Contrast that with the current situation where it's been found Americans now possess an attention span of 8 seconds, a degradation almost certainly to be blamed on addiction to digital media.

They spend ever less time paying attention to grown-ups, and so when a teacher insists that they come in to the office for a face-to-face exchange, many of them falter and resist. We have to break through their reserve and show them that the peer-absorbed world they generally occupy is something to escape in college, not extend.

Most interesting is Baeurlein's take on those who have responded negatively to his book, observing:

The vast majority of emails are blunt, trivial exercises, a way of avoiding substantive contact. The tool invites it. It promotes quick info and casual address. (Some being, “Hey…”) This is one reason I disallow laptops and tablets in class. Close that screen!

Baeurlein's complaint is one I've made a number of times in different posts. That is, the very nature of most electronic media (e.g. Twitter, Facebook) is such that it facilitates 'shoot from the hip' reactions as opposed to reflective ones.  Such digital dumping can occur with mindless responses to a serious matter, such as Marilyn Mosby's recent announcement of charges on 6 Baltimore cops, e.g.

Or it can manifest as imbecilic rants from racists - say to the selection of a "Miss America" candidate they see as "un-American" e.g.

The point is that the built in limits (140 characters for tweets) almost ensures blatherskite and bombast as opposed to thought. The repetition of such reduced communication almost ensures - along with the diminishing attention span  - we may end up like the nation portrayed in Mike Judge's spoof  'Idiocracy'.

Bauerlein's other point about prompting "quick info" - e.g. from rapid Googling, is also on the mark,  and some would argue it's the only way to get information. To which I'd respond, that if you don't also know how to go to one of those old fashioned buildings called libraries (even if they have computers) and use them to locate actual source periodicals and books, you are fooling yourself.

You may also wish to consider what will transpire that fateful day, 100 years past Peak Oil (estimated to have been in 2005),  when electronic devices only work for limited periods or require special generators since the main power grids have all collapsed - both from lack of maintenance and .....energy to drive them.

Sadly, Bauerlein's call for imparting moral authority will likely fall on deaf ears, since most profs and students have already been acculturated to the Neoliberal mode of consumption as the only "authority", i.e. for the "marketplace".
Posted by Copernicus at 7:45 AM