It has taken some time for those outside of deep politics to see the connection between the morass in Baltimore,  the killing of Freddie Gray and the ensuing protests - with the rise of the Neoliberal security state.  But without sufficient background and information, just as in the case of the JFK assassination, most people are left to flounder - ultimately becoming mental hostages of corporo-media propaganda narratives.

As far as background, perhaps one of the best sources for the serious researcher is:

As noted therein, with the rise of trade unionism, a virulent merger of interests began to metastasize - now bringing in military and intelligence interests.  With enormous leaps in worker (Union) power, culminating in the achievement of the 40-hour week in the 1940s, the Corporate State began to feel itself under siege. Somehow a means had to be found to dilute the power of unions - and, if possible, eliminate them entirely.  The corporate state fought shrinking the work week to 40  hours, for example,  because that inflated the cost of their labor capital. They'd need to hire more workers, at the same or higher wages, to maintain the same production levels. (This is also why the corporate state looked to the day American manufacturing labor could be transferred to low wage, low regulation nations - e.g. via trade agreements)

Even before this, a wary eye of the security forces had been kept on the working classes especially, since the Haymarket Square riots in 1886. So no surprise that in its wake the Chicago police began to listen to soap box speeches, infiltrated activist meetings, arrested speakers, intimidated strikers and shot demonstrators.   By the middle of the 20th century target lists were increased from labor unions and anarchists to include communists, black radicals, neighborhood organizations and New Left groups - culminating with the 2011-12 targeting of Occupy Wall Street by actual sharpshooters, e.g.

The energy, extent and power of OWS mobilized multiple security forces especially based in "fusion centers" that connected police centers across the country. But as the OWSers tried to invade Wall Street itself, the Neoliberal elites realized they had to develop powerful new communications and spy systems as well as weapons to control any major uprisings. These included a new breed of electro-magnetic weapons especially using high frequency radio signals (cf. The Economist, Oct. 15, 2011, p. 89, 'Electromagnetic Weapons: Frying Tonight') 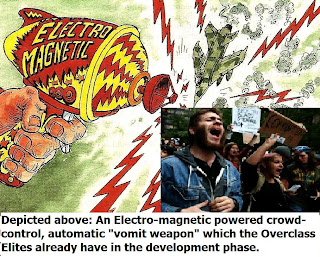 The simplest one, and perhaps least destructive physically, emits RF (radiofrequency) radiation that directly affects the human digestive system and nervous system to trigger violent vomiting. It is estimated that one brief "spray" by such an RF device could have 99% of a violently agitating crowd reduced to paroxysms of non-stop vomiting within seconds. Unable to raise a whisper, far less a shout, the theory proposes that one burst would be enough to send most protesters running back home....and away from the zones now occupied. Make no mistake this type of crowd weapon would have been deployed had the riots in Baltimore not subsided.   But it could have been worse, and might be - if the 6 cop thugs get off after homiciding Freddie Gray!

At a more savage level, The Economist reported (ibid., p. 90) that a more intense "Active Denial System" - "developed by the Joint Non-Lethal Weapons Directorate in collaboration with Raytheon" can be up to the task of dispersing hard to manage or rioting crowds. As The Economist notes:

"It works by heating the moisture in a person's skin to the point where it feels like....opening a hot oven. People's reaction when hit by the beam is usually to flee. The beam's range is several hundred meters".

Thus, the range would have exactly covered the range in West Baltimore where most of the protesters gathered last week. Since one meter is about 3.3 feet this means a single beam could  have covered  just about all of Freddie Gray's Sandtown neighborhood.

What about the devices to target trouble makers, including working class upstarts, trade union rabble rousers and aggressive protesters? No problem!  Enter an array of techno-trackers including: StingRay, FIshHawk, Kingfish,Harpoon and Amber Jack.

The other ancillary devices extend StingRay's power and range, e.g. the Amberjack antenna helps pinpoint individual phones, KingFish analyzes call patterns, and FishHawk listens in on calls. All these amplify police power to the same level of the national security state but this is no coincidence.

The U.S. military and intelligence community developed StingRay in the 1990s and police nationwide began using it as early as 2003. This nefarious technology - the ACLU asserts it violates privacy rights since it captures ALL information from every phone, not just a suspect's - emerged as part of a post 9/11 push by the feds to step up local police intelligence gathering.

Indeed, since 9/11, the Department of Homeland Security has given more than $34 billion to local law enforcement - much of it for high-tech surveillance gear like StingRays and facial recognition systems.  Seventy -eight DHS funded fusion centers now exist where local police work side by side with federal agents to ferret out potential activist troublemakers, protestors and labor rabble rousers. To grasp the magnitude, nearly 18,000 local departments and federal agencies swap reports daily. Amongst the biggest outfits, with the most surveillance - mainly concentrated on the working class - is the Chicago P.D. ('In These Times', May, p. 14)

But Baltimore would not have been far behind, since the Neoliberal elites ensconced there would have recognized the threat from the poorest folk stuck in the Sandtown section of West Baltimore - faced with abandoned buildings (no one knows who owns them), no industry, no employment and public transportation so poor it takes over an hour to get from the corner of Dolphin St. and Drew Hill Ave. to get downtown for jobs. And that assumes the buses run on schedule.

As MSNBC correspondent Joy Reid pointed out on 'All In' two nights ago, West Baltimore was originally laid out as an enclave for the poorest residents of the city and only minimal investment was allowed - most was concentrated downtown. The urban decay that ensued from disinvestment and abandonment - most of the money flowing to the county and city (where it was re-directed to the upscale areas like the Inner Harbor)-  left W. Baltimore a backwater, but also a security threat. Hence, the Baltimore cops were ordered to crack down especially hard. A part of the blame, alas, must also go to former Mayor O'Malley who instituted a draconian, zero tolerance policy citywide during his reign - with citizens taken down merely for tossing a cigarette or spitting on the street. Since the cops came down hard no matter what the offense, the stage was set to ramp up hostility and mistrust.

The incarceration resulting from prosecuting multifold  "tweedle-dee" incidents also magnified the absence of fathers in the W. Baltimore area, as well as creating a vast army of unemployed. Kids were left without guidance, as well as with an axe to grind especially against the cops. Meanwhile, families were left without enough income or support to prosper or to move. Even as the Ravens' sparkling new stadium came to life with the help of taxpayer money, West Baltimoreans were left to flounder with zero investment.


Is there a connection between the era of mass incarceration and the era of the burgeoning national security state?

Oh they’re completely connected and inextricably linked. There’s so many different similarities that bind them together, but the most important one is just the mentality. Part of the War on Terror is how we’re taught to think that once you have a group of people who are identified as some kind of menace or threat to security, essentially anything can be done to them. They can be killed or brutalized or imprisoned without any real due process, and that’s all justified because they’ve demonstrated themselves to be a threat.

Alas, Freddie Gray - merely by "running while black"-  presented himself as such a threat to Garret Miller, Brian Rice and Edward Nero  who throttled him to the ground in a "leg lace" then chucked him into a paddy wagon. They wanted to make sure he got bounced around in a rough ride - severing his spinal cord. As Daily Kos reported, once the cops got back to the station they bragged (over Freddie's limp body) how "they really gave him a run for his money".

http://www.smirkingchimp.com/thread/marjorie-cohn/62094/the-chickens-come-home-to-roost-in-baltimore
Posted by Copernicus at 6:51 AM