'Citizen Four': An Oscar-Winning Documentary Every Citizen Needs To See 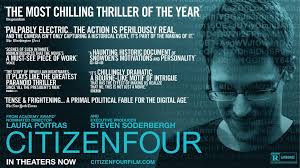 Though it's been nearly two years, most alert and aware Americans still can recall the brouhaha that erupted after Edward Snowden exposed how we were all being tracked relentlessly by the NSA. Tracked using programs with cryptic names such as XKeyscore and PRISM. Tracked via our telephone calls, emails and our web wanderings - including even terms we'd googled and all the websites visited.  Of course, in the wake, the Neoliberal machine  and its 'evil sister' Neocon War-Security state,  exploded with self righteous indignation - questioning who exactly was this "traitor" (with only a high school education) that brought these things to light.

Those of us who are real Americans applauded Snowden's courage in outing the vile violators of our Constitution's Fourth Amendment, which reads:

Clearly showing that only individual warrants are acceptable and one cannot have mass warrants issued out of laziness, disrespect for the Constitution or mere expedience and efficiency provided by technology. Moreover, Snowden was ultimately vindicated when a  300-page report     was released last year by a commission appointed by Obama himself (who was finally backed into a corner after NSA spying on foreign heads of state was made public in one release)

All this came out at the time, but what is less known is the backstory on how Snowden accomplished his file access and then made contact with the journalists who he would entrust with the actual file release. That incudes documentary film maker Laura Poitras who - with Glenn Greenwald (then journalist for the UK Guardian) took home the Oscar for the Best Documentary Feature on Sunday night.

Watching the film last night on HBO, Janice and I were both spellbound as the movie - though totally factual - had the aura of a John Le Carre spy novel. We see the first encrypted messages between Poitras and Snowden and then the instructions she needs to follow to ensure the spooks aren't listening in. As I mentioned to Janice (barely one tenth of the way in), the guy may only have a high school degree but he's absolutely brilliant as well as skilled - something the idiot corporate media downplayed when they tried to make the story about him.

The scene in his Hong Kong hotel when he needs to upload a set of documents to Greenwald's laptop is intriguing in itself, including all the sundry precautions taken to ensure electronic spying eyes or ears don't compromise the transfer. Greenwald and another Guardian journalist are then charged with releasing the files using their best judgment since Snowden didn't want his personal bias reflected. He also wanted to delay his identity being outed so the story could be about what was done to his fellow Americans, as opposed to making him the story. (Which eventually happened thanks to our Neoliberal media elites.)

Two of the more appalling scenes which made us want to chew nails, showed NSA honcho Keith Alexander and then James Clapper lying through their teeth before congress when directly asked (by Sen. Ron Wyden, in the case of Clapper) if any  phone calls of ordinary Americans had been scooped up by the NSA. (After some prodding the turkey explained it might have been done "accidentally") 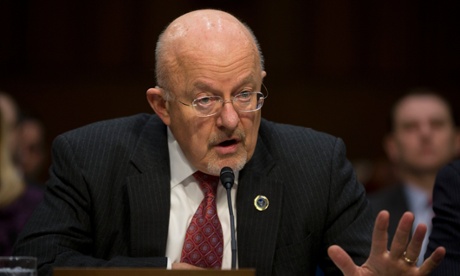 In another scene that soon follows, where the NSA's mass surveillance of  (Verizon) phone records is being challenged,  we see a Justice Dept. lawyer trying to argue the federal court hearing the case has no real standing and besides, "national security would be affected" if the mass seizure of phone records was stopped.

The documentary then follows Snowden's crisis after his name is released, and we see here this is what he wanted as he didn't wish to be perceived sneaking around "in the shadows".  From the CNN broadcasts the media learns he's holed up in a Hong Kong hotel and it soon becomes clear he needs to leave or risk possible extradition. He's then helped by Julian Assange and his group to make it to Russia and we see only occasional communications with Poitras keyboarded onto the screen - he's obviously taking great precautions.

The issue of the sort of justice Snowden might face (if he returned to the U.S.)  then comes up for discussion and it's noted he'd be prosecuted under the 1917 Espionage Act as a spy, just like other whistleblowers. There would be no comeback and no fair trial because the court and jury proceedings would be entirely weighted ab initio for Snowden's guilt as a spy.  The preservation of the amendments of the Constitution would be totally irrelevant. All of which points up the fact that those yahoos who yelp about Snowden returning and "facing justice" are idiots.

This segment also had our heads ready to explode given that Obama is a former Constitutional lawyer and essentially betrayed all his (early) promises of governmental  "transparency". What makes it even more wretched is how those doing the truth telling,  whistle -blowing have been put behind bars while the torturers and Constitutional violators have been allowed to roam free and even appear on TVs .... as opposed to being shot or turned over to the International Court in the Hague.

The segments dealing with the NSA's overstretch in spying on Brazilian leaders is also gripping, with Greenwald delivering testimony in Portuegese before the Brazilian parliament. And then William Binney, former NSA technical director, testifying before the German parliament to do with NSA's mass  spying on Germans.

The final scenes show Snowden and his girlfriend (American, who joined him in July, 2014) seen through the window of their Moscow apartment.

Leave out Oscars' host  Neil Patrick Harris' idiot snipe about 'treason'(after the award), most real Americans know that Snowden is a hero, a Constitutional protector and defender, and if this film doesn't convince you (assuming you don't believe it currently) well,  you need to admit you're just like the Good Germans. That lot who were quite happy to have the Gestapo looking over their shoulders, and were more than elated to turn their neighbors in on the slightest pretext.
Posted by Copernicus at 9:21 AM