Educating An Australian 'Bloke' On Basic Precepts of Truth & Authenticity Re: The JFK Hit

Good grief! It appears the virulent, mind -numbing, truth - perverting infestation spawned by the likes of  John McAdams has insidiously and collaterally crept into the brain of a certain Aussie.  After Richard Charnin posted my takedown of a recent McAdams' snipe  on Google groups, an Aussie named Tim Brennan (from Sydney) scribbled a terse response that read as follows:

"Stahl is probably some bloke who makes regular blurtations on Global  Warming as well.

Can't see how his expertise on solar matters makes him some kind of JFK  expert."

Timmy, Tim, Tim!  Seriously? "Blurtations on global warming?" If you mean posts showing how it is supported, and by a majority of REAL climate scientists  i.e.

Then yes indeedy, I stand accused! But only insofar as attempting to dispel the gigabytes of denier nonsense making the rounds, viz.

And evidently infecting susceptible brains like yours. But considering the whole denial gestalt, perhaps it is no coincidence you share denial of anthropogenic global warming and denial that there was a conspiracy in the murder of JFK. The memetic underpinnings are extremely similar and in both cases basic physics is rejected in favor of transparent codswallop masquerading as science.

Re: your not being able to see how my expertise on solar matters "makes him some kind of expert on JFK."  Well, that was why you needed to read the content in the link provided by Mr. Charnin - where you would have found:

2) I am most certainly a bona fide expert on the JFK assassination having already written one of the most extensive books of analysis ever: 'The JFK Assassination- The Final Analysis' based on more than 35 years' research.


Brennan  also goes on to babble:

Stop the LIES! Oswald INSIDE!! Disband the OIC!!!

Oh really? Stop the LIES? Seriously?  How about the Warren Commission's LIES on its assorted exhibits, maestro? Though not included at the time of the WC Report as an official exhibit,  the fake autopsy photo -image (left -below) did surface at the time of the House Subcommittee investigation ca. 1979 - when the actual autopsy image also did. (Gerald R. Ford prevented the release of any autopsy photo- even the fake one -  as an official Warren Report exhibit because he believed them too graphic.)  However, this false image did conform with the drawing fiction of how the WC believed the head shot ought to have occurred, e.g. http://jfkassassination.net/russ/infojfk/jfk1/1p255f68.jpg 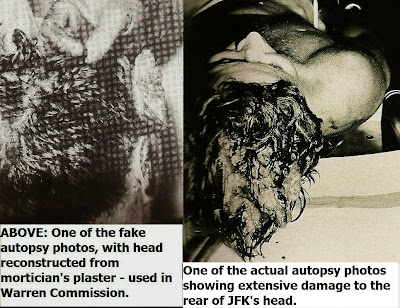 The reference to "used in Warren Commission" then, doesn't  mean as any official exhibit - but as a dummy mold or 'model'  from which the 2D fictional head shot drawing was rendered.  The critical aspect being the phony basis for a rear shot as opposed to a frontal shot.(The fake construction was done before the WC sketch was made part of the WC exhibits)


which I have already exposed as fakes, e.g.

Then there was the WC exhibit of the fake FPCC handbills. In respect to these, Military Science Professor John Newman in his 'Oswald and the CIA' refers to[1]:


"evidence that was deliberately falsified at the Government Printing Office during the publication of the Commission Exhibits."


But let's not stop there!


In respect of the Warren Commission  CE399 exhibit, Dr. Joseph Dolce, a consultant in wound ballistics to the Army, stated he was given 100,  6.5mm bullets, by the Warren Commission, to fire at cadavers. (Documentary, 'The Single Bullet Theory'). In no case,  he went on, did any of the bullets come out pristine as CE 399 showed. In fact, all showed significant deformity. In his own words (ibid.):
No, it (CE399) could NOT have caused all the wounds. Our experiments here show beyond any doubt that merely  shooting a wrist deforms the  bullet drastically. In every instance, the front or tip of the bullet was smashed. It's impossible for a  bullet to strike a bone, even at low  velocity and still come out with a perfectly normal tip.

To fix ideas and clarify,  the images of CE399 (A) and also one of the bullets tested by Dolce (B) are shown below:

As for the 'X' marks the spot baloney Brennan cites, it conforms with the falsity of the other exhibits cited.  What we behold is a boxlike mold in separate scenes,  with presumed projections of "hits" but no indications of exactly where the hits struck in terms of cranial morphology.  (Rendering the 'X' more like a cartoon joke that seeks to confer credibility where none exists.) It's all of the same deceptive piece as the fake FPCC handbills Newman exposed, the fake autopsy photo (though not a formal exhibit - the WC's top guiding honcho (LBJ)  did authorize its creation at Bethesda), the fake Oswald rifle exhibit, and the CE399 fake.  Close inspection of the images in the exhibit frames shows nothing of any value or anything specific in terms of  relating shot precision to the exact anatomical positions in the absurdly configured  "head". We have a word for such bollocks - it's called a "Macguffin".

The fact of the matter is that a trained team of expert marksmen was unable to replicate Oswald's alleged feat! Oswald was presumed to have fired from the 6th floor of the Texas School Book Depository, so effectively six stories up or 60’ in altitude. However, the experts were allowed to fire from a tower only half this altitude (30’)[2]. In addition, while Oswald had to have fired at a limousine moving at 11 mile per hour, the experts fired at stationary targets. Anyone who's ever fired a high powered rifle will tell you it's much easier to hit a stationary target than a moving one!

The target area was also magnified for the experts, to the whole upper torso of the target prop’s body – while Oswald was limited to the head and neck. The latter according to the WC, though in fact, no bullets struck the neck - it was the upper back- level with 3rd thoracic vertebra. Gerald Ford altered the autopsy notes to read 'base of neck' because otherwise the single bullet nonsense wouldn't work, e.g.

More to the point, the rifle was altered away from the one Oswald used. The rifle sight itself was rebuilt and “metal shims were fitted to provide a degree of accuracy previously absent’. When Ronald Simmons, the Chief of the Infantry Weapons Evaluation Branch of the Army’s Ballistics Research Division was asked about this he replied: “Well, they could not sight the weapon in using the telescope" (Op. cit. ,Vol. II, p. 250.)

Thus, even IF the images depicted in Brennan's WC Exhibit link were authentic one would still not be able to conclude that there was a faithful replication of the shooting - on account of the manipulation of the scope!  But don't take my word!  Simmons himself added that the aiming apparatus had to be rebuilt by a machinist with two shims added, one to adjust for the elevation, the other for the azimuth.

In other words, had they actually used the rifle in the same condition Oswald was alleged to have had it, then they’d likely not have hit the side of a barn. (Maybe one reason the Italians dubbed their Norma Mannlicher-Carcano 6.5 mm bolt action rifle that Oswald was supposed to have used as "the rifle that never killed anyone")

At the end of the test trials, these Master Marksmen each fired two series of three shots each (18 rounds in all) at 3 stationary targets placed at distances of 175’, 240’ and 265’ (the last coming nearest to the distance from the Texas School Book Depository to the head shot). Even Chief Simmons admitted that the targets were not placed where they ought to have been to emulate conditions on November 22, 1963.

Just one of the three expert riflemen was able to get off three shots in under 5.6 seconds – the designated time interval for total shots declared by the Warren Commission. And most to the point: none of the total 18 shots fired struck the targets in the head or the neck. In other words, from a technical standpoint of duplicating Oswald’s alleged shots- this trio of experts failed. Another key aspect: for the duration of the 18 rounds, two of the “master” riflemen were unable to reload and fire at the stationary target as rapidly as Oswald purportedly did for the moving limo.

These are the facts, but alas, it is doubtful Brennan would accept them any more than he does the facts of anthropogenic global warming - which he dismisses as "blurtations".  Alas, he fails to see his off the cuff, inane response to Charnin's post was the real "blurtation":  blurting, brainless and an irritation.

You claim to be a JFK assassination expert, yet you think that JFK's autopsy photos are Warren Commission exhibits?! You got WC exhibit numbers for them, maestro? I didn't think so. Some EXPERT, LOL!

Wow! A "gotcha" moment! Sort of! Kudos to you for discovering my reference to WC "exhibits" and (presumably) noticing this was "bait" to lure you to respond on my blog.

In fact, no such exhibits existed because Gerald Ford determined it would be too horrific for any of the Commission members to see them - or to make them public as exhibits. They found their way to RFK who retained them at the Dept. of Justice then they were transferred to the National Archives. They finally did emerge with the HSCA investigation in 1978.

More on the backstory can be found in this youtube interview:

So no, there were no "numbers" for these photos because they didn't exist at the time as exhibits. The question that remains for you is why the false image was used and circulated by WC groupies and not the image showing the rear of JFK's head blown out?

Any answers there, Timmy boy?

Wow! Looks like Timmy is still going off half cocked, now on 'Narkive' claiming I am a "self proclaimed" JFK expert. Errr....no, son, I AM an expert having invested 35 years of research and written an actual book. What have you produced apart from sound bite snark on assorted web posts? He also repeats the nonsense that the WC exhibits showed success in the rifle trials which I already disposed of in this blog post.

He further compounds this by claiming my book portrays the autospy photos as actual WC exhibits, which it does not. After all, how could he know this if he hasn't read the book?

Stymied by his own futility re: JFK assassination issues, Timmy tries to dredge up a single book review my wife did on a 6 year old limited edition book, Dialectical Atheism.

He gets a few yucks out of that, but one would ask him why not have the most intelligent, competent person one knows do a review of a difficult book?

Timmy, alas, has exhausted his bag of tricks and has nowhere else to go but down, confirming he's another sniping puppet in McAdams' orbit.