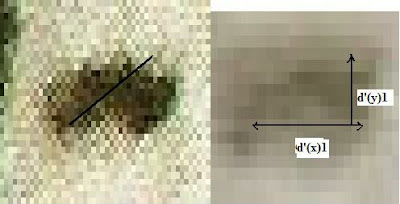 Regions near right eye in 2 photos and fractional pixel deviations for Dt(xb)  and Dt(yb)
Four years ago Dartmouth prof Hany Farid presented alleged "proof" the Oswald backyard rifle photos were "real". Google the name “Hany Farid” and you will bring up about 5,000 pages on the Dartmouth computer software scientist – from almost as many news sources – all parroting that he has “proven the Oswald backyard rifle photo is genuine." (One begins to wonder from this if the CIA's "Operation Mockingbird" is still going on.). For those who may not know, this is the infamous photo taken in the Oswalds’ backyard on Neeley Street in Dallas, sometime in March, 1963 (as documented from FBI files by Mark North in his ‘Act of Treason’) .

I did my own analysis of the backyard photos, based on the reasonable assumption that any transformation from specular dots on silver iodide based (1963) photo emulsions will undergo some drift  over time in rectangular coordinates such that this time-affected diffusion needs to be examined using fractional calculus equations of the form : d’(x) = wH×(d(x)bH) and d’(y) = wV×(d(y)bV).

An illustration of applying the parameters d'(x) and d'(y) to respective pixel sub-frames is shown in the accompanying graphic. These measure fractal deviations in pixel density from one Oswald photo  to the other (there were 4 in all) and from which the weighted error in the conceptual space may be computed.

The total mapped diffusion from (A) is:

The original Euclidean resultant (for A) is:


The mapped (diffused) resultant (for B) is: