Bravo to Pope Francis for Warning of Capitalism's Tyranny and Consumerism! Pope Francis: Gives a much needed shot over the bow to capitalists!

Once again, Pope Francis has shown himself percipient and also with the courage to call out the real culprits in our midst - now including Neoliberal capitalism and wanton consumerism.  This he has now done in an 84-page document known as an apostolic exhortation, headed "Evangelii Gaudium" of the Holy Father. which makes official the platform for his papacy. It also is such a formal document that makes it impossible for any claimed Catholic intellectual or moral philosopher to ever again turn a blind eye to economic inequality and suffering that ensues from it. Most especially, it makes clear that NO moral theologian can embrace "trickle down" supply side" economics or the Pareto model that it's based upon.

Readers will recall in an earlier (Nov. 12) blog post on Francis not being appreciated by the conservatives in his flock (the same breed that also like "trickle down" in the general population) I quoted his earlier words: "Everyone has his own idea of good and evil".

"Which is, of course, true. A starving child or parent of that child will, for example, regard evil as the gross systemic inequality in a supposedly rich nation that permits such a travesty to occur."


Resonant with my own take earlier are Francis' recent words from his document:

"How can it be that it is not a news item when an elderly homeless person dies of exposure, but it is news when the stock market loses two points? This is a case of exclusion. Can we continue to stand by when food is thrown away while people are starving? This is a case of inequality. Today everything comes under the laws of competition and the survival of the fittest, where the powerful feed upon the powerless. As a consequence, masses of people find themselves excluded and marginalized: without work, without possibilities, without any means of escape.

Human beings are themselves considered consumer goods to be used and then discarded. We have created a “disposable” culture which is now spreading. It is no longer simply about exploitation and oppression, but something new. Exclusion ultimately has to do with what it means to be a part of the society in which we live; those excluded are no longer society’s underside or its fringes or its disenfranchised – they are no longer even a part of it. The excluded are not the “exploited” but the outcast, the “leftovers”.

In this context, some people continue to defend trickle-down theories which assume that economic growth, encouraged by a free market, will inevitably succeed in bringing about greater justice and inclusiveness in the world. This opinion, which has never been confirmed by the facts, expresses a crude and naïve trust in the goodness of those wielding economic power and in the sacralized workings of the prevailing economic system. Meanwhile, the excluded are still waiting.

To sustain a lifestyle which excludes others, or to sustain enthusiasm for that selfish ideal, a globalization of indifference has developed. Almost without being aware of it, we end up being incapable of feeling compassion at the outcry of the poor, weeping for other people’s pain, and feeling a need to help them, as though all this were someone else’s responsibility and not our own. The culture of prosperity deadens us; we are thrilled if the market offers us something new to purchase; and in the meantime all those lives stunted for lack of opportunity seem a mere spectacle; they fail to move us."

The shot at "trickle down" is spot -on and we've been saddled with this bollocks ever since one Arthur Laffer dreamed it up,  later deployed during Ronnie Raygun's tenure. (And also in Barbados in 1986, which nearly sent the country to the international poor house). The story goes that the pivotal event was the invention of the "Laffer curve" (see diagram below) on a napkin and on the fly, by a hyper-excited Laffer in 1974. Laffer was then an economist at the University of Chicago and traveled to Washington, D.C. to meet with Donald Rumsfeld, Gerald Ford's then chief of staff. 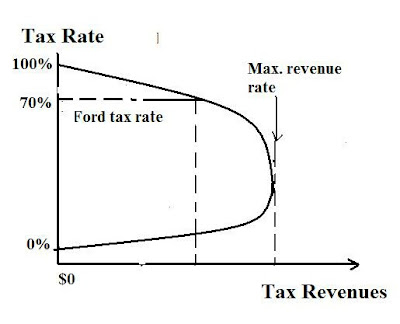 Based on this Laffer hatched a new theory on why tax rates were inefficient and high, or one might say "inefficiently high". The story then goes that one interested nabob from the WSJ asked Rumsfeld to meet with Laffer on the issue. As it happened, Rumsfeld had other commitments so dispatched Dick Cheney instead to a bar, where the meeting took place. (See, e.g. Economics for the Rest of Us by Moshe Adler, Ch. 6) Laffer then proceeded to sketch his infamous diagram on a napkin on why the rich could be said to be "over taxed".

Thus did Laffer's curve become the basis of Reagan's tax cuts and the whole tax cut meme ever since, despite the fact that in reality no community or even human body has managed to GROW by virtue of starving! But try to tell the bulk of Americans, who continue to buy into this codswallop at a mind-boggling rate! Despite the fact there's never been evidence it's actually worked!  Even the Obama administration played into this by extending the Bush tax cuts when ALL ought to have been sunset 3 years ago!

And because of this misguided foolishness, income -economic inequality has been ratcheting up ever since - with NO politician on the left even remotely able to marshal a strong narrative on why higher taxes are needed.

But we who follow these things know this is all part of the Neoliberal free market idiom, especially the sort of "market populism" nonsense that author Thomas Frank excoriates in his excellent book, 'One Market Under God'.   Interestingly, in 2011, as the movement was underway, the ’s Justice and Peace agency called for the establishment of a “global public authority” and a central global bank. The document condemned “the idolatry of the market.” We know also that ever since the 1980s and Reaganism, this idolatry has been on steroids and became endemic in both parties. In this mutation, Neoliberalism declared the only way to "true democracy" and "freedom" was the absolute reign of markets - and in addition, no nation could afford to dispense any security to citizens not market contingent.

To illustrate the perversion of this sort of thinking, Laffer argued that higher tax rates on the rich would only cause them to work fewer hours, or if REALLY rich, invest in fewer projects, enterprises, hence create fewer jobs. Thus, revenues over all would decline, first from the working rich because Uncle Sam would get less taxes by virtue of their reduced work, and also from the investing rich because they'd create fewer jobs and thus no workers would be around to pay the taxes Uncle Sam wants. Thus, Laffer argued, the higher tax rates were Pareto Inefficient! In addition, because of this the common Mickey D or Walmart worker would also suffer.

The argument was further reinforced (mainly in Bush II's 2nd term) that Social Security payments undermined market democratization by providing a stream of income that didn't depend on actual market behavior.  This prompted Ayn Rand acolyte and former Fed Chairman Alan Greenspan to go on record (in an appearance before congress in 2003) to assert that "Social Security benefits need to be cut to pay for Bush’s tax cuts."

Social Security payments, especially with COLAs, do everything the Fed Chairman didn’t want. They pour more money into the economy, but not via productive labor or market indices, returns. People receive their checks merely by existing and breathing day to day, and having paid into the system with FICA deductions. Even then, they receive far more in benefits than actually paid in, making a total mess of Pareto utility.

Since the Bush tax cuts have continued, especially for the Middle class - the supply siders - mainly emerging from the 'Fix the Debt' parasites, have demanded Social Security cuts in the form of COLA revisions i.e. the "chained CPI". The only way to have avoided that would have been terminating the Bush tax cuts for ALL.

Does supply side work? No, not ever - as Francis has clearly observed in his statement,


This opinion.....has never been confirmed by the facts, expresses a crude and naïve trust in the goodness of those wielding economic power

And the facts bear him out! Not only the FT analysis (above summary) of the Bush tax cuts, but also the tax cuts in Reagan's administration.   first full examination of the empirical effects arrived in James Medoff and Andrew Harless, The Indebted Society, 1995, wherein they found, p. 23:

Thus, we have the first evidence that Laffer was plying bare bunkum not sound economic policy! Yet conservatives continue to embrace this horse shit!

This is all the more reason Pope Francis is to be applauded for specifically calling out one of the most egregious facets of market populism and Neoliberal capitalism overall. While previous popes (e.g. Pope John Paul II, Benedict)  discussed the disenfranchised, they didn’t single out the issue the way Francis has. He has not only done so with his words, but in his actions, such as paying his own hotel bill in person or affectionately embracing a man disfigured by disease.

And he has insisted parish padres do the same, getting their "shoes dirty" instead of remaining in their little domeciles  or rectories, untouched by the world.

He has also condemned over the top consumerism such as will be manifested in the US of A this Friday. I believe his subtext is that any professed "Christians"  who'd let themselves go nuts tomorrow in a shopping frenzy (forsaking family traditions)  or on Friday,  actually worship the god of Mammon and not any true God.

With that sentiment, I couldn't agree more!

Posted by Copernicus at 9:10 AM