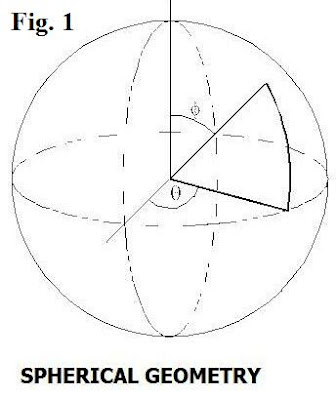 By the time the aspiring Astronomy major reaches his sophomore year, he will be facing even more math in courses such as Spherical Astronomy.  The emphasis here is on astronomical time (sidereal time and position - the latter based on different coordinate systems used (equatorial, horizontal, ecliptic).

Each such coordinate system is defined by a different set of poles and equator. For example, the coordinate system depicted above - the equatorial system - is based on the projection of the Earth's N. and S. poles into the sky, as well as its equator. The poles then become the North and South Celestial poles, and the equator becomes the celestial equator. If these poles are defined respectively at +90 degrees (NCP) and -90 degrees (SCP) and the celestial equator at 0 degrees, then a consistent system of celestial latitude and longitude  can be defined in a consistent system, to locate any celestial object. We call the longitude coordinate (Θ) the Right Ascension (R.A.) while the celestial latitude coordinate is called declination and is measured in degrees north or south of the celestial equator. (In the diagram, the complementary angle of the declination is shown, φ, which we call the zenith distance.)

One of the first things the astronomy sophomore learns is how to find directions around the celestial sphere, including how to relate the R.A. to time and time keeping.  He must also do exercises showing he can find the hour angle - and distinguish it from the Right Ascension. This starts with identifying the R.A. of his local meridian (the imaginary celestial longitude passing through his zenith or highest point.)  The Right Ascension of the star is clearly equal to the local sidereal time (L.S.T.) plus the hour angle. Thus, we can write:  HA = RA of observer meridian - RA of object
Of course, before he gets very far, he will be adept at sketching any number of diagrams to solve time and position problems, such as the diagram below - with perspective looking down onto the North Celestial pole: 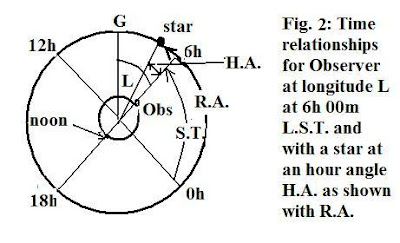 The budding astronomy student will also have to know how to sketch a three dimensional diagram to enable conversion between coordinates, say from the horizontal (observer -based) to the celestial sphere. This will always include what is called the fundamental "astronomical triangle" (shaded region of Fig. 3) from which spherical trig relationships can be obtained and conversions can be made to different coordinate systems. 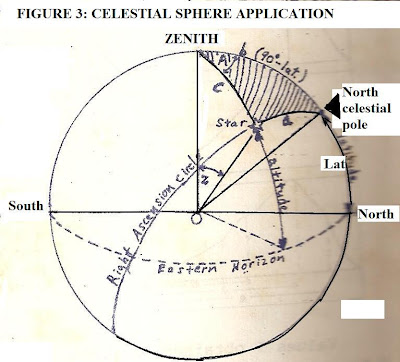 We have for the law of sines:

where A, B, C denote ANGLES and a,b,c denote measured arcs. (Note: we could also have written these by flipping the numerators and denominators).

We have for the law of cosines:

Where a, b, c have the same meanings, and of course, we could write the same relationship out for any included angle.

Now, we use Fig. 3, for a celestial sphere application, in which we use the spherical trig relations to obtain an astronomical measurement.

where A is azimuth.

Let's say we want to find the declination of the star if the observer's latitude is 45 degrees N, and the azimuth of the star is measured to be 60 degrees, with its zenith distance z = 30 degrees. Then one would solve for cos a:

Or,  decl. (star) = + 52.1 degrees
The student will also become familiar with matrix methods for converting between the different coordinate systems.
The basic principle involves relating the Cartesian coordinates (rectilinear) of a point on the celestial sphere (diagram) to the curvilinear coordinates measured in the primary and secondary reference planes. One has then, for example:

After conversion the curvilinear coordinates may be calculated according to:

Now, consider conventional orthogonal matrices of 3 x 3 dimensions, given as functions: R1(Θ), R2(Θ) and R3(Θ), to rotate the general system by the angle Θ about axes x, y and z, respectively. Thus we obtain:


To fix ideas, say you wish to obtain the horizontal coordinates (A, a) for some object in the sky and you know its R.A. and decl. from an almanac.  Then the procedure is fairly straightforward, and entails writing:
R3(Θ) = R3(-180 deg)

cos (90 - φ) = sin (φ)
Not surprisingly, it is the sophomore year at which point most wannabe Astronomy majors change their minds and either drop out entirely or change their major - say to a less mathematically demanding subject. At the Univ. of South Florida, nearly 60% had dropped out by the end of the quarter which featured spherical astronomy.
Posted by Copernicus at 7:43 AM