Dallas: The City With A 'Death Wish' In Its Eye? TIME cover image of Clint Murchison Sr., the 'King' of the Oil Depletion Tax Allowance which JFK threatened to have repealed. He is numbered amongst the right wing hot shots in Big D, ca. 1963


"For 50 years, Dallas has done its best to avoid coming to terms with the one event that made it famous: the assassination of John F. Kennedy on November 22, 1963. That's because, for the self-styled 'Big D', grappling with the assassination means reckoning with its own legacy as the 'city of hate', the city that willed the death of the president."  -James McAuley, New York Times Sunday Review, Nov, 17, p. 5

If you are a Millennial- maybe watching CBS Early Show yesterday -  then you would have possibly taken the segment with Mo Rocca's antiseptic take on Dallas to heart given you had little else to go by.  Rocca made reference to how much Big D has obviously changed since the dark days of 50 years ago, but he also belittled the extent of venom in the city back then - referring to "small  groups of right wingers" but dissing the notion that hate was entrenched.

This is in marked contrast to how the authors of the new book, Dallas 1963, document how Dallas had become a cesspool of KKK, John Bircher and Confederate hate by late 1963. This was thanks to the likes of "leading citizens" - such as c(who ran The Dallas Morning News as a prominent, anti-Kennedy hate rag), Bill Criswell- Baptist Preacher who made a thing of preaching racial and political hate, and H.L. Hunt - the oil tycoon - who used his "Facts Forum" as one of the first radio hate platforms, against Catholics, Blacks, Jews ....oh and the Kennedys.

Rocca did mention the infamous incident in which Adlai Stevenson, on a UN visit in October, was smacked with placards and spat upon by anti-UN protestors.  But this was also not made into much, other than one extreme incident. When asked by a reporter from the rival Dallas Times Herald if he hated Dallas, Stevenson- after wiping off a gob of spit and blood from a head wound - replied:

"I don't hate the people of Dallas, I just want to educate them."

Of course, he then warned Kennedy not to come on his planned November trip. Did Stevenson see more in the Big D zeitgeist than Rocca has been able to? I believe so, and so does a descendant of one of the "Big Men" of Big D (from 1963), James McAuley - a Marshall history scholar at the University of Oxford. This was in an article he wrote for the Nov. 17  New York Times Sunday Review, p. 5 ('The City With A Death Wish In Its Eye').

McAuley writes of some of these men:

"Those 'men of Dallas'-  men like my grandfather- oil men and corporate executives, self-made but self-segregated in a white collar enclave in a blue collar state- often loathed the federal government at least as much, if not more than the Soviet Union or Communist China"

"For these men, Kennedy was a veritable enemy of the state, which is why a group of them would commission and circulate 'Wanted for Treason'  pamphlets before the President's arrival."

A poster is shown below: 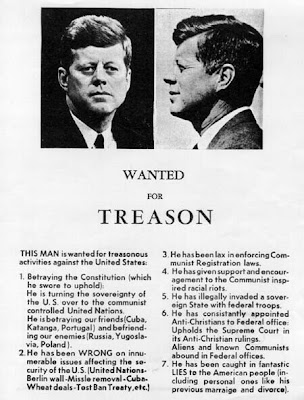 In another sentence, McAuley refers to his grandmother, taken not long after the assassination who "smiles a porcelain smile" and:

"Her eyes are intent, fixed on a target: liberalism, gender equality, gays,"

He also refers to the woman who struck Stevenson and spat upon him the month before JFK arrived noting:

"It was the wife of a downtown insurance executive, not a derelict, who struck Adlai Stevenson."

Evidently, thousands of such "frustrated" women got into Dallas' regressive politics, energized by what they saw as outside traitorous liberalism, brought to a peak by JFK's policies  - especially on integration in late 1963. According to McAuley they "turned to politics as a means of garnering the validation they were otherwise denied. With time and money at their disposal they would outdo their husbands and even themselves."

McAuley's problem with Dallas-  despite Mo Rocca referring to the Dallas Cowboys and the TV series "Dallas" as helping to rehabilitate its image (what McAuley describes as "transient triumphs in the face of what's always left unsaid"), was that it had never come to terms with its dark past. And even he admits:

"The far right of my grandparents and the radicalism of my grandparents' generation may have faded in recent years, but they remain very much alive in Dallas. Look no further than the troop of gun rights activists who appeared just days ago just outside a meeting of local mothers concerned over gun violence....if this is what counts as responsible civic dialogue Dallas has a long way to go."

Unmentioned is an earlier demonstration with gun rights Dallasites packing heat and marching down Elm Street - in front of the Texas School Book Depository (according to a number of commenters on a Dallas Morning News forum barely 3 weeks ago.  Can anyone say 'tone deaf' to history?

So McAuley isn't surprised that:

"Once again, spectacle is likely to trump substance"

Referring to a planned jet flyover tomorrow, a performance by the Naval Academy's Men Glee Club and remarks from historian David McCullough on Kennedy's legacy.  As he notes:

"Not one word will be said at this event about what exactly the city was in 1963, in what the president arrived in what he called, just moment before his death, 'nut country;"

So look for another opportunity at true redemption to pass, and the city can  dismiss the evil of November, 1963 as an aberration. Once more content in the notion that one sad-faced "commie loner" in its midst did the dirty deed - and it can wash its hands since the Warren Commission (created by a Texan) had the sense to generate the de facto scapegoat (who was killed before he could have his say).

Sadly, Dallas may never learn the lesson that 'he who forgets the past is doomed to repeat it' and that Death Wish may never abate from its Eye.

Posted by Copernicus at 9:08 AM