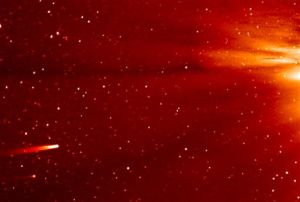 Probably one of the last decent photos of ISON  (left) taken on Nov. 25 by NASA's Stereo-A spacecraft as it approaches the Sun. Alas, ordinary naked eye viewers will miss out on what had been billed as a big cosmic show.

Well, the news is now in that Comet ISON will not be any "comet of the century" or any comet that can be seen at all, as had been hoped by many amateur astronomers and ordinary sky gazers. In that respect it appears the "pessimists" take has proven correct and ISON was over-hyped, perhaps because so many of us (stung by Halley's 1986 fuzz out) were feeling like we deserved better cosmic karma.

While NASA scientists, like Michelle Thaller yesterday, expected ISON to re-emerge from a slingshot around the Sun, they are now prepared to admit the Sun got the last laugh - and all that came out at the end of the perihelion pass was a meager trail of dust.  According to U.S. Naval Observatory solar researcher Karl Battams:

"It does seem like Comet ISON probably hasn't survived this journey."

Well, I more or less expected it as the estimates of ISON's nucleus diameter diminished - from several miles across to a factor 6 -7 less in the most recent assessments (The comet was two-thirds of a mile wide as it got within 1 million miles ). The decreased nucleus size meant much lower margin for error in making the perihelion pass. (Though some astronomers don't think nucleus size has anything to do with it since Comet Lovejoy's nucleus was 10 times smaller but it survived solar passage only to break up a few days later. But bear in mind Lovejoy approached 0.002c in slingshot speed by virtue of passing much closer, about 135,000 km, compared to ISON's 1.2 million km. So, the much higher velocity may have been the factor that spared Lovejoy).

This take of ISON's obliteration is pretty solid. Based on its dynamics, slingshot velocity etc. ISON was expected to show up in images from the Solar Dynamics Observatory spacecraft at around noon eastern time (1700 GMT) yesterday, but almost four hours later there was "no sign of it whatsoever" according to NASA solar physicist Alex Young.

"Maybe over the last couple of days it's been breaking up,"

Adding:  "The nucleus could have been gone a day or so ago."

Which seems about right.

Meanwhile, images from other spacecraft showed a light streak continuing past the sun, but Young said that was most likely a trail of dust continuing in the comet's trajectory.


"The comet itself is definitely gone, but it looks like there is a trail of debris," Young  told the AP.

This morning as I went out speed walking at 6.30 a.m. local time I did see what appeared to be a 2-3 degree long 'trail' perhaps 5 degrees above the rising Sun. It looked almost like a short bright jet contrail but jets don't travel that direction in our locale. At the same time, I didn't think it could have been ISON, the brightness (I estimated -4) was too high. Later, I read the news reports of ISON's demise.

Oh well, we will have to await another comet to really make up for this bummer. At the same time, solar physicists ought to still be able to extract useful information on the solar wind as I noted two blogs ago.